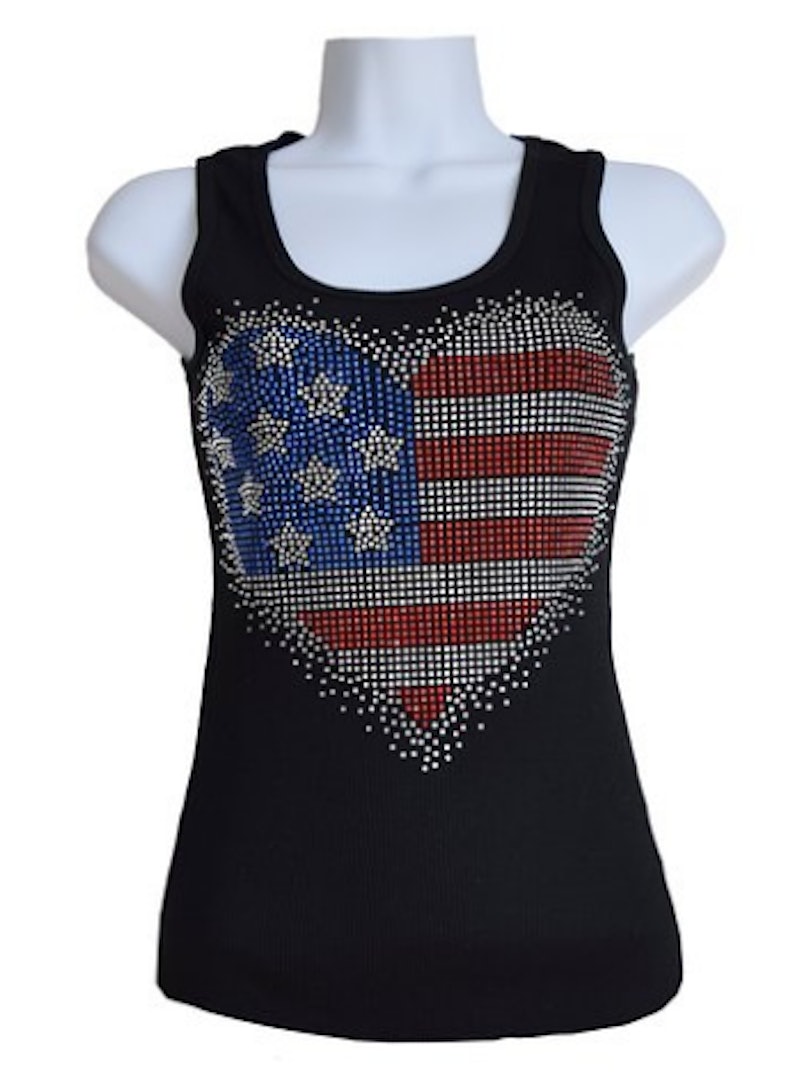 With Independence Day right around the corner, it's just about time to brush off 2015's howling coyote tank tops and star-shaped sunnies. Although in recent years the holiday has taken on a hilariously kitschy spin, Fourth of July clothes from the early 2000s were a serious sartorial proclamation. I'm not sure if this was because many of us were teens back in those cringe-worthy noughties and everything was a serious statement of identity, but meeting up with friends on the Fourth took some heavy consideration when it came to wardrobe. One couldn't just slip on some Soffes and run out the door. Who knew who might be at the park? We had to defend our spot in the teenage hierarchy with looks that could keep us relevant.

And what did a pubescent mix of anxiety and fashion look like on the Fourth? It was predominently a healthy dose of terry cloth materials and flag motifs; rhinestones and acid wash. Red, white, and blue were matched with denim skirts and surfer-brand pieces (because how lame would it look if we actually dressed up for a holiday, LOL?), and we'd regularly huddle around park fences, listening to Destiny's Child as we secretly wished it was cool to play with sparklers. Below are 11 Fourth of July clothes many of us wore in the early 2000s.

It seemed that just about everything was bedazzled in the early noughties — from jean pockets to slip-on flats — so it was no surprise that our tees would feature a healthy dose of gems scattered across them. After all, what could make the American flag more majestic than a Bedazzler set to hot?

Along with our love for rhinestones came a penchant for all things faded. Jeans were sand-blasted, pants were acid washed, shirts were frayed, and tank top prints seemed to have faded away with age. If you had a flag printed on your shirt, chances are it looked like you recently found it in a locked chest in the attic. And you looked all the cooler for it.

Made popular by Destiny's Child and the Harley Davidson obsession of the noughties (just think of Britney Spears performing with Steven Tyler in a slashed-up Davidson crop top), that handkerchief top was a real thing. Granted it probably plagued most of parents' nightmares what with its revealing nature (there was no back!), but it was red and white and totally fit the color scheme of Fireworks Day.

This was every feminine person's staple during the summers of the '00s. Whether you wore it to carnivals or mall hangs, family picnics or driving tests, you could count on this piece hanging in almost every girl's closet. So it was a no-brainer to wear it on one of summer's biggest holidays — after all, it was blue!

While probably worn with a little less panache than Carrie Bradshaw (I don't know how many teens owned Birkin bags back in the day), this was another go-to once summer break started. The iconic terry cloth dress was usually worn with flip flops and a pleather initialed handbag bought from a mall kiosk, and was the perfect getup for a group-hang.

This was like THE starter pack look of a Millennial teen: Tiered mini skirt, a ribbed tank, and quite possibly a metallic woven belt to be cinched low on the waist and over the top. If you weren't into sweating in jean shorts on Independence Day, this was likely your go-to.

Either bought during an after-school expedition to China Town or at your nearest mall kiosk, these mesh slippers were all the rage during junior high (most of us unfortunately didn't know about cultural appropriation then). Bonus points if you busted out your blue or red pair, though. There was something so American about eating hot dogs and potato salad while wearing red shoes.

Tube tops were all the rage during the crack of the millennium — like a '70s throwback but with our own twist. They were usually paired with pocketless, acid washed jeans, or baggy wide-legged numbers á la J. Lo, making us feel so on-point when it came to fashion. Just looking at this image brings back memories of Limewire and Juicy Tubes for me.

Let the sins of your past come back to you: Just try to tell me you didn't own one of these tight-legged, capri numbers. And how fab did they look when paired with halter tops and purses woven out of candy wrappers? Ideal.

No, you didn't wear it like Mr. Schuester from Glee — rather, you gave it a more rock n' roll edge. Or at least you thought you did. Paired over a tee (bonus points if it had a bald eagle on it!) and accessorized with layered necklaces, a black vest was just the thing to give your outfit some bite.

With its red and white logo, this classic tee gave off an all-American vibe that would let us enter the realms of effortlessly patriotic.

Looking back at these early 2000 wonders is making me seriously reconsider this year's Fourth of July ensemble.