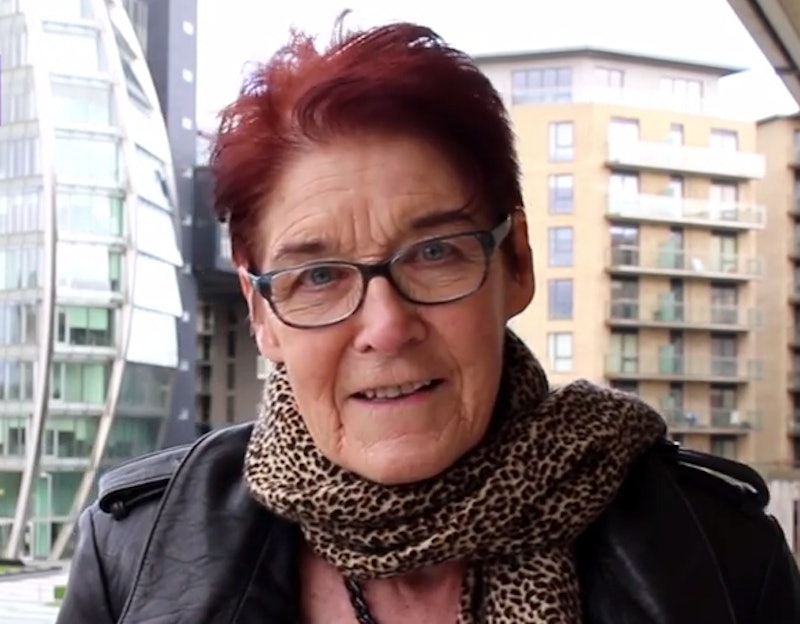 The fight for reproductive rights and physical autonomy extends far past U.S. borders, necessitating an international movement that unites pro-choice women everywhere. As the battle to make abortion more accessible in the states continues, women in Ireland are protesting their constitution’s Eighth Amendment, which bans abortion entirely unless extremely special circumstances are met. Impassioned feminist and LGBTQ activist Ailbhe Smyth is at the front lines of the movement to eradicate Ireland's Eighth Amendment and create a more inclusive society. For the past 40 years she has pushed for women’s rights, and she has great hope for Ireland’s next generation.

Smyth, the convenor of Ireland's Coalition to Repeal the Eighth Amendment, became involved in the women’s rights movement as a college student during the 1970s. When her daughter was born, she remained in the movement to fight for her rights. And when her daughter’s daughter was born years later, the new grandmother viewed the struggle as even more relevant to the next generation. Her efforts, in other words, know no generational boundaries. They apply to women of all ages who want reproductive autonomy.

Women cannot get an abortion in Ireland unless they are facing an immediate risk of death. To inspire real change, Smyth says she is going to need a sizable army which includes both strictly pro-choice activists and individuals who believe abortions should be available only to women who have been raped, subjected to incest, or face health risks. An experienced academic, Smyth understands the importance of shaping her cause as a moderate, overarching one that appeals to an array of beliefs. Although the results may not come as quickly as she wishes, she believes the approach is the most practical one for a long-lasting, successful campaign.

In June, the United Nations' Human Rights Committee declared that Ireland's abortion ban violated human rights in the case of Amanda Mellet, who was not allowed to have an abortion even after learning that the fetus she was carrying had a fatal anomaly. While many hailed the ruling as groundbreaking, it doesn't actually hold any sway in terms of forcing a change in Ireland's laws. But the abortion debate picked up again recently when an Irish woman live-tweeted the trip she had to take to England to obtain abortion services.

“I think that it doesn’t change overnight, but I do believe on the other hand that the changes that we can make in our social movements do contribute hugely to changing the kind of society we live in,” Smyth says. “So we don’t always get an overnight victory, but we are nonetheless out there helping people ... encouraging people to open their minds to other ways of being in the world.”

"They’re not going to be stopped ... they have the bit between their teeth, and they’re going to go on and keep up this struggle, and I know that we’re going to win."

Smyth has the heart of a radical activist — and is proud of it — but she also realizes that society inches forward in baby steps. That doesn’t make the solution any easier to accept, especially for those who believe women shouldn’t have to give a reason for wanting an abortion.

"You know, if we were to have a referendum tomorrow, it would be quite difficult to convince some of our own members, perhaps, that we would be prepared to accept less than full choice for women," she admits.

The process of altering legislation is tedious, but there’s an incredible sense of hope within the Coalition to Repeal the Eighth Amendment. Much of that hope stems from Ireland’s recent legalization of same-sex marriage — something for which Smyth, a lesbian, strongly advocated as a symbol of open-mindedness and acceptance. Still, there’s always progress to be made.

“I always say as a feminist that the women’s movement will be over the day gender simply doesn’t matter in any way at all,” Smyth adds. “What could be more energizing than to be fighting for a little bit of good you think you might be able to do so that people can have better, happier, easier lives, because life is difficult enough without our going out of our way, and it’s great fun.”

Although international pressure on Ireland is mounting, Irish people’s demands for change represent the most immediate, tangible force. According to a July 2016 Irish Times / Ipsos MRBI poll, in fact, 67 percent of respondents were in favor of repealing the amendment. Currently, there’s no sanction under which Ireland can be punished for not immediately enforcing the UN’s ruling, rendering it absolutely paramount that the nation's activists continue to voice their opinions to influence change.

“I do think that young Irish women and the men who are accompanying them on this road, they’re absolutely fabulous,” Smyth says. “They’re not going to be stopped, so I may fade away, and other women of my generation, but they have the bit between their teeth, and they’re going to go on and keep up this struggle, and I know that we’re going to win.”

Smyth admits that though she can be shy, she’s not afraid to seriously “kick ass.” But she reminds us all that that’s not the only way to make people think twice about the norms society arbitrarily creates. For example, we can share ideas on the internet. We can do research on social rights as academics. We can simply have conversations with other people. Like she says, if you feel a wave of passion coming on, just go with it. Because we can all make a dent in society’s rigidity.