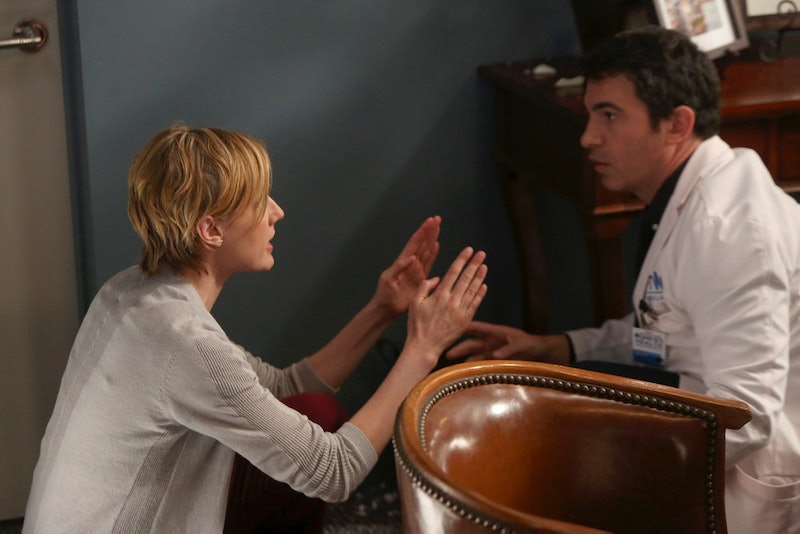 As thrilled as I am that Mindy/Jody fizzled out (hopefully) before it even got started, it does mean that Mindy is yet again back to a romantic square one. Not only that, but Danny Castellano is engaged on The Mindy Project to a nurse at his new practice named Sarah, played by Greta Gerwig. I know he hasn't been on the show more than sparingly, but when did that happen?

The casting of Sarah, I have to say, is kind of brilliant. Before The Mindy Project pilot in the timeline, Danny was married to Christina, who is woman played by Chloe Sevigny. Just in terms of the independent film world, Gerwig is the perfect successor to/combination of Sevigny and Kaling.

Also, as Morgan said, she's got a fun energy. Sarah doesn't strike me as the perfect match for Danny, by any means, but she is a fun character. In the episode, we learned that she'd stalked Mindy so much online that she had developed an obsession with her. As someone who has definitely become way too involved in the social media lives of people I have never met, for various reasons, I appreciated that character detail.

Will this relationship last? Danny hasn't told Mindy about his engagement, which is major. Wasn't it only a handful of episodes ago that Danny was dating that woman named Eliza, who greeted Mindy and Leo at the door while Danny was showering? This is happening awful fast, even by sitcom standards. Season 4's finale is titled "Homewrecker," so I think we can figure out where this is going — at least on some level. Whether it's with Mindy and Jody (shudder) or Danny and Sarah, whatever Season 4 of The Mindy Project has been building towards is going to be big.