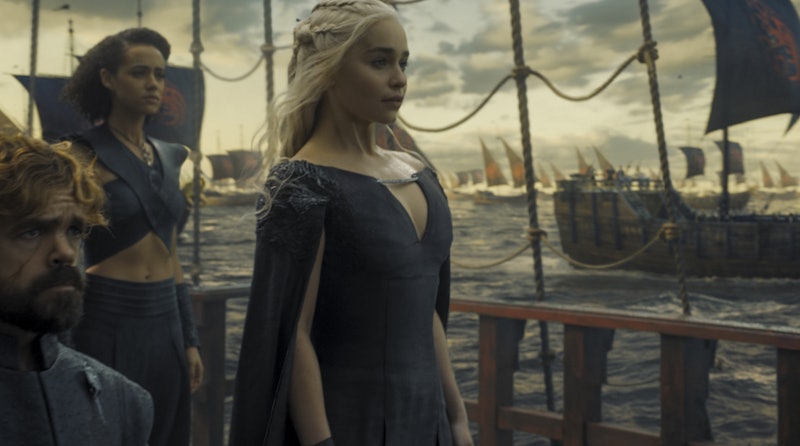 Daenerys has been a straight up badass in Game of Thrones for so long now, it's hard to remember when she was simply a scared young woman and practically a slave to her jerk brother Viserys. But it's true: There was once a time when our favorite Targaryen was not yet a conqueror and dragon mother. In fact, in the premiere episode, Dany was actually pretty timid! Though we get a slight glimpse of her potential power, at the time, she was still not ready to rise up to her full potential. But now, at this point in the show, a lot's has happened since she was up for sale to a Khal Drogo — Daenerys has changed a lot since the the beginning of Game of Thrones.

Since the premiere, Daenerys has not only formed a solid squad and gathered a lot more tools for dominating (as we learned in the Master's attack on Meereen, dragons really nail the destruction thing), but she has also become incredibly confident in herself. The girl who was essentially a slave has now turned into a brave and sometimes cold-as-ice queen. It has been a pleasure seeing Dany grow from just an on-the-run Targaryen to Daenerys Targaryen, Khaleesi of the Great Grass Sea, Breaker of Chains, Mother of Dragons and soon-to be Queen of the Andals, the Rhoynar, and the First Men, Protector of the Realm. These are the ways our dragon girl has changed since the premiere.

The most obvious gamechanger and definitely the most serious. How many people can brag that they have not one, but three dragons? Only one person.

#SQUAD. Not only does Dany have the Unsullied, the Greyjoys, the Dothraki, the Dornish, Olenna Tyrell, and a horde of former slaves, she's also got her main WOEs: Grey Worm, Tyrion, Missandei, and Varys. Gosh, what a dream team.

3. She Got Rid Of Her Terrible Brother

4. She Can Speak A Zillion Languages

As a conqueror, it's important to know all the languages of the places and people one rules. Dany already spoke the Common Tongue and Valyrian, but she made it a point to learn Dothraki when she was a Khaleesi. She gets to know the cultures of the places she's got control over. Which is a delightful trait.

5. Her Sense Of Style Has Drastically Improved

She looks like a queen all the time rather than a fairy princess. In fact, it seems she now dresses how she wants to dress —and can often be seen wearing pants and combat boots under her flowy, Grecian-inspired dresses, likely in case she finds herself in a battle-like situation. It's awesome.

Loving a man and then losing him to something as silly as an infected wound (with a little added magic here and there) is tragic — it changes a person. Though I obviously felt devastated for our girl when she lost her Khal, it was also exciting to see her barrel out of his shadow.

Remember when she crucified all those Masters? I do. I can't unsee it. The Teen Barbie version of Daenerys would never have done that.

8. Her Heart Is Not As Ready For Love

Daario Naharis — sure, he's a babe, but you've got to be a straight-up king to win Dany's heart these days. That's why she was like, "peace homie, I'm off to Westeros. Smell ya later." Now, she's a Mother of Dragons, and not just anybody can be a dragon stepdad.

9. She Has High Aspirations

In the premiere episode, the exiled princess only aspired to be a Khal's wife, and to not be stuck with her crappy brother anymore. She believed the Iron Throne was meant for Viserys. But, with him out of the way — it's ripe for the taking. Her taking.

Literally everyone who has ever crossed Daenerys has either ended up as dragon food, burned with molten gold, or been murdered some other gruesome way. We can only assume she feels a lot more confident in her survival than she did back in the day.

11. She Is Less Trusting

Dany's been duped a few times since the premiere: by the witch Mirri Maz Duur, by the Sons of the Harpy, by those dudes in the House of the Undying. But she's learned a thing or to since then. The only people who she rolls with are the ones she can super trust.

We can assume Dany had an inkling fire wasn't a big problem for her, as she was able to hop in a burning hot bath in the premiere. But it was unclear if she knew her true power at the time. She certainly knows now, though, and is very down to use the skills.

In fact, the only place she hasn't seen these days is King's Landing! Season 7 seems like a perfect time to fit in that travel destination, doesn't it?

As they say, "fake it 'til you make it." Daenerys has been acting like the ruler of the Iron Throne for so long — all regal and listening to advisors but making only her own rules — she's totally ready to take on the job as queen now.

Over the course of 6 seasons, Daenerys has turned into quite the reliable contender for the Iron Throne. With all she's been through, she's a completely different girl than the one from the premiere episode. All hail Khaleesi!

More like this
Emilia Clarke Shares More Details About The New 'Game Of Thrones' Series
By Maxine Harrison
Twitter’s Reaction To HBO’s ‘Game Of Thrones’ Jon Snow Spinoff Idea Is Chaotic
By Stephanie Topacio Long
“The Door Is Always Open” For Another 'Breaking Bad' Spin-Off, Says AMC Boss
By El Hunt
Neil Patrick Harris Will Play 'Doctor Who's “Greatest Enemy” Yet
By El Hunt
Get Even More From Bustle — Sign Up For The Newsletter