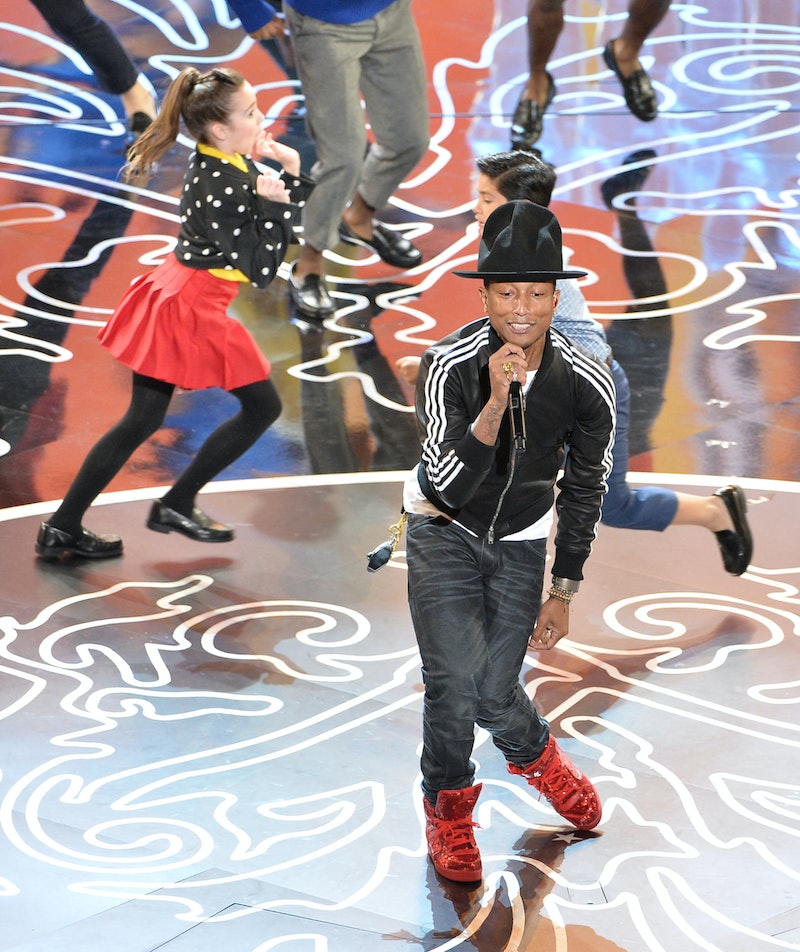 From one fashion statement to another. Pharrell ditched his questionable "shux" from the red carpet in favor of black version of his now-famous Vivienne Westwood Buffalo hat for the first performance of the 2014 Oscars. The singer performed his Best Original Song-nominated hit, "Happy" and it looked a hell of a lot like an Old Navy commercial.

We're still trying to figure out why (and how) Pharrell held that pose for so long at the end of the performance, but there are some indisputable realities from that performance. Three great things emerged — Lupita Nyong'o dancing, his Wizard of Oz ruby slipper-esque kicks, and the face of that adorable kid standing behind him at the start of the performance. We may not see a better thing tonight than Nyong'o dancing and we may not want anything more than those shoes. Seriously, where can I get some?

Pharrell got two Best Actress nominees on their feet as well — so we won't give all of our attention to Nyong'o. Meryl Streep and Amy Adams also busted a move to the hit from Despicable Me 2 and if Meryl is dancing, that's a HUGE approval nod. They obviously weren't as weirded out as we were by the Old Navy-vibe we were getting from the performance. Because, NO ONE CAN DENY, that this was an Old Navy commercial — from the costume design to the synchronized dancing and that gigantic, animated smiley face with a matching Buffalo hat.

Old Navy everywhere and seriously, WHY did he hold that pose for SO LONG?