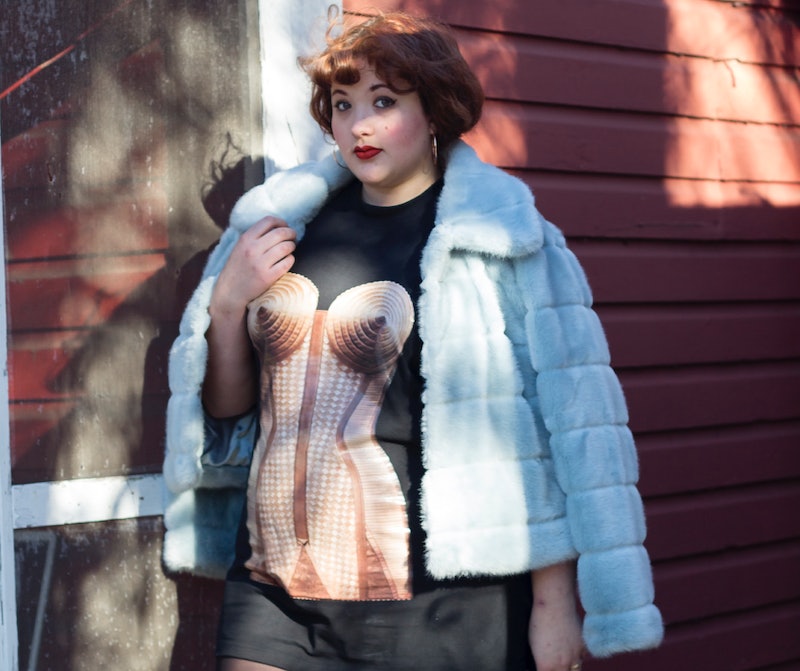 When was the first time you felt fat? Perhaps it was that time you tried on a flouncy dress that made you take up more space than you might usually, or the moment you realized your tummy wasn't as flat as that of the runway models in those glossy magazines. Maybe it was when a classmate poked fun at your double chin — visible only when you laughed or took a photo from a downward angle; or when those too-tight low-rise jeans circa 2005 dug into the space between your hips and lower stomach so much that a roll of flesh was formed before your eyes. Most people, especially women, have uttered some derivative of, "I feel so fat," "This outfit makes me feel fat," or, "I've eaten 'too much' lasagna and now I feel so fat," in their lifetimes. Most of these people, I'd wager, aren't fat themselves. They've simply learned to equate the F-word to a whole rubbish pile of ugliness.

In contemporary Eurocentric cultures, the word "fat" lives in synonymity with a lot of other words; words like "ugly," "undesirable," "unflattering," or even just "full." Fat has become a moniker used by folks of every size when they don't particularly think they look great; when their bellies are bloated after a big meal or some holiday weight gain has taken them from a size six to an eight.

Fat, however, is not a feeling. It's not an emotional state or reaction. In its most technical definition, it is simply "a natural oily or greasy substance occurring in animal bodies." We can therefore have fat, without actually being fat.

In its more generally accepted definition, fat is a body type. And one most fat people are likely exhausted of having co-opted by the masses who've decided said body type is among the worst things a human can possess. By people who don't realize that in saying, "This outfit makes me feel fat; I hate it," what they're really saying, be it intentionally or not, is, "This outfit makes me look like you. And that is unacceptable."

Fat Is Not A Feeling T-Shirt, $25.84, redbubble.com/beloknet

The phenomenon is particularly troubling when it happens in the presence of actual fat people: When the mom or BFF or brother of a self-identified fat goes into a dressing room, tries on a new ensemble, looks in the mirror, and makes a negative observation about how fat (read: hideous) they think they appear. Or when, at lunchtime, a dad or friend or classmate or colleague eats three hot dogs instead of two, then proceeds to persecute themselves for their lack of self-control and newly-cultivated obesity.

Such people don't realize that in utilizing a body type as a substitute for every negative thought they ever have about themselves, they only further contribute to the stigmatization of that body type. They probably don't realize that they risk chipping away at anyone's identity — fueling the marginalization of an identity already frequently denied health care, poorly misrepresented in most media, and constantly on trial for simply existing.

This isn't to say they're always purposefully trying to further shame their fat friends or family or acquaintances. Fat-phobia is funny that way. For some, it's expressed through the Twitterverse: Blatant requests sent to the fatties of the Webosphere urging that they "kill themselves." For others, it's internalized: The fear of becoming fat themselves far scarier than the fat people living and breathing around them. But regardless of the intent or awareness behind an "I feel fat," statement, the end result is always the same: More shame, disgust, dissatisfaction, and hatred landing on the chubby laps of the real fats already living in a world where something as innocuous as wearing swimwear to the beach can make them the target of vitriol.

In the aptly-named essay "My Friends Would Rather Have Their Guts Cut Open Than Look Like Me" for women's multimedia site The Establishment, writer and author Meg Elison discusses going through existence as a human surrounded by people willing to do everything and anything not to be fat like her. From the extreme weight loss surgery her mother would undergo (one that would mean she'd later risk blacking out upon eating a Starburst) to the subsequent surgeries of friends to the general low-cal dieting almost expected of women, she learned early on that there was little in this world people would not sacrifice to no longer feel fat. She, however, is no longer passively accepting that this should be the standard.

Thin people talking diets fill me up with liquid murder. I cannot abide their careful warding, hanging up knots of garlic and crossing themselves three times when they see me coming. I will not listen to their terrified superstition or their smug pseudoscience when they tell me again and again what they are willing to go through rather than become like me. When their talk rolls around to calories and their moral obligation to hate themselves, I typically spread out as wide as I can. I can expand like a jellyfish; it is a particular advantage of the very fat.

Elison does not apologize for her body once in that piece. Instead, she asserts her right to live and thrive in the body that she has. She knows "there are worse things a person can be than fat." But what other people don't realize is that whenever they equate the F-bomb to corruption or failure or ugliness or ill-fitting-anything, they're saying the exact opposite.

We cannot underestimate the power of saying what we mean. Euphemisms rarely seem to help a situation. Saying "you feel fat" when in actuality you feel stuffed, or you feel like a dress isn't for you, or you feel sweaty after a particularly good bang-session isn't aiding anyone or anything. This does not, however, mean that "fat" is never an appropriate adjective for anyone.

An op-ed in Huffington Post earlier this year went through a mother's decision to essentially ban the word "fat" from her household and from the vocabularies of her daughters. She acknowledged that "feeling fat" is very rarely about "being fat," but she still did not want the perceived negativity of the F-word to impact the lives and psyches of her children. While I applaud her, a straight size person, for being conscious of not using the "I feel fat" tagline, banning the word fat does not feel like the solution to marginalization of actual fat people.

To ban it is to imply that it is inherently bad: That there is never an instance in which is can be used positively, if even neutrally. It denies the existence of the fat acceptance movement, and the many fat people reclaiming these three letters as a source of empowerment and personal identity. It denies that fat is an essential component of survival. And it does very little to tackle the prejudices that lead to so many fat people being treated as sub-human. What would happen if this mother's daughters someday became fat themselves, after being specifically told that this was an unacceptable word? What would that identity crisis look like?

Instead, we need to simply understand that "fat" is not an umbrella term for ~literally every bad word you can think of.~ It is not a feeling. It is not an aesthetic for the thin to overtake when they are having a bad day. It's not a characteristic meant to be utilized by the non-fat when they need to be reassured that, no, they are in fact not a whale: That they are OK; that they are good.

"Feeling fat" should be reserved for the actual fats: The fats who have to live and breathe and survive when frequently faced with a barraging of trolling and abuse; the fats whose rolls are so visible in that tight dress that they feel ever fatter and (hopefully) even more fabulous; the fats who have fought long and hard so that their sheer existence isn't justification for their discrimination; the fats who are thriving, and who will continue to do so, even when much of the world "feels" like they shouldn't.

More like this
The 12 Best Strapless Bras That Won’t Slip & Fall Down
By Audrey Williams and BDG Commerce
Androgynous Formal Wear That Will Make You Feel *So* Fancy
By Megan Lasher
40 Expensive Mistakes You're Making Inside & Outside Your Home
By Mackenzie Edwards
The 5 Best Rugs That Cats Can’t Destroy — & Why Your Cat Scratches, According To A Vet
By Danielle Calma
Get Even More From Bustle — Sign Up For The Newsletter