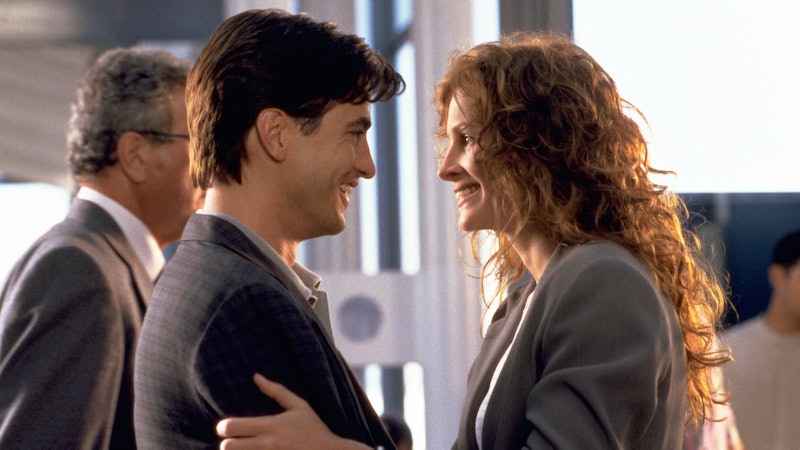 In 1997, a little movie called My Best Friend's Wedding subverted the whole romantic comedy genre, and I don't just mean by refusing to let the girl get her guy. This movie is a rare gem because it features a heroine with actual, real-people flaws and not just cutesy quirks. Julianne (or Jules) isn't just clumsy, she's dismissive of other people's feelings. She's not just a gossip, she's a saboteur. (And she's played, of all actresses, by minted America's Sweetheart Julia Roberts, toying not for the last time with her good girl designation.) How many rom-coms boldly ask their audience to root for a female anti-hero? But Jules isn't the only character behaving badly in this film. I've never had a problem with the ending of it, because I don't think the object of her obsessive quest deserves her anyway. I am sorry, but Michael from My Best Friend's Wedding is terrible.

"But he's the leading man!" you may say. Debatable. The whole genre is turned on its head in this movie, so the roles aren't quite so defined. Here's a quick story refresher: food critic and guys' girl Jules gets a call from her long-time buddy and casual ex, Michael (Dermot Mulroney). He's getting married to Kimmy (Cameron Diaz), a woman Jules has never met, and she confuses her shock and jealousy for love. Jules travels to Chicago with a scheme to ruin the wedding and steal Michael back for herself. Her editor and gay best friend George (Rupert Everett) offers reality checks and moral support by phone and in person. The whole endeavor blows up in Jules's face, but she finally learns how to let Michael go.

Maybe that would have been more of a problem if Michael weren't such a royal jerk. Here's why I still can't stand the guy, almost 20 years later.

You know how these go. Two friends who are teetering on the line between platonic and romantic promise each other that if they're not hitched to other people by a certain age, they'll get married. In what solar system is 28 a drop-dead deadline age for marriage? Even for 1997, I don't buy it. Jules tells George that the whole thing was Michael's idea. It would be.

Michael and Jules haven't been a thing for years, and Jules prides herself on not being obsessed with romance and relationships. But she's still a person and she's still his ex. Michael drops this marriage bomb on his "best friend," then shoves her into an intimate friendship with the woman he's chosen (over her, in Jules's mind) to spend the rest of his life with. He never once asks her how she feels or checks in on her at all. You can see how Michael puts the women in his life into boxes: Kimmy is the girly, high-strung one he wants on his arm; Jules is the tomboy who he can complain to about her. Gross. And unfair to both of them.

He Doesn't Get That Kimmy Has A Life, Too

Granted, it's the backhanded orchestrations of Jules that lead Kimmy to confront Michael about their immediate future plans, namely that the 20-year-old will drop out of college to follow her sports writer husband around the country. And that's a fine choice to make if that's what she really wants. But Michael's panicked and accusatory response to Kimmy's second thoughts...that's a glaring red flag. What's your problem, dude?

He Flirts With His Ex, Days Before His Wedding

This is not OK!

I'm just sayin', I think Jules dodged a bullet with this one. I'd rather dance my life away with George than get stuck being Michael's road wife.