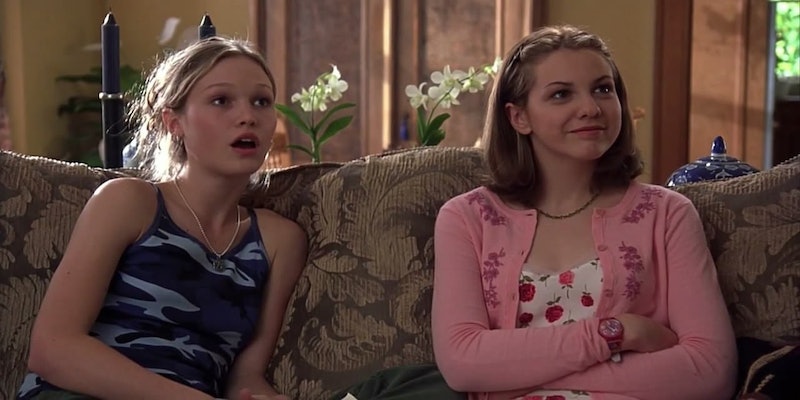 When I look back at the movies of the '90s, one thing starts to become clear: It was just the beginning of the age of female-centric movies. Aside from a few female-led '80s classics — such as Dirty Dancing and Working Girl — the '90s really jumpstarted a revolution of "chick flicks" and the more female-focused perspective that emerged in the early 2000s and continues to move forward today. Seriously, would we have classic movies such as Erin Brockovich, or even Mean Girls, if the women-led movies of the '90s didn't already pave the way? Because, overall, the '90s were full of movies that women need to watch.

But before we give praise to the amazing female movies of the 2000s and beyond, I feel as if it's important to go back to the boom. It's time to pay tribute to those movies of the '90s, because, if the '90s knew how to do anything, it knew how to bring the struggle of what it's like being a woman — and even a lovestruck teenager — onto the big-screen. And there's a reason why these '90s movies are deemed instant classics in my book. From the struggles of finding love, to picking the right outfit, to bonding with your family and finding yourself, these '90s classics are sure to not disappoint.

Being a teenager in the '90s was hard... Even if you were rich, popular, and always got your way. Basically, this movie proves that no matter who you are, or how in control you think your life is, the struggle to find love and get the relationship you want is still there. With some hilarious humor and not-so-subtle wit, Clueless is a '90s movie you have to see if for some reason you already haven't.

This movie is the '90s movie that is just all too real for any teenage girl (or even beyond that) who is struggling with breaking down her walls and letting love in. Its concept is based off of Shakespeare's "The Taming of the Shrew," and, overall, following your gut and falling for the bad boy are all brought to the forefront in this one.

If there's any '90s movie that defies female stereotypes, it's this one. It's the ultimate story of finding unlikely love and learning to not judge a book by it's cover. And, honestly, Julia Roberts and Richard Gere are a total dream when they are together.

If you were ever the nerdy outcast that didn't fit in, then this is just the movie for you. It proves that love can grow even when you least expect it and it has all of the stereotypical '90s prom feels that we just don't seem to get in our movies today.

When you really think about it, this movie's plot is seriously messed up. Step-siblings betting the potential for a relationship between them at the cost of taking another girl's virginity just sounds really weird when you state it clearly like that. However, Cruel Intentions is still the '90s movie to see when it comes to the topic sexuality and its overall meaning.

If any movie can teach you about the pains of love and loss, it's this chilling romance of the '90s. From the romantic pottery scene to Whoopi Goldberg's bits of wisdom, this movie has it all. And a young Patrick Swayze is always nice... not going to lie.

I'm a little bit biased when it comes to this movie since it's one of my personal favorites. However, there are many reasons why this movie is a must-see for all women aside from its tearful moments and a young Leonardo DiCaprio. In fact, this story is the perfect example of a woman breaking out of her comfort zone and following her heart. I mean, she literally jumps out of a boat that could lead her to safety to do what she feels is right. Rose is just plain brave.

This movie just screams female empowerment. From defending themselves to going out on their own, these two criminal women sure know how to kick some serious butt. If you haven't already seen it, add it to the list.

Falling in love with your best friend. It's something that most women have experienced at one point or another over the course of their awkward dating history. However, this movie puts it at the forefront of its conversation, and it is just too relatable at times.

Based off of the book by Amy Tan, this story of a family of different Asian women across generations is full of heart-breaking and enlightening stories. This movie is not only a must see for anyone who can relate to the culture, but also an all-around look at what women must go through in this world in order to survive.

Who knew that a story taking place in the 19th century could still be so relatable? While this book-to-film adaptation was originally made in 1949, the 1994 remake holds all that we fell in love with and more. Little Women emphasizes the importance of a bond between sisters, family, and loved ones, because living the adult world is not easy on any terms.

Balancing career and your love life can be a struggle that women know all too well nowadays. And, while this might be a very unique perspective on that situation, it still brings the laughs and the moments that really seem to understand it all.

OK... I think it's safe to say that the way we connect with possible partners over the Internet has changed a bit since this movie has been made. But, in the end, that awkwardness of talking to someone over the Internet is still very relevant. In fact, I would say that now that concept is more relevant than it's ever been.

Mental illness is a conversation that is often avoided out of fear or an overall lack of understanding. However, a film that captures the very real daily struggles of these women — although not in our modern time period — is still something that is worth noting.

These are far from the only films that the '90s had to offer women, and each of them have a lot to teach, whether it comes to what to do, what not to do, what to learn, or what to find problematic. These films are cornerstones of the '90s female experience, and now's the time to give them another watch.