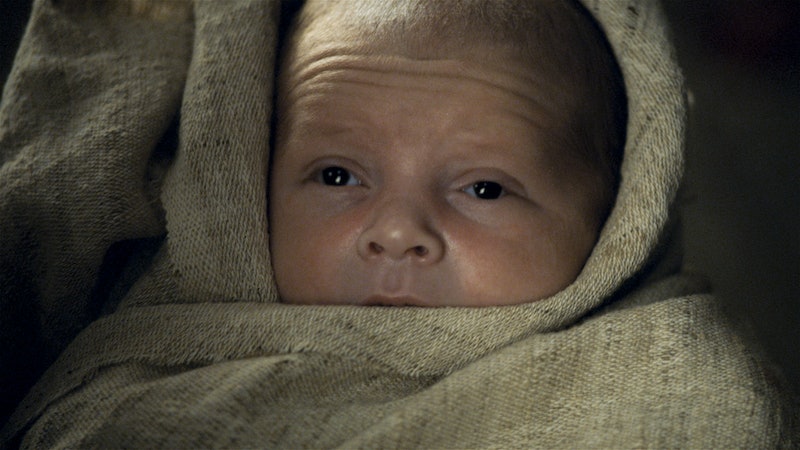 I know we’re all still processing that extra long, super eventful, and satisfying Game of Thrones finale, but we have to talk about that major fan theory which was finally confirmed. Yeah, I'm talking about the Game of Thrones R + L = J theory. In the finale, we learned that the Lyanna Stark is indeed Jon Snow's real mom, but the father part was less clear. Fortunately, HBO has now confirmed that Rhaegar Targaryen is Jon's father.

So let’s talk about that big scene in the Tower of Joy. Bran’s visions finally revealed the moment Ned Stark found his sister Lyanna bloody from childbirth. But the scene has no verbal confirmation that the baby was Rhaegar’s son, though it seems painfully obvious, given the context. A.) She was in the Tower of Joy for some time. B.) Jon’s identity had to be kept secret because of the war against the Targaryens — which Lyanna’s abduction started. Lyanna’s relationships were recently illustrated on this epic infographic from the official Game of Thrones site, in which the cast of characters' familial relationships are plotted. Contained within is the Rhaegar confirmation.

In the episode, we finally see that Ned’s sister’s dying wish was for him to keep her baby safe. If the annoying whispers (seriously, that’s a cheap way to draw things out) made it hard for you to accept R + L = J at first, I understand — and I'm here to help. Not only did HBO confirm the news in their family tree, but here are all of the other pieces of evidence that hinted at Jon's dad being Rhaegar Targaryen.

A Rhaegar And Lyanna Romance?

The story that was told following the war and takedown of the Targaryen dynasty was that Lyanna was kidnapped and raped by Rhaegar and that, coincidentally, Ned Stark had a bastard son as the war ended. Well, we now know that Lyanna gave birth to that child, and that Ned’s parentage of Jon has been debunked. Whether Rhaegar took Lyanna against her will, I'm not so sure. There has been some evidence given that Rhaegar had feelings for Lyanna — like when Littlefinger explained how Rhaegar gave a garland of winter roses to Lyanna and not his wife. Whatever the case, we know for sure that Rhaegar had an interest in Lyanna, ran away with her / kidnapped her, and that she gave birth to his child.

Redditor sparkledavisjr decided to investigate Lyanna’s whispering in that finale scene, and determined that she says, “His name is …” Then the audio becomes unintelligible, but the user believes she says Jaehaerys. Sparkledavisjr explained the origin of this old Targaryen name:

Jaehaerys would be a good pick as the name isn’t associated with any real negative connotations, like Aerys, Maegor, etc. Not only is Jaehaerys the great-grandfather of Jon, he was the King who received the ORIGINAL PROPHECY about the prince who was promised from the woods witch with Jenny of Oldstones.

For the record, Bustle's Leah Thomas predicted this name for Jon a whole year ago, and then again after the whisper scene.

Ned was an honorable man who raised his sister’s child alongside his own — but not necessarily like his own, legitimate children. Bustle's Jefferson Grubbs previously noticed that there's a moment in the book A Game of Thrones when Ned makes a mental list of his children and Jon is absent:

Ned thought, If it came to that, the life of some child I did not know, against Robb and Sansa and Arya and Bran and Rickon, what would I do?”

The same article also presents further evidence of Jon’s relationship to Ned with yet another book quote from Ned. He says, “Never ask me about Jon … He is my blood, and that is all you need to know.” While Ned loved his sister, his hatred for Rhaegar is likely what caused Jon to often feel like an outsider during his childhood.

While it wasn't easy for Ned to oppose Robert, he did not support him when he wanted to kill Daenerys. Given Ned’s protection of Jon Snow, it would make sense that he would be opposed to killing Targaryen children.

A Targaryen Alone In The World…

Maester Aemon cryptically says about Daenerys, “A Targaryen alone in the world is a terrible thing,” just as Jon Snow walks into the room. Given the parallels between Dany and Jon, this is no coincidence. They are two Targaryens who have navigated the world alone, likely to find each other… There’s also Tyrion, which is another story for another day.

OK, Game of Thrones, I get it. You wanted to drag the plot out a little longer. But it turns out we had all of the evidence we needed, short of a “Ned Stark, you are not the father” paternity reveal on Maury. So now that we know, when will Jon know? Ugh, Season 7 can’t come soon enough!