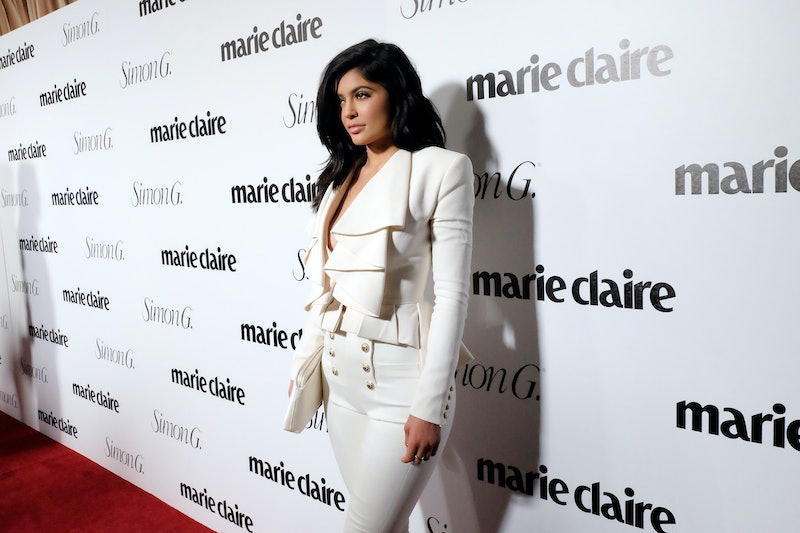 She's all about those nails. Kylie Jenner is known for her nail art and once admitted that she sometimes spends north of four (!!!) hours getting her nails did. That's like half of a work day for most of us. But Jenner does have some boss AF manis in her repertoire and which dot her Instagram feed. Remember when she rocked Puma-branded nails, since she is a brand ambassador? Those were pretty amazing. While she sure knows how to represent the athleisure brand, her latest manicure nods to her own Kylie Cosmetics. Jenner Snapchatted a manicure with the signature Kylie Cosmetics dripping liquid lipstick logo.

Jenner was sharing Snaps while getting her nails done, lamenting how her claws have grown out and she was desperately in need of a refresh and a mani. She also Snapped a shot of long nails with a white base and the black drip. One can only assume that this is Jenner's hand and her manicure, because duh! Kylie Cosmetics is hers and it was on her Snapchat. Plus, the watch looks familiar.

Even though her Kylie Lip Kits (and Kylie Glosses and Metal Mattes) sell out on the regular, even with more frequent restocks, a Kylie Cosmetics logo mani is a great way to further the brand.

Observe the Snap below. It'll make you wish she would launch a line of Kylie Cosmetics nail lacquers next.

Those are some killer talons! The squared off tips and the long length allow the Kylie Cosmetics "drip" to be instantly recognizable to fans of the brand.

Jenner and her BFF Jordyn Woods were desperately seeking manicures.

ICYMI, this was the Puma mani. That's some serious artistry right there, especially since the canvas is so small. But the gritty texture of the silver polish and the care put into the Puma logo are unmesswithable.

I would love to see Kylie Cosmetics do nail polishes in the same shades and finishes as the Lip Kits, Glosses, and Metal Mattes.