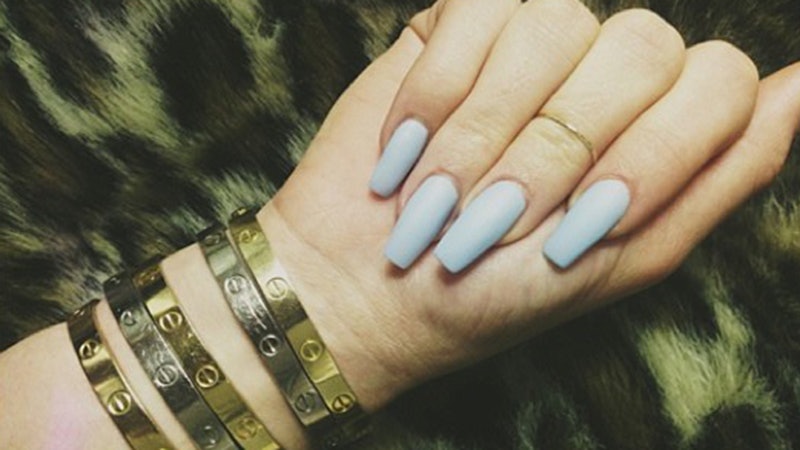 Kylie Jenner is not one to shy away from making a statement. That means with her fashion, her makeup (Hello, those lips!), her accessories, and of course, her nails. So naturally, the reality star's Instagram is an abundance of pics of her flaunting the aforementioned categories. Of course, as a Selfie Queen, (if you do follow Jenner on Instagram) you can catch glimpses of her claws in the majority of her photos. Kylie Jenner's nails are always long, they're always sharp, and they're usually some neutral or pastel hue. On occasion, however, she allows her talons the spotlight so we can ooh and ah (and sometimes question how she does certain things like type on a keyboard or open containers, and then wonder if those are things she even has to do herself, but that's another story) at her perfectly manicured tips.

But it does seem as though mom Kris has had some influence on her youngest's sense of style. If you're familiar with the family's eponymous show, Keeping Up With The Kardashians, you'll know that Kris loves a black-and-white color scheme. It's everywhere from her floors to her wardrobe. And Kylie seems to agree, frequently rocking some similarly colored tips. So if you're trying to Keep Up with Kylie's Nails, I've got you covered. Here's how her manicure style has changed over the past couple of years.

Back in the day when she kept her nails at a practical length. But still pastel.

This bright blue color was definitely a shocker to find, though.

Ah, one of the early signs of Mama Kris's influence.

But then she took it up a notch with bedazzled talons.

Yes, I'm sure she would match the interior of her house perfectly.

How about a little bit of color with those claws?

But I really can't blame her for all these neutrals. I'm a sucker for 'em too.

Love the pattern, but these nails have got me thinking, "you'll [poke] your eye out," a la A Christmas Story.

But going back to color means back to stiletto nails (and enough Love bracelets to pay a college tuition).

As much as I love the classic nude squoval, it makes it all the harder to remember she's still only 17.

And we're back where we started (though with a little extra length). Color looks good on you, Kylie.