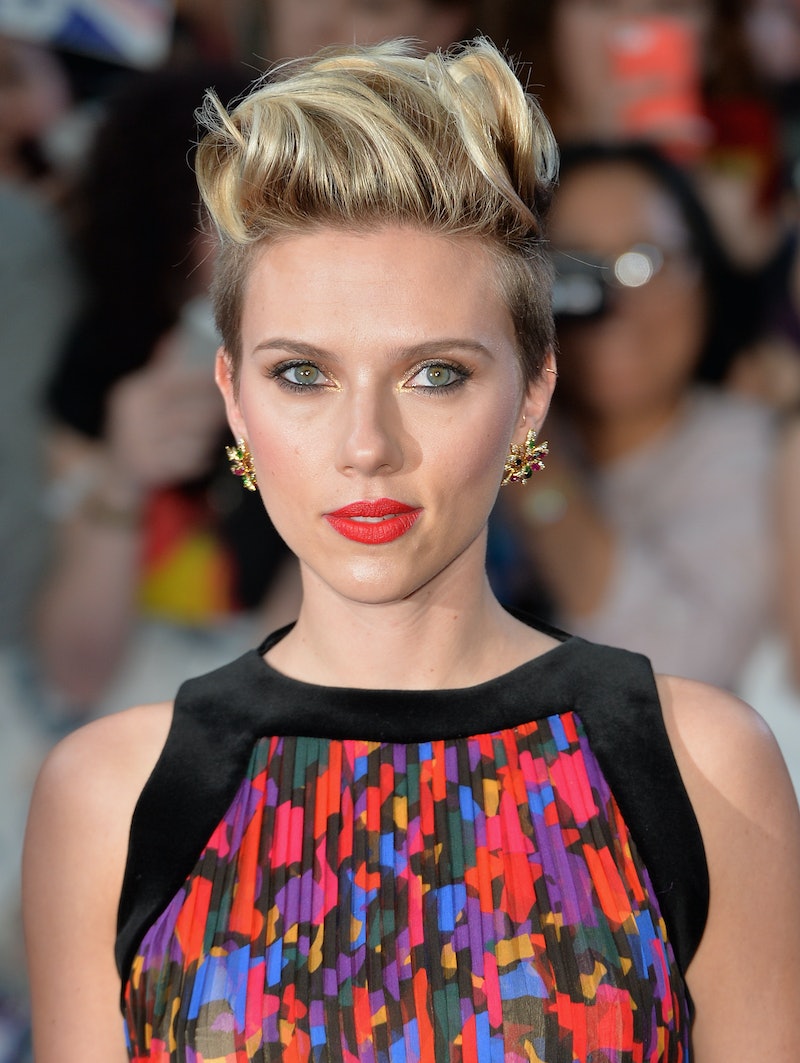 When it comes to the Hollywood stars whose movies pull in the big numbers, Scarlett Johansson has the honor of being the highest-grossing actress of all time. Not to mention, she's the only actress to make it into the Top 10 of the list created by the website Box Office Mojo, landing at No. 10, with her films reaching a combined revenue of $3.3 billion. Cameron Diaz is the next-highest-grossing actress, coming in at No. 19 with over $3 billion. Only six other actresses even made the list of 50. This list is a little skewed, being that it tallies the gross of every film an actor or actress has been in — not starred in, just appeared in. This explains why Anthony Daniels, who's played C-3PO in every Star Wars movie, is at No. 15.

But despite the fact that Johansson's high-grossing films don't solely hinge on her star power — they're mostly ensemble pictures like The Avengers — she's a big important part of all of them. So big, in fact, that this list should encourage Marvel and its parent company, Disney, to start thinking very seriously about finally making that Black Widow movie ASAP.

Since first appearing as Natasha Romanov in 2010's Iron Man 2, Johansson has been in four more Marvel films: 2012's The Avengers, 2014's Captain America: The Winter Soldier, 2015's Avengers: Age of Ultron, and this year's Captain America: Civil War. This list puts her in as many Marvel films as Captain America's Chris Evans, who comes in way down the list at No. 48. (Robert Downey, Jr., who's played Iron Man in seven Marvel movies, gets the honor of being the fifth-highest-grossing actor of all time, with nearly $4 billion.)

Black Widow always lends support to her superhero friends like Captain America and Iron Man, but she's not just a second fiddle, which shows in the amount of screen time Johansson has clocked throughout the Avengers series. Vulture found that in the original Avengers, Black Widow spends 33:35 minutes out of the film's two hour and 23 minute runtime onscreen, coming in right behind Iron Man (37:01) and Captain America (37:42). The website also found that Black Widow had the "most unbroken dialogue scenes" out of any of the six main characters.

For those who think her prominent presence is just the case with one movie, know that Johansson spent 33:07 minutes onscreen in Age of Ultron. It's seconds less than her last go-round, and once again falls short of Iron Man (45:34) and Captain America (50:25). Since screen time is often linked to a character's importance to a story, it wouldn't be incorrect to say that Johansson's Black Widow is the third most important character of the Avengers franchise, behind two characters who have each already racked up three films of their own. She's by far the most featured character out of the remaining original Avengers — Hawkeye and Hulk — who have yet to get their own movies. In Age of Ultron, filmgoers even got to see a bit more of her traumatic past, which would clearly make for a great origin movie.

Marvel needs to treat Johansson as if she's an important piece of their record-breaking cinematic universe. Not by teasing that one day, in the future, after the studio is done making nine other movies, Black Widow will get her own film, as Marvel Studios president Kevin Feige has done time and time again, but by actually pulling out a contract, signing it, and just, well, doing it. Black Widow has a story to tell, and Johansson should get a chance to tell it on the big screen sooner rather than later. I'd definitely pay to see that — and judging by the numbers, I'm not the only one.