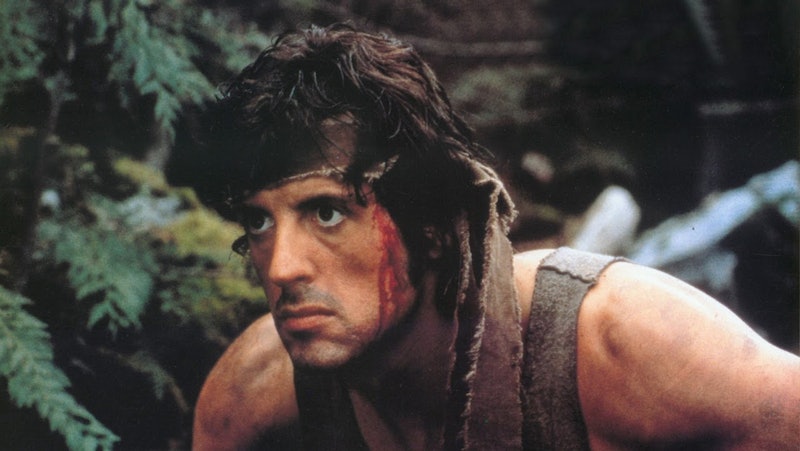 In my family, the Fourth of July is a thing. Picture it: eastern Iowa, 1999. My late grandfather, a Marine Corps vet who served in Korea and spent the rest of his career working overseas for the government, steps out of our family's farmhouse and sips on his coffee as he puts on the Boston Pops. My sister, brother, two cousins, and I roll into the kitchen and sit at the kitchen table as our grandmother slings a loaf of Wonderbread toast slathered in butter at us. Our greedy, greasy fingers reach for sparklers later in the day, as great aunts, second-cousins, and their casseroles show up in red, white, and blue. I stay up past my bedtime and curl against Grandma when the noise of the fireworks begins to scare me. Long story short: I come from an incredibly patriotic family, which is why watching First Blood on the Fourth of July might seem like a strange way to mark the occasion.

Yet for me, it's a movie that sums up the holiday in a truly perfect way. The first film of the Rambo series bottles up a lot of my grown-up feelings about the United States and expresses the betrayal, confusion, and devotion that come with my experiences as a queer woman trying to negotiate citizenship with civil disobedience. While I believe in many of the U.S.'s ideals — freedom of expression, the separation of church and state — I also know these principles were authored on the backs of slaves and still come at the cost of people of color around the world. This kind of tension rests at the heart of First Blood , so it's a movie I'm sure I'll be screening it during my Fourth of July weekend.

I'm not saying it's a flawless movie, or that the cast is without its faults — believe me, I don't think Sylvester Stallone has made major contributions to the lives of women — but I do think it's a great choice for Independence Day weekend. Based on the 1972 novel by David Morrell, First Blood tells the story of a Vietnam vet and hitchhiker who winds up encountering a slew of violence after landing up in his old war buddy's small Washington town, Hope. The hero discovers his friend died from Agent Orange poisoning encountered during combat, and he spirals into grief. Hope's cops take notice of him and book him for vagrancy, and then torture Rambo, sending him into an episode of PTSD. Rambo manages to escape and has to fight for his life as the government turns against him.

Sure, it's loaded with big, dumb explosions and gets tossed around as a macho punchline, but First Blood also the highlights the false spectacle of "supporting the troops," the nature of state-sanctioned violence, and how necessary it is to care for the mental health of men and boys. First Blood is an action movie, but it also says a lot about American masculinity during and after the Vietnam War. Rambo's identity is both created and targeted by the government, which is true for many U.S. citizens and results in phenomena like the New Jim Crow. If you're like me and feel torn about celebrating the Fourth of July, considering checking this film out. First Blood shows that loving your country means taking a stand against its legalized injustices, my kind of patriotism.