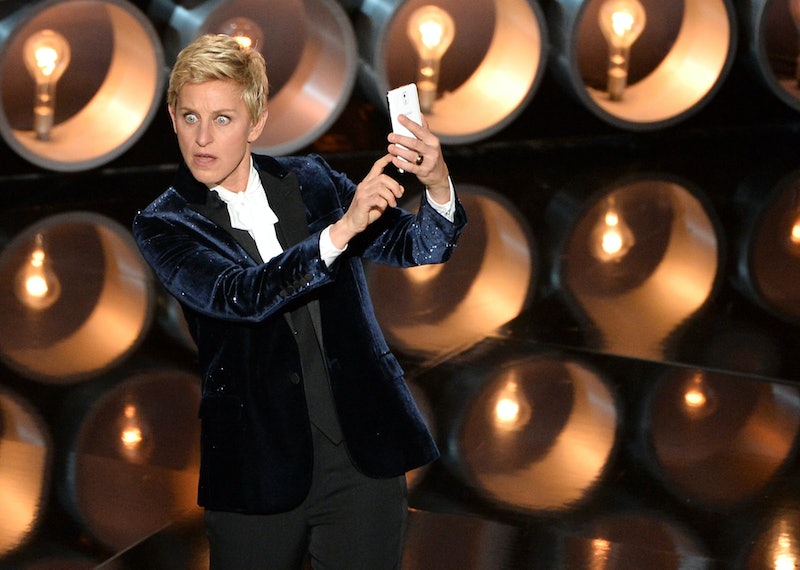 And just like that, a title once held by Barack Obama has been pried from his arms and thrust into the waiting and willing hands of Ellen Degeneres. In a moment of culturally trendy, Internet-based insanity, Ellen's epic Oscar selfie has taken the title of Most Retweeted Tweet in History from the POTUS, and in mere minutes, to boot! Just in case you were wondering what the priorities of the modern age are in 2014.

Uh huh. Where there was once a historical moment: an embrace between the first lady and President following his reelection — a source of pride not only for America but the world — now lies a bunch of famous faces in fancy clothes wearing fancy baubles surrounded by equally-as-fancy people and things, extravagantly celebrating each other with a masturbatory flair because history schmistory: Jennifer Lawrence is sitting on Queen Meryl's lap!

In an astoundingly quick 30 minutes Ellen's tweet broke the entire Internet (several times over), brought Twitter to its knees, and became the most popular tweet in the history of time, pulling in over 780,000 retweets, besting Mr. Obama. And it hasn't shown signs of stopping — even with several prominent tweeters rallying to bring the President his Twitter glory back. Lo, it seems as though it won't be a logical accomplishment, as Degeneres' tweet has already garnered 1.3 million retweets and counting. Sorry, Mr. President, but celebrity always wins.