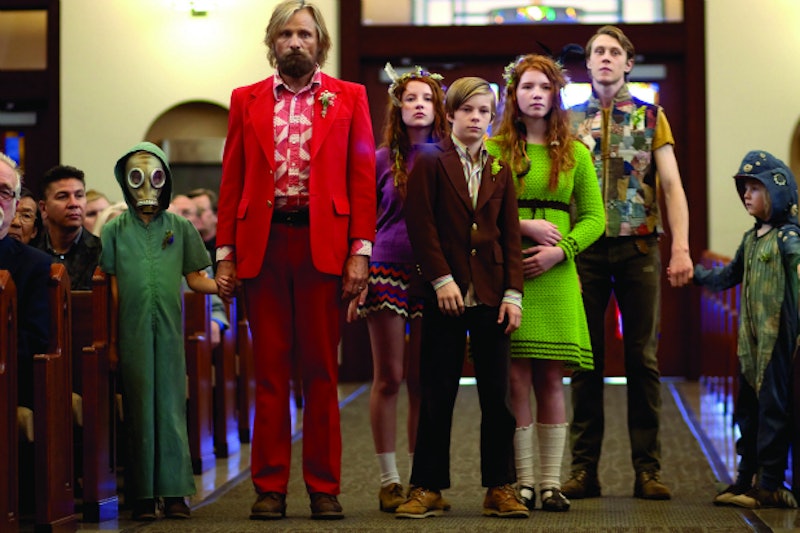 The new film Captain Fantastic may sound like it's the next big budget superhero blockbuster, but it is in fact something wildly different and unique. The comedy/drama is about a man who raises his six children deep in the woods of Washington in their own small utopian society, until he is forced to take them into the real world for the first time, where they face endless challenges and questions. The film, while fantastic like the title suggests, seems totally plausible, which is why many fans are wondering if Captain Fantastic is based on a true story. So is it?

Despite its seemingly realistic storyline, Captain Fantastic is totally made up. Not only that, but it doesn't appear that the film traces even its loose inspiration to any specific real life event. Instead, the idea for the movie comes wholly from writer/director Matt Ross, who came up with the idea after becoming a father himself and having the desire to raise his children in a perfect world; having complete control over their upbringing. The movie explores not only that philosophy, but also the downside of the idealism that occurs when the children inevitably encounter the real world and begin to think for themselves. Here's what Ross told Eugénie Malinjod of the Festival de Cannes:

"The genesis of Captain Fantastic was my having two children, making this the most personal story I’ve ever written. In this respect, the main character is my fantasy of myself and the film is aspirational. Every parent wants their child to have a happy, fulfilling life and wants to prepare their child for the challenges of life. Captain Fantastic is a dramatic, and sometimes comedic, exploration of this idea ... I want nothing more than to teach my kids everything I’ve learned about life, to help them navigate the world, to protect them. But to do this in the way the main character does it, to actually retreat from society and devote every waking moment to being a parent — perhaps there are costs there as well. On some level, the film asks a very simple question, as a parent, where does one draw the line between doing too much and doing too little?"

So Ross came up with the idea based on his own question when it comes to trying to raise his own children. But as for the hippie-like father of the film and the wilderness setting, Ross drew from his own experiences growing up, since he was raised in part on various anti-establishment communes. The director told Terry Gross on NPR's Fresh Air:

"My mother started or was part of starting various alternative living communities ... it's very important to me to make clear that they weren't hippie communes ... these people were clearly not hippies ... They tended to be artisans or artists or simply people who did not want to live in a urban environment. And some of them had families. Some of them were just by themselves or with a partner. Some of the homes had electricity and plumbing, some did not ... At one point, we lived something like eight miles from a cement road and 35 or 40 minutes away from the general store, which was literally called the general store, and about an hour and change from a town of a thousand people. So we were very, very far in the forest ... And we also lived in a teepee. You know, at one point in the summer, we'd live in a teepee and go swimming in the pond."

Ross's own experiences both growing up and as a parent helped contribute to the unique story of Captain Fantastic, so even though the film isn't factual, in a way, it will always be true to him.