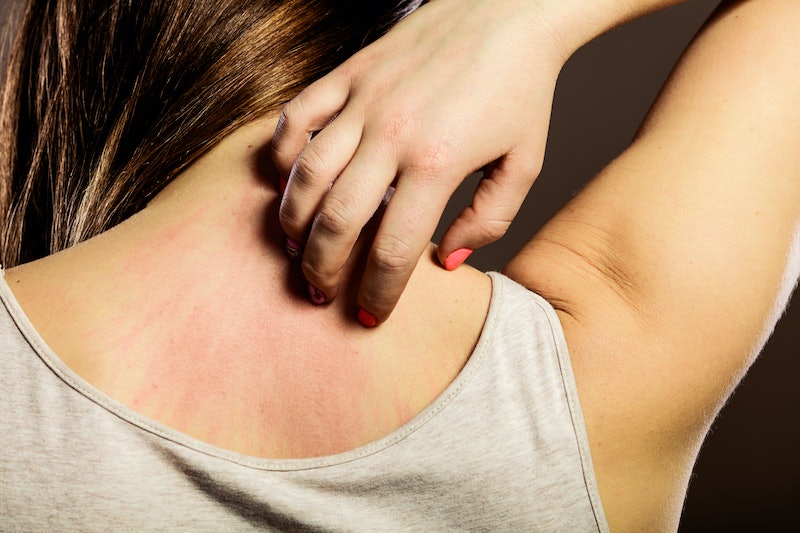 No matter where I am and how much repellent I have slathered on my body, I'm always the person who gets eaten alive by mosquitoes, even if everyone else around me manages to escape unscathed. It's been that way for as long as I can remember, and it's never gotten easier. Infuriatingly enough, my partner is one of those people who never gets bitten — ever. My mother, on the other hand, is exactly the same as me. Mosquitoes always seem to find us, regardless of the barriers we place around us. We leave barbecues and weddings with various body parts covered in bright red welts — our legs, hands, and sometimes even our foreheads. (It doesn't make for great pictures.) This made me think that maybe there is something in our genes or blood type that makes us more susceptible to contracting mosquito bites.

It didn't take much digging around to find out that this wasn't all in my head. I learned that I'm simply one of those people who gets bitten by mosquitos way more than the average human being, and there's an explanation for why those annoying little insects crave my blood, and not my partner's.

Here are four questions about certain people getting bitten by mosquitoes, answered.

Are Some People More Prone To Getting Bit Than Others?

The quick answer is, yes. Definitely, yes — 85 percent of our likelihood to get bitten by mosquitoes is due to genetics. There isn't a huge amount of research done on this topic, but experts know enough to confidently say that some folks are naturally mosquito bait, while others simply aren't (lucky them). Jerry Butler, Ph.D. professor emeritus at the University of Florida, told WebMD, "One in 10 people are highly attractive to mosquitoes."

There are certain elements of our body composition that make us susceptible to mosquito bites. For example, people with higher concentrations of steroids or cholesterol on their skin surface have no fighting chance against mosquitoes. This doesn't necessarily mean that someone with high cholesterol is going to get bitten; rather, people who naturally metabolize and process cholesterol at fast rates are easy targets because the cholesterol gets excreted to the skin's surface much quicker.

Research has also found that people with blood type O are 83 percent more likely likely to get bombarded by mosquitoes as those with other types. Type A is the least likely and Type B folks kind of sit in the middle of the two. Pregnant women are twice as yummy to mosquitoes as non-pregnant women, according to a study done in Africa. It's believed to be because of the greater levels of carbon dioxide they emit, which is a big attractor for mosquitoes. They exhale 21 percent more than the normal person, due to the second human they're growing inside of them and all. The claim, however, that women are more likely to get bitten, is actually a myth: because of their larger body size, men, on average, are more vulnerable.

Other causes include certain bacteria and some acids, such as uric acid and lactic acid, on the skin of individuals, which are said to invite mosquitoes to do their bidding freely. That's why athletes get bitten more often, since the body gets rid of a lot of lactic acid upon vigorous exercise. Additionally, anyone who drinks alcohol is more prone to getting bitten because your body temperature automatically rises, a trait that mosquitoes go absolutely crazy for.

Are There Certain Things We Do That Attract Mosquitoes?

Pretty much all the fun things you do during the summer can attract mosquitoes. Being active outside and drinking alcohol turn us into cheap prey, as those are the things that raise our body temperature, make us work up a sweat, build up lactic acid, and cause us to release more carbon dioxide into the air. All of these things are pretty much an invitation for mosquitoes to suck your blood out.

Strangely enough, the color of the clothes we wear also has an impact. Even though mosquitoes rely on smell to find their next victim (they can smell their next snack from over 50 meters away!), they also use their sight to find you. Red makes you a prime target, as do dark colors, such as black and blue. It might be time to invest in more white summer pieces.

What Are The Dangers Of Getting Bitten So Often?

West Nile and Zika viruses are no laughing matter, and they can both be contracted by mosquito bites. West Nile is most commonly diagnosed in Africa, the Caribbean, the Middle East, and West Asia. It first appeared in the U.S. in 1999, causing 62 deaths. Since then, the Center for Disease Prevention and Control has reported that 42,000 people have been diagnosed with West Nile, and 1,800 have died from the virus. Four years ago, we saw the biggest outbreak of West Nile since the 1999 scare; 1,118 cases were reported, most of which came from Texas, Mississippi, Louisiana, South Dakota, and Oklahoma.

Although it's not at all likely that the U.S. will see a Zika outbreak anything like what we've witnessed in Latin America, experts say there is still a risk of contracting it from mosquito bites in America. The National Center for Atmospheric Research (NCAR) in Boulder, Colorado released a statement saying that the Aedes aegypti mosquito responsible for Zika outbreaks overseas "will likely be increasingly abundant across much of the southern and eastern United States as the weather warms." One of the biggest concerns of contracting the Zika virus is birth defects amongst pregnant women. Early symptoms include fever, rash, joint pain, and red eyes.

What Can We Do To Prevent Getting Bitten So Often?

The good news is that our lifestyle in the U.S. already protects us somewhat from getting bitten so often. Lawrence Gostin, the director of the World Health Organization Collaborating Center on Public Health Law & Human Rights, told CBS News, "We have more effective mosquito control, more air conditioning, more screens on windows."

However, when we're outside for extended periods of time, there are extra precautions we can take to lower our risk of contracting West Nile or Zika. For starters, get yourself to a drugstore and buy some insect repellent; it's the simplest way to ward off mosquitoes. Mark Fradin, PhD, a researcher with Chapel Hill Dermatology, led a study proving that people who used a standard strength of DEET were protected for up to five hours. "[DEET] has been in use for over 40 years and has a remarkable safety record," Dr. Fradin told WebMD. The CDC officially named DEET as a successful mosquito repellent in 2005. Another useful repellent is metofluthrin, which can be purchased as a paper strip to be placed outside during social gatherings or worn as a product.

If you don't want to use chemical-based repellents, though, there are alternatives, such as eucalyptus oil, soybean oil-based products, coconut oil, and skin patches containing thiamine, which is vitamin B1. These may need to be reapplied more often, though, to maintain their strength.

In short, there are all sorts of ways to protect yourself against getting attacked by mosquitoes if you're one of the unfortunate people who is genetically predisposed to getting bitten. All it takes is a little conscious planning ahead, which is a small price to pay for a summer free of red, itchy welts.

More like this
How To Fight For Reproductive Rights, Based On How Much Time You Have
By Courtney Young
Michigan’s Governor Is “Going To Fight Like Hell” To Protect Abortion Access
By Andrea Zelinski
6 Abortion Advocates To Follow On TikTok
By Sara Youngblood Gregory
How To Protect Your Digital Privacy If You Need An Abortion Post Roe v. Wade
By Kaitlyn Wylde
Get Even More From Bustle — Sign Up For The Newsletter