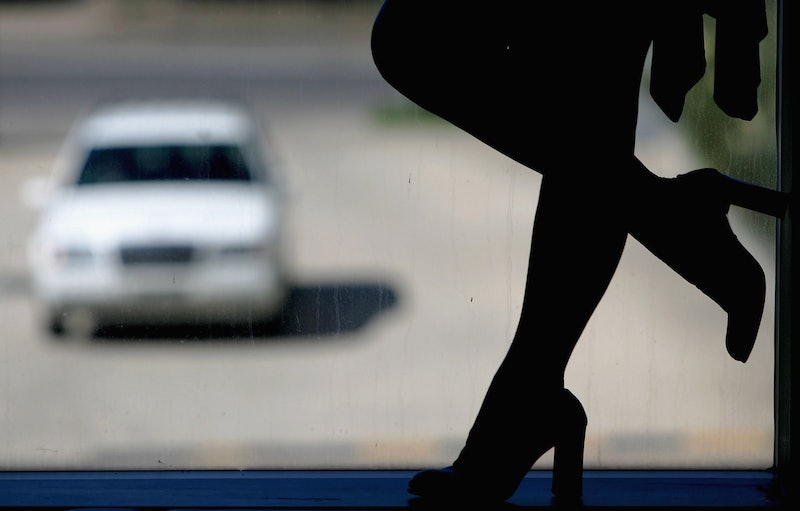 There’s a reason sex work is called sex work. Yes, there are lots of sexy things involved, but make no mistake: It’s work. Actual, legitimately hard work. And just in case you need proof, professional escort and lady of words Avery Moore broke down how she spent 2013 on the job and put it into a handy-dandy infographic. Encompassing actual time spent with clients, how many hours she spent traveling for work, and everything in between, the figures are pretty eye-opening. Let’s do a little math, shall we?

According to Moore, she spent 1,394 hours with “company” — which comes out to a little over 58 straight days. That’s right: If you didn’t sleep at all and spent all day, every day working for roughly two months, that’s how much time she spent on the job. But being an escort doesn’t begin when your client walks through the door and end when he or she leaves; there’s also all those hours spent dealing with administrative stuff (gotta keep the books organized), travel time, and time spent making yourself look the part. All that took another 1,239 hours, so all in all, Moore worked a whopping 2,633 hours in 2013, or 109 24-hour periods. Given that your average 9-to-5 results in roughly 2,080 hours if you work 40 hours a week, every week, with no time off — well, it should be pretty clear by the figures that Moore is working her arse off.

Moore writes on her blog that she created the infographic mostly for herself; she did, however, tell the Daily Dot that it was also meant to shed some light for the public on what her job is really like. “I thought it would be enlightening for other people. Everyone’s always so curious about what an escort’s life is ‘really like’ and there are so many incorrect assumptions,” she says. She also notes, though, that she realizes how lucky she is that she has a job she loves: “I can’t speak for anyone but me, but my days often involve a lot of planes, trains, and automobiles, and fantastic getaways with wonderful people. I’ve been given such a fun life, I get pleasure out of giving others a glimpse into it.”

I know that I would probably be a terrible escort myself; this is mostly because I am a horrible misanthrope and I hate people. But I have the utmost respect for other people who are escorts. Not only do you have to be a one-woman theatrical event, but you also have to be a shrewd businesswoman on top of it. Sex work isn’t all glamour, but it isn’t all sleaze, either. Also, I love that her Johns gifted her 49 books and only nine pairs of shoes. A woman after my own heart.

For the curious, here’s the full infographic; you can embiggen it over at Moore's blog.

Images: Avery Moore/From Me to You

More like this
Why You're Seeing Green Bandanas At Abortion Rights Protests
By Lexi Inks
34 Quotes That'll Inspire You On Juneteenth & Beyond
By Syeda Khaula Saad and Siena Gagliano
How To Come Out Online, According To Trevi Moran
By Melanie Mignucci
How Getting An Abortion Has Changed From The ’60s Through Today
By Amanda Chatel
Get Even More From Bustle — Sign Up For The Newsletter