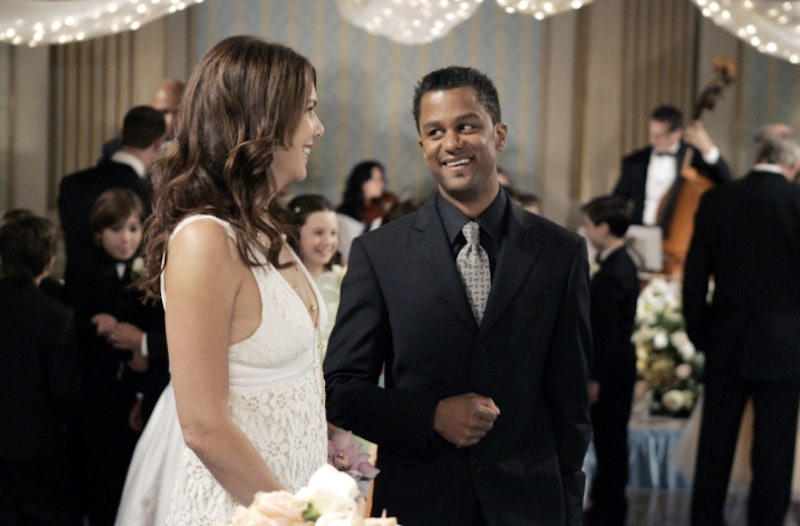 Michel Gerard, master of exquisite tailoring, passive-aggressive customer service and mean one-liners ("People are particularly stupid today; I cannot talk to anymore of them"), is a fantastic concierge at the Independence Inn and later, The Dragonfly Inn. But how much do we know about Michel, beyond the realm of the inn? So I'm excited to announce that Gilmore Girls' Michel's personal life will be a little less opaque from the revival onwards. According to Yanic Truesdale (Michel) in a new interview with Us Weekly, all this is set to change: “We kind of haven’t seen Michel outside of work, really. I think very rarely he was outside of the inn. And we didn’t know much about his personal life. So this time is different. We know much more.”

And to that I say, finally. And Truesdale seems to be thrilled as well. He continued, in his Us Weekly interview:

“That is nice for me as an actor because it gives me a backstory, but it gives me meat for the character because he, you know, I definitely have an arc and stuff going on in my personal life that affect the character. So the fans can expect to discover more about Michel.”

It really is about time. I feel like we've been waiting a painfully long time to learn anything about Michel's personal life, which is strange, because in lots of ways he's a key character: he's who Lorelai spends her daily 9-to-5 with (and OK, we're talking the hotel industry, so probably more like 7-to-9); he knows her family; he's intimately acquainted with her love life. Which begs the question, why do we know so little about him?

The answer might lie in what was never spoken about Michel. I felt that there were moments in the series which obliquely hinted that Michel was gay. Obviously it was all very ambiguous, something showrunner Amy Sherman-Palladino told the Huffington Post was done on purpose: “We all know men who seem creative, who have wives and children, so we never actually pursue it one way or the other and sort of let it lie.” When the Huffington Post asked Truesdale about this, he responded “We left it ambiguous and I think that was a choice. I actually never asked Amy! ... I’ve never asked, swear on my mother’s head.” Honestly? While I think it's cool that they left it ambiguous, in 2016 with LGBT rights being so high profile, if Michel is meant to be gay then, please, for the love of all that's liberal, let this character out of the closet. It's dark in there and there are mothballs. Let Michel go to yet another Celine Dion concert with an actual date instead of Lorelai.

But it's not just about sexuality. Michel is one of the most prickly, nuanced characters on the show, alongside Emily Gilmore. Much of his hostility seems to derive from his slavish devotion to Lorelai. Is he so clingy simply because he's lonely? This is a question the first seven seasons of the show left unanswered and I'd be as excited to meet Michel's group of friends as well as his lover(s).

Whatever happens, kudos to Sherman-Palladino and the rest of the Gilmore Girls scriptwriters for picking up on the audience affection for a mostly overlooked character. In a world of Rorys and Lorelais, sunshine and rainbows, sometimes a little concierge sass is just what the doctor ordered.

More like this
20 Celebrity Couples Who You Forgot Dated In 2002
By Jake Viswanath
Everything To Remember From 'Stranger Things 3' Before Watching The New Season
By Gretchen Smail
What Makes A Sally Rooney Sex Scene So Hot?
By Samantha Leach
The New Monster In 'Stranger Things 4' Might Be The Creepiest One Yet
By Gretchen Smail
Get Even More From Bustle — Sign Up For The Newsletter