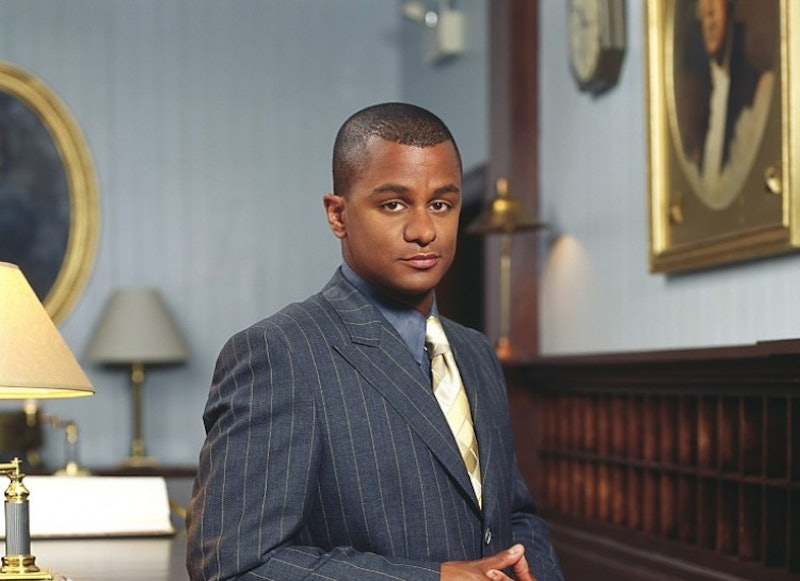 The unrelentingly sarcastic Michel was, without a doubt, one of Gilmore Girls' best characters. Throughout all seven seasons of the show, Michel (portrayed brilliantly by Yanic Truesdale) worked right alongside Lorelai and Sookie at both the Independence Inn and the Dragonfly Inn. While it was always clear there was a soft center lurking beneath Michel's snarky façade, he hid it very well thanks to his iconic, sarcastic one-liners — and, as a fan, I can honestly say it just made me love him more. (In fact, I am going to go way out on a limb here and say Michel is Gilmore Girls' most quotable character. I mean, what Gilmore Girl fan hasn't broken out, "People are particularly stupid today; I cannot talk to anymore of them" at least once?) If you already miss him as much as I do, be warned: You're about to miss him a whole lot more. For a Q&A about Michel and the series with fans, Truesdale took over the official Gilmore Girls Facebook page — and, of course, the results were all kinds of wonderful.

It turns out Truesdale not only has fond memories of his time on Gilmore Girls, but he also has a bit of Michel in him as well. During the Q&A, Truesdale revealed some amazing anecdotes about his time on the show, his favorite moments, and all the ways he and Michel are pretty much the same person (although it is clear Truesdale wears his softie center on the outside). Here are the seven best quotes from the Q&A that every Gilmore Girls fan should read over right now — and trust me, you should prepare to feel some serious Michel nostalgia because Truesdale's candor serves as a reminder that Michel was always the best.

During the Q&A, one intrepid fan asked Truesdale what his favorite Michel lines were. For may actors, I suspect this would not have been an easy question to answer, but Truesdale shared several favorites seemingly without having to think about the question too much. Could this mean Truesdale drops classic Michel comebacks in real life every now and then? I like to think so.

"People are particularly stupid today. I can't talk to any more of them." When the woman asks about the best antiques and I answer, "At your house, I guess." Also, "To me you are the teacher in the Charlie Brown cartoon." Also, "No I'm sorry I'm just a simple boy from Texas."

2. On What He Loved Most About Michel

Everyone cracked jokes in the world of Gilmore Girls, but very few characters shared Michel's love of pure, unadulterated sarcasm (except maybe Emily, who is arguably the only person Michel didn't pretend to hate). Michel added a bitter counterpart to the otherwise sweet humor that filled the show, and he made the other characters raise their banter game. Truesdale loved everything about his character's darker outlook on life — and, when asked what his favorite part of playing Michel was, Truesdale responded:

His sarcasm and cynicism! And his way of saying out loud what often we think but we don't allow ourselves to say. It's kind of a guilty pleasure to be able to speak your mind, it was nice to do that.

3. The Character Truesdale Loved Most Who Wasn't Michel

Truesdale response to which character he loved the most besides Michel is very likely the same person Michel himself would have picked (although he would have loathed admitting it). Because of the many layers of the character Lauren Graham effortlessly juggled, Truesdale revealed he had great respect and love for Lorelai. Throughout the series, Michel always gave Lorelai a hard time, but you have to look no further than the Season 4 episode "The Nanny and the Professor" to see how much Michel valued Lorelai's opinion.

I think I would have to say Lauren's character because she had a lot of layers. She was struggling, she was touching, she was funny, she was fierce, she was weak, she was strong. It felt like she was a very rich character.

4. The Scene Truesdale Would Film Again In A Heartbeat

Truesdale's most memorable episode to film was Season 4's "Last Week's Fights, This Week's Tights" because of a certain four-legged equine guest star.

I had a lot of fun because Michel is talking to Lorelai with Sookie. We're talking as if it's not an issue that there's a horse in the living room. In complete denial of the horse being there. I remember having a lot of fun with that.

5. How Truesdale Feels About Celine Dion...

Michel was obsessed with Celine Dion, and his love for the Titanic songstress led to its share of jokes. It was such a key component of Michel's character that it almost seems like the inspiration came from Truesdale himself. Sadly, the actor revealed he only normal loves Dion.

6. Why He Never Had Trouble Keeping A Straight Face

If you've ever wondered whether or not Truesdale cracked up when he was playing opposite Graham or McCarthy, here's your answer: Turns out, those two hilarious ladies could not break Michel or Truesdale. Michel's dry sense of humor was all part of Truesdale's true personality.

That's my sense of humor anyway! To have a poker face! I'll say a joke but nothing you would see in my face you would be able to tell I just told a joke.

7. Where Would Michel Be Today?

Prepare to feel your hearts melt. When asked where Michel would be today, Truesdale gave the perfect answer.

I would watch that show in a heartbeat! Who's with me?

More like this
Netflix Reveals First Look At Wednesday In The 'Addams Family' Spinoff Series
By Bustle Editors
The Spice Girls Just Dropped A Brand New Music Video
By Sam Ramsden
Markella Kavenagh was working in retail before 'The Rings of Power'
By Maxine Harrison
'Grey's Anatomy's New Intern Got Advice From Dr. Bailey Herself
By Grace Wehniainen
Get Even More From Bustle — Sign Up For The Newsletter