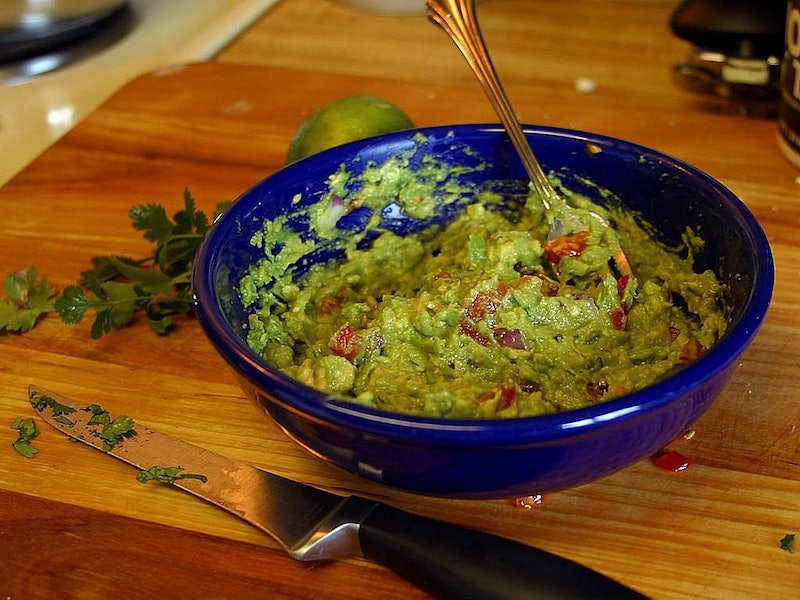 It's hard to believe it's been an entire year, but on this day in 2015, the great debate over The New York Times guacamole pea recipe began. Battle lines were drawn, and friendships were ruined in the name of a hybrid guac that dared to compromise a vat of avocado-y goodness with — gasp — green peas. FOR SHAME. And now, on the one-year anniversary of the controversial recipe's debut, Twitter reactions to pea guacamole prove that people are still feeling some kind of way about it.

Of course, I'd be remiss not to mention that not everyone thinks the recipe is sacrilege. Apparently, the past year has been one of deep reflection for some folks, and by deep reflection, I obviously mean eating pureed peas and calling it guacamole. (I don't think it's hard to tell on which side my loyalty lies.) When The New York Times made the now infamous tweet one year ago today, they linked to the recipe and a bold assertion: "Add green peas to your guacamole. Trust us." While the notion of trusting anyone who wants to put peas near my guac sounds like an unequivocally bad idea, judging by the mixed bag of tweets commemorating #GuacGate2015, some people did indeed trust them. I'm not totally sure how I feel about that myself, but, well... there it is.

But enough backstory. Let's take a look at what the good people of the interwebz have to say about pea guacamole one year later, shall we?

Understandably, Some Are Still Filled With Rage:

Some Responded Swiftly With Puns:

And Some Pushed Back Against Pea Guac With Sarcasm:

This Astute Lady Pointed Out The Fundamental Prob:

And This One Brought Up A Legitimate Curiosity:

Others Are Still Downright Incredulous:

While Some Feel Personally Victimized, Including Bustle's Own Emma Lord And Cristina Arreola:

Then There Are Those Who Managed To Make Pea Guac Political:

But Also Those Who Admit They Kinda Like It:

There's This Guy, Who Is ACCURATE:

And For The Thoughts Of Pea Guac Itself...