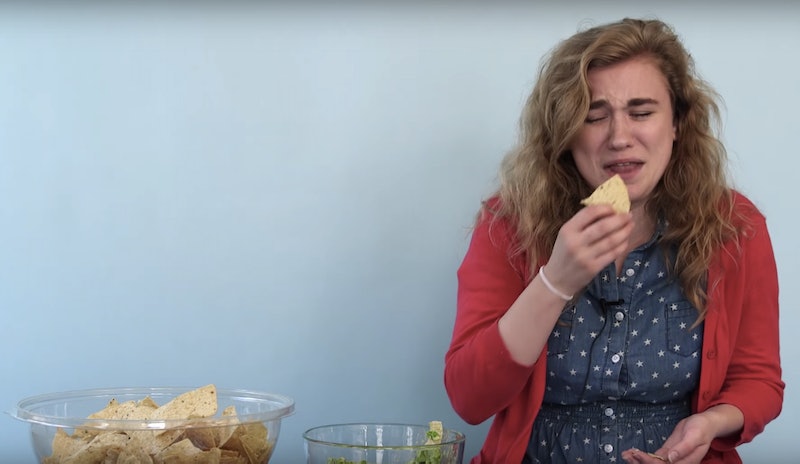 Do you remember the Year of our Lord Taylor Swift 2015? It was the best of times, it was the worst of times; and for one particular day, it was the most apocalyptic, unfathomable, terrifying of times. If you cannot recall the day that The New York Times tried to sell an unsuspecting world on a pea guacamole recipe that subsequently broke the internet, tore entire families into shreds, and just short of decimated humanity, then I don't blame you. Sometimes blacking memories out is all the human mind can do to cope.

But today marks the one-year anniversary of that harrowing day, and I am no more able to handle the burden of the memory now than I was then. The only comfort I can draw from this experience is the knowledge that I am not alone; for so many of you, fellow beings on the internet, were also affected by #GuacGate2015. You also toss and turn at night to the sound of your co-workers hoisting pitchforks and setting torches ablaze to march in the streets. You also occasionally black out in the Chipotle line, blinking at their glorious guac in fear that it has somehow been tainted by the unwelcome crunch peas while your back was turned. You also stare into the eyes of newborn babies and think to yourself, So innocent, so pure; you know not of the pea-laden world you have inherited.

For it is now that we must finally acknowledge that time may heal all wounds, but it shall never truly heal this

Trust us, they said. And so we did. Here at Bustle we kept an open mind, and like so many brave Americans that day, we tried the Guacamole Pea Recipe. It is impossible to tell just how much of a toll that this took on us — not just nutritionally, but mentally, emotionally, and spiritually. For your reference, this is what I looked like before I tried the infamous guac.

And this, my fellow Americans, is what I looked like after.

If you thought that this would be a year of recovery, a year of coming together as a nation in the wake of this travesty, then you were wrong. For it is on this day — yes, this very day, the anniversary of #GuacGate — that America now faces a massive avocado shortage, threatening the guac integrity of Fourth of July parties from sea to shining sea. There is no escape from this darkness, America; it began with the peas, and the vacuum of that evil has festered, growing more and more powerful with each passing day.

I know not what the future has in store, but this I do know: We will persevere. Have hope, my fellow countrymen. For if we can survive Guacamole Pea-mageddon, then we can survive anything.