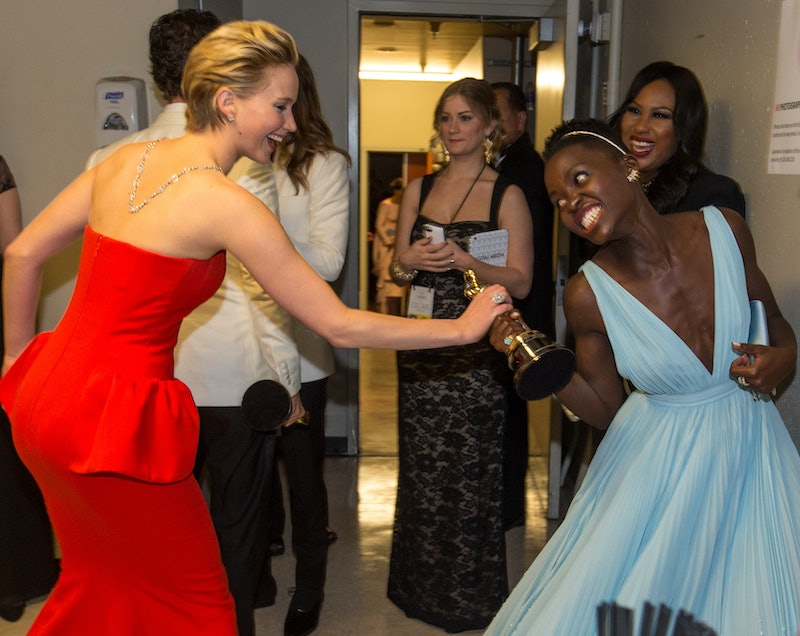 If there's any lesson that we learned from this awards season, it's that when it comes to ingenues, there can only be one. This year's Oscar race saw reigning Sweetheart Jennifer Lawrence vie for Best Supporting Actress alongside newcomer Lupita Nyong'o, and although neither actress ever gave any indication that they were competitors, the media happily pitted the two women against each other as if they were mortal enemies. On Sunday night, the "fight" seemingly came to a close when Nyongo's took home the Oscar, and when Lawrence gleefully pretended to steal the other actress' award backstage, even the most drama-hungry media finally gave it a rest.

In the photo, a laughing Lawrence is seen grabbing hold of Nyongo's Academy Award, won for the latter's powerful performance in 12 Years a Slave. Nyong'o, giving her best fight face, understandably keeps a tight hold on her Oscar, which she said onstage was an "incredible" reminder that "no matter where you're from, your dreams are valid." Yeah, we'd be holding onto that with all our might, too.

It's a fun photo, but more importantly, it shows that despite what much of the media wants us to believe, Lawrence and Nyong'o are not exactly what you'd call archenemies. Believe it or not, Lawrence seems genuinely happy for her Supporting Actress competitor. It's almost as if she was being serious when she cheered during Nyongo's name Oscar win, and that in Ellen DeGeneres' star-studded selfie, she didn't sneakily try to cut Nyong'o out of the photo. An actress actually supporting another actress, despite vying for the same prize? It's unheard of!

And it's pretty great. The reason that Lawrence and Nyong'o were pitted as competitors had less to do with the category they were competing in, and much more to do with the fact that both women are funny, smart, and routinely well-dressed. Lawrence may be more accident-prone while Nyong's is more eloquent, but both stars are young, attractive, and likable; in Hollywood terms, that basically means they're identical. And as it's no fun for the media to have two awards season darlings at once, especially women who actually get along, they make it seem like only one of them can come out ahead.

Yet this awards season, Lawrence and Nyong'o decided to have none of that. They showed off their friendship and supported each other's wins, proving that even the "fiercest" competitors can get along just fine. Nyong'o may have won the Oscar, but her friendliness with "rival" Lawrence is a win for women everywhere.

A few photos of the duo's Oscar night:

More like this
21 Photos Of Ben Affleck Holding Coffee, Cigarettes, Or J.Lo’s Hand
By Marina Watts
At 14, Tatiana Maslany Was Obsessing Over Tamagotchis & The Spice Girls
By Gabrielle Bondi
Beyoncé & Madonna’s “Break My Soul” Remix Honors A Group Of Black Icons
By Stephanie Topacio Long
Jennifer Aniston Just Brought Back A Major ‘00s Bikini Trend
By Darshita Goyal
Get Even More From Bustle — Sign Up For The Newsletter