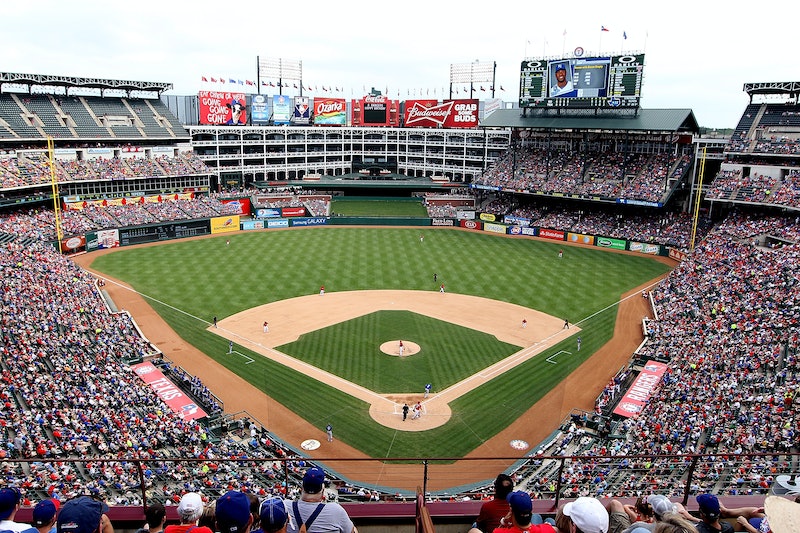 It's officially a pretty awesome day for women in sports: Two women have just joined the Sonoma Stompers baseball team, making it only the third time a professional baseball team has had women on the roster since the 1950s. So does this maybe signal the beginning of a shift in baseball as a whole? That remains to be seen, but in the meantime, it's still really cool.

The Sonoma Stompers, an independent team, announced this week that the team is signing two women, 17-year-old outfielder and pitcher Kelsie Whitmore from California and 25-year-old pitcher and infielder Stacy Piagno from Florida. Both women will make their minor league debut Friday, July 1 and are scheduled to be part of the starting lineup. Whitmore will be playing left field and Piagno will be pitching.

And it seems that adding women is something that Stompers team owner Francis Ford Coppola made a priority for the team. "My family would play co-ed baseball games and inevitably the star player would always be an aunt who could run and hit and that made the games so much more fun,” Coppola said in a press release. “When watching Major League Baseball, I always wondered why there couldn’t be a co-ed team. It’s the one major sport in which weight and strength come less into play."

Coppola is not the first person to note that baseball has the potential to be a co-ed game. Although Major League Baseball does have a rule against women playing, the game itself doesn't put women at much of a physical disadvantage. It's not a sport where extra height or weight are major advantages, like they are in basketball or baseball. In fact, it's entirely plausible that there are plenty of female athletes who are able to measure up to the level of conditioning required of professional baseball players.

So far, no woman has ever played in the major leagues, though one woman, the French player Melissa Mayeux, is now in the MLB international registration list, making her eligible to be drafted by a major league team. And if more women start getting signed to minor league teams, which feed into the majors, it might only be a matter of time.

For that to happen, though, more owners and managers of minor league teams would need to start recruiting women — or at least start considering female players — in order to build up enough of a pool of female prospects that women who play for the minors are seen as contenders, not merely novelties.

The Stompers have a history of being a progressive organization; the first openly gay player in professional baseball, pitcher Sean Conroy, played for the Stompers. But for a real shift in the game as a whole, more teams will need to take a similar attitude.

For the Stompers, though, it seems that they at least will be taking the women they sign seriously as players.

“This isn’t a one-day event,” Sonoma General Manager Theo Fightmaster told MLB.com. “That’s been done a dozen times. Let’s give women a chance to be part of a team, let’s give women a chance to play against men. What will they learn? What have they not been coached because they haven’t had the same coaching as boys? I remember being really disappointed with my sister’s coaches because they coached the girls a lot different than how I was coached.”

It's also, the team is careful to note, not a publicity stunt. Fightmaster told MLB.com that he wasn't sure how well the women would fare when up against professional men as opposed to women and girls, and how well they do will determine how much they play. "They are not gonna be in the starting lineup every night so we can sell more tickets. It's a big game on July 1 and they'll both be in the lineup and after that we'll see what their performance dictates."

Meanwhile, Kelsie Whitmore and Stacy Piagno will be playing their first minor league game Friday, July 1 against San Rafael at the People's Home Equity Ballpark at Arnold Field in Sonoma. The game will begin at 6:00 p.m. PT and will be broadcast live on the Bay Area Online Sports Network.

So if you want to watch history being made, tune in!

More like this
How To Fight For Reproductive Rights, Based On How Much Time You Have
By Courtney Young
Sandra Bullock, Girlboss Extraordinaire
By Matt Harkins & Viviana Olen
The 'Hocus Pocus' Sequel Finally Has A Release Date & It Makes Total Sense
By Shannon Barbour and Radhika Menon
Starbucks' Summer Menu Includes A New Chocolate Cream Cold Brew
By Emma Garza
Get Even More From Bustle — Sign Up For The Newsletter