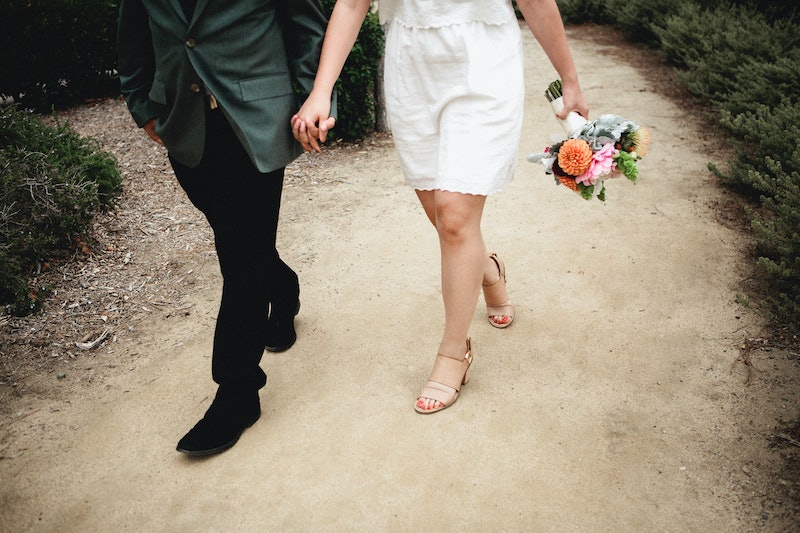 I remember distinctly the day I chose the flowers for my wedding bouquet. I was getting married on the beach and took great care selecting several flowers that would give me that airy, coastal look I loved. But, prior to the big day, I'd never really stopped to think about why brides carry bouquets at weddings. I suppose I always assumed it was purely aesthetic but, hey-oh, turns out I was totally wrong. While the history of bridal bouquets isn't crystal clear, the reasons that do seem to be widely accepted paint a clear enough picture of the logic behind this time-honored technique.

If you've ever planned a wedding or are currently in the process of planning one, don't let the following history sully the way you feel about your floral arrangements. These days, I'm happy to report, most brides simply carry flowers because they are beautiful. And, to be honest, I feel like it prevents that awkward "what-do-I-do-with-my-hands" conundrum that typically results in a ton of fidgeting. Can you imagine walking down the aisle without a bouquet? Seriously, though ... what would you do with your hands? Regardless, it's your wedding so you'll carry a bouquet if you want to (or not). The only reason that really matters is yours.

But for the sake of the wisdom of knowing thyself, let's get to some of the weird and sometimes cringe-worthy reasons brides have carried bouquets historically. Like a lot of wedding traditions, it's... not all sunshine and roses. Literally.

Here's the ugly truth, people — back in the 15th century, brides had a very distinctive odor. As in, they smelled. According to Huffington Post, June was the most popular time of year for weddings because people took their annual baths in May. They only got one, you guys (and you thought your struggles were real), and women were the last to take a dip. A household would fill a big tub full of hot water and, in this order: The man of the house would take a nice, hot bath; followed by any male members of the household; followed by the poor and lowly women residing there; and, lastly, the baby got the stagnant surplus. As you may have guessed, this is the where the expression "Don't throw the baby out with the bath water" originated.

So the theory behind June weddings was that people would still smell relatively well only a month later, presumably especially the menfolk who got the hot, clean portion of the bathwater. As an extra precaution against any potential stink they may be sportin', brides began carrying fragrant bouquets to mask their pungent body odor. Swoon?

Another popular custom that dates way back in the world of bridal bouquets is carrying them to ward off evil spirits. In this scenarios, the bouquets were odoriferous not due to strong-smelling florals but, rather, because they were created using highly pungent herbs — think spices, dill, and quite possibly lots o' garlic and chives. If now you can't help picturing a baked potato walking down the aisle, you aren't alone. But, I digress.

The theory here is two-fold. On the one hand, traditional folklore suggested the strong smells would drive away evil spirits and bad luck. On the other hand, it's possible the practice either emerged or evolved during the times of the Plague — during that time, people commonly clutched herbs over their noses and mouths in attempt to survive, as garlic and dill both have natural medicinal properties.

3. To Make The Happy Couple Frisky

Well, now we're talking! During Roman times, bridal bouquets weren't bouquets at all. Instead, they were floral garlands which signified new life and fertility. As the wedding tradition evolved over time back toward a bouquet, edible aphrodisiacs like dill (pulling double-duty) and marigold were added to incite lust.

4. To Send A Sweet Message

This Victorian-born reason for the bridal bouquet is probably closest to our modern logic behind carrying flowers when we get hitched: Because they mean something special. During Victorian times, in fact, they meant something particularly special — it was during this time florigraphy, or the language of flowers, came to be, whereby specific flowers took on specific, significant meanings. If a groom wanted to send his bride a sweet, coded message, he would choose a bouquet using flowers that conveyed his message of love. Similarly, brides would choose flowers to relay their feelings to their future husbands as well.

Today, this practice is still used by some brides when choosing their bouquets. Want to express adoration? Consider a white camellia. Want a happy marriage? Peony is your pick. Want to convey to your partner you are "dazzled" by their charms? You can't go wrong with the ranunculus. Yeah, this reason for bridal bouquets easily trumps the rest.

5. To Protect the Bride

In ancient times, a bride was considered lucky. And since she was apparently so fortuitous, a habit emerged by which wedding-goers would literally swarm her and try to tear bits of her dress off her body in the hopes some of her good fortune would transfer. Yikes, right? Clearly, this was none too fun for the brides and likely led to many unintended injuries. Thus, according to some theories, the carrying (and subsequent throwing) of bridal bouquets and wearing of garters was born out of a desire to protect the bride.