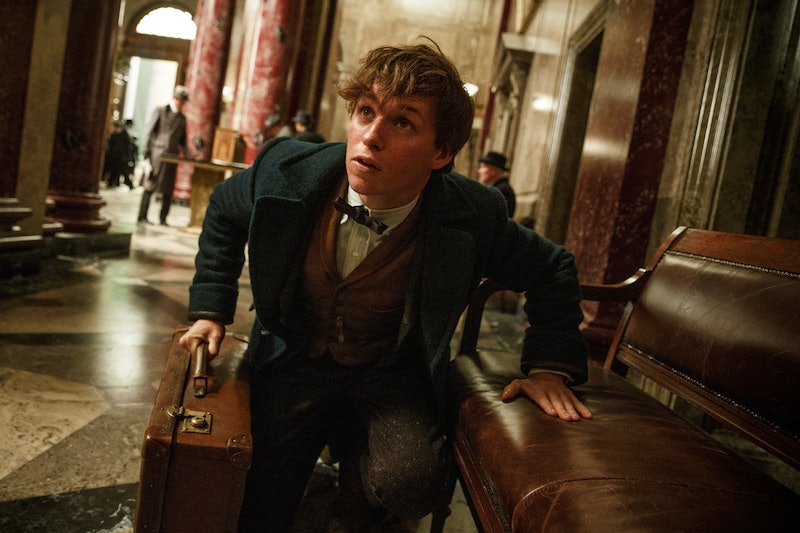 The world of Harry Potter just keeps on expanding, and fans could not be happier. Well, maybe they could be a little happier if they knew Fantastic Beasts and Where to Find Them could be a trilogy of films instead of a one off expansion into the wizarding world. As of right now, there are no details on deals being in place with the cast, or even hints at what the rest of the story could bring — but director David Yates revealed to Reuters on the Tarzan red carpet that J.K. Rowling has already written the Fantastic Beasts sequel and has ideas for a third film. Barring a box office disaster when Fantastic Beasts hits theaters on November 18 — and honestly, I am pretty sure Rowling has a lifetime supply of Felix Felicis to prevent things like that from happening — there are almost definitely more adventures of Newt Scamander on the way.

"We’ve done the first one, she’s written the second one, [and] she’s got ideas for the third one," Yates said on the red carpet. The director, who helmed the final four Harry Potter films, could not help but share his excitement over being able to add to the Harry Potter universe in a way that did not rely on existing source material. While the text book version of Newt's travels is available, the character's story never filled the pages of a book the way Harry's did, so Yates and Rowling have an opportunity to create a purely visual and brand new corner of the universe for fans. That is undeniably cool.

Even though there are still a few months standing between us all and Fantastic Beasts, knowing how invested both Rowling and Yates are in the series is exciting news. While nothing will ever replace Harry Potter, every moment spent in the magical world is one well spent. Fantastic Beasts is not only following a new hero, but it is set in a different time period, and shows magic from an American perspective. This is an opportunity for a whole new magic universe to be built, and I have no doubts that Fantastic Beasts will do an amazing job.

The best part is, because Newt is an adventurer by nature, his work could take him anywhere — so a second and potential third movie could carry Newt to all sorts of far flung locales. The potential to show a wide range of magical creatures is even more enticing. This series may not have the world-saving hook of a battle with Voldemort, but it has an Indiana Jones meets Harry Potter concept that is built to endure.

Knowing Rowling still has stories she wants to tell in the wizarding world is the stuff every Harry Potter fan's dreams are made of. When you head out to the theater to see Fantastic Beasts in November take comfort in knowing Newt's journey is just beginning.

More like this
At 14, Jenny Han Wrote Rom-Coms About Her Friends & Fan Mail To Leo DiCaprio
By Alyssa Lapid
Sparks Fly Fast & Furious In 'Honey & Spice'
By Bolu Babalola
10 Must-Read New Books Out This Week
By K.W. Colyard
Ottessa Moshfegh Is Happy To Be Your “It” Girl
By Arya Roshanian
Get Even More From Bustle — Sign Up For The Newsletter