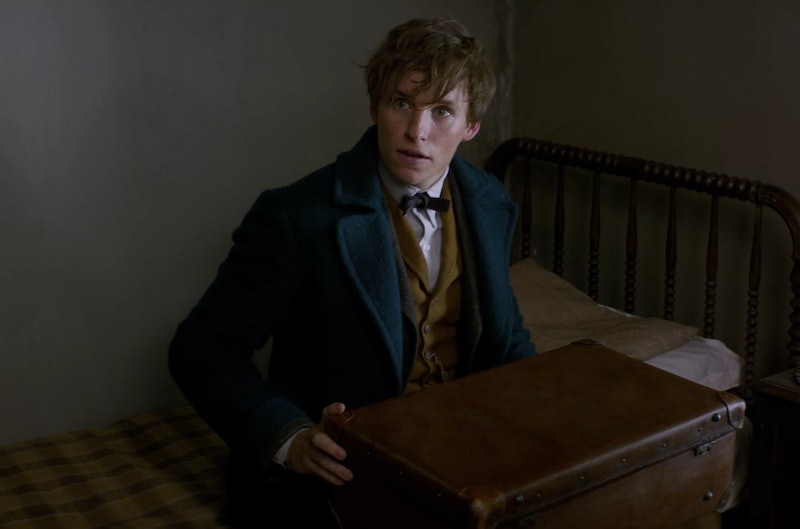 When it was announced that JK Rowling would be writing a new Harry Potter movie, fans immediately began speculating about possible cameos. It didn't matter that Fantastic Beasts and Where To Find Them is a prequel to the Harry Potter series that would take place long before Harry, Ron Weasley, Hermione Granger and even Tom Riddle were born — people still freaked out about the possibilities. The film takes place in 1926 New York, where Newt Scamander (Eddie Redmayne), a British wizard specializing in the study of magical creatures, accidentally lets loose a few magic beasts, and needless to say Fantastic Beasts takes place way outside the borders of Hogwarts School of Witchcraft and Wizardry. Still, that doesn't mean fans won't get some hints of beloved Potter characters in the film. Here are seven cameos to expect in Fantastic Beasts — within reason.

But remember: it's extremely unlikely we'll get to see any of our young heroes in cameo roles in Fantastic Beasts and Where to Find Them . For a character like Harry Potter to appear in the movie, it would have to be in some kind of strange flash-forward sequence. And, while I am dying to see Daniel Radcliffe put on those horn-rimmed glasses once again, I think that's probably for the best. Still, that doesn't mean we won't potentially see a Potter ancestor appear, or any of the characters below.

Nicolas Flamel is immortal, essentially, or was for quite some time thanks to the Sorcerer's Stone. It's entirely plausible that he traveled to America at some point in his 600-odd years. Even if we don't actually get to see him onscreen, Flamel was famous, so it would make sense for him to get a shoutout of some sort.

An old friend of Dumbledore's, Elphias Doge was supposed to travel the world with his friend after graduation, but ended up going by himself after Dumbledore's mother died. On his journey, Elphias met a Chimaera, a deadly creature described by Scamander in Fantastic Beasts. Perhaps they met in New York.

Like Voldemort, it seems like Grindelwald mainly kept his reign of terror within European borders. However, it's entirely possible that his influence and followers lived all over the world. Given that American wizards live completely segregated lives from the non-wizards (aka the No-Maj), it's likely that American wizards don't think kindly of non-magical people. So, if Grindelwald doesn't have a cameo, maybe some of his followers will.

Tough I doubt any member of the Pure-Blood Malfoy family would choose to live underground in America, the idea of a completely segregated wizarding community sounds like it would be heaven for such magical purists. A distant Malfoy relative would not be out of place in Fantastic Beasts.

JK Rowling has already revealed that there are four main wandmakers in the U.S., but that doesn't mean that Ollivander doesn't have some kind of presence there.

OK, this one is just a great wish on my part. I want to see Dobby onscreen again, and what better time to do it than in Fantastic Beasts? House elves and how they age are a complete mystery, though based on Kreacher it seems like they do, in fact, age, so, I'm not quite sure how plausible it would be for Dobby to be alive in 1926. That said, I don't really care if it isn't canon. I just really love me some Dobby.

Any number of characters from the Harry Potter world could turn up in Fantastic Beasts and Where To Find Them. Who knows? Maybe the entire thing will end up being a history lesson given to Hermione, Harry and Ron by Professor Binns or Hagrid. The possibilities are endless...