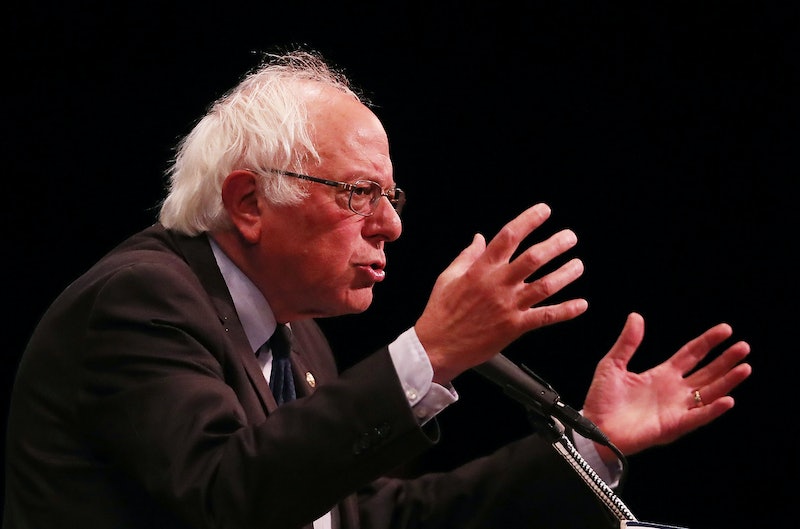 As with so many things, Donald Trump speaks the truth! At a rally in Maine, all-knowing Trump proclaimed that Bernie Sanders "hates" Hillary Clinton, adding "I mean, he cannot stand her." Sure, the Vermont senator claimed he didn't "hate" Clinton on MSNBC's All In With Chris Hayes on Thursday. However, those of us who pay any attention at all know that Sanders hates Clinton more than anything.

It’s such a shame that a petty squabble would cause that third member of Simon and Garfunkel to sabotage any chance at a Democrat winning the White House. He's been after Clinton from the beginning, ever since he had the gall to decide to run against her, knowing full well that being president was her greatest dream. Why else would he kept bringing up poll results showing that he would beat Trump by a greater margin than Hillary in the general election, like that would even be good for Democrats? He would really do anything to cover up the fact that he’s running against Hillary because he just hates her.

Case and point — even after Clinton has won all of the delegates she needs to secure her position of Democratic nominee, Sanders continues to leech the life out of her by refusing to drop out. His justification? To carry, selfishly, his “political revolution” to the convention, and try to “influence the platform” with his laughable socialist ideas. Right, like it’s at all possible that Grandpa Bernie could ever get Clinton to move toward more progressive positions on things like minimum wage, or the Trans-Pacific Partnership.

And enough with this talk of a “movement.” The only people who actually support Bernie’s ideas are actual infants (aged 18-30) who probably don’t even have the opposable thumb skills necessary to vote — they’re so awash with his promises to make college free, and hold crony capitalists and the Washington elite accountable, that they’re willing to support his mindless quest to take down Hillary just because he hates her. Who does Bernie think he’s fooling with his war chest of only $27? Why can’t he just go back to his hemp hut in Vermont, read his AARP magazine, and go out and vote for a Clinton when the time comes like a nice old man?

If it’s still not clear how insanely Sanders hates Clinton, check out his response to whether he will vote for her over Trump in the fall. He says “yes,” but with an insidious inflection that implies, “I’ll be sporting a 'Make America Great Again' hat."