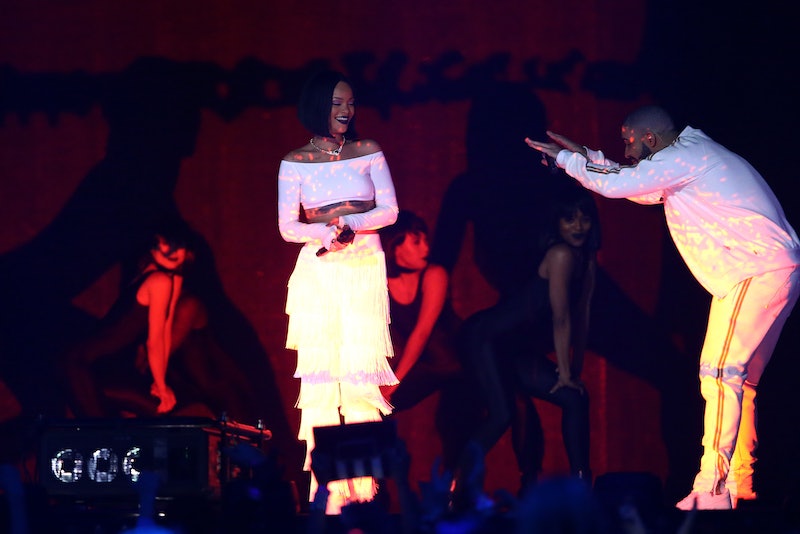 This just in: Love is real. It's so real, in fact, that it cannot be contained in such a simple word as "love," but rather, a phrase. Perhaps the phrase, "Drake never stopped loving Rihanna and they are dating again" is the right one? Yeah, you read that correctly — and no, this is not a drill. According to E! News, rumor has it that hip-hop's low-key perfect king and queen might be back together. Like, Drake might really be dating Rihanna again. That sound you hear right now? It's the heavens parting and every heavenly chorus singing.

How did this happen? Why weren't we warned? When did Drake and Rihanna plan on making the official announcement? To be fair, the signs of their rekindled love have been there all along, but lately, we've been distracted ogling newer couples to take notice. This, it seems, is karma at its finest.

The pair have been musically inseparable nearly the whole of 2016. "Work," Rihanna's perfect fusion of dance-hall rhythms and electronic beats, featured a verse by Drake and not one but two music videos where the pair got to exchange a little body heat on camera. *Fans self.* Then, Drake dropped Views, and with it, the track "Too Good," which is a beautiful duet with Rihanna. This isn't the first time they've collaborated; instead, these recent examples proves that they sounds great together and should really be delivering duets to us daily.

And it would appear that those good vibes have at least reignited rumors about their simmering romance. Drake and Rihanna have been rumored on and off since 2009, when murmurs of their hookups started spreading like wildfire. While their history has been an intricate one, it's pretty evident that the two really care for each other. In addition to frequently collaborating on each other's respective musical projects, the two often spend time with each other. Naturally, this would lead anyone to fall in love all over again with their ex — so I totally believe they could be an item again. In fact, according to an "insider" quoted by E! News, "[Drake] still loves [Rihanna] and never stopped. Rihanna is the one that's been not wanting to settle down in the past. ... They are having fun spending time with each other. Their music together got them close again."

It would seem this may now be the case, as the two have been spotted together during the European leg of Rihanna's ANTI tour. Recently, they were spotted leaving a London nightclub in the wee hours of the morning, and a few days later, Drake posted this Insta in support of her:

If you 'ship these two as much as I do, then you'll agree that this romance should be one that sticks. I've long contended that they're the perfect balance of chill and energetic/happy and melancholy, and an all-around great mix of artistic personalities. Drake and Rihanna are relationship goals. Here's to hoping that we get more cute Instagrams and even better music from this perfect duo.