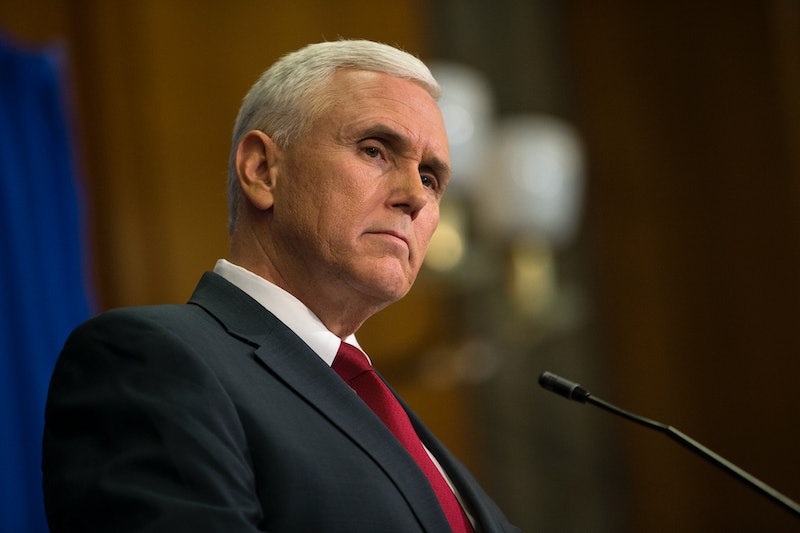 It seems that Donald Trump’s quest for a running mate has led him to Indiana, with the Trump campaign reportedly vetting Gov. Mike Pence for the vice presidential slot. The governor’s team has confirmed that the two men will be meeting this weekend, and according to NBC’s Chuck Todd, Pence has been “very high on Trump’s list for a long time.” As a Trump vice presidential pick, Pence makes a degree of sense — but only a degree.

The argument for Pence, who’s currently running for reelection as governor, is simple: He has both extensive government experience and rock-solid conservative bona fides. Trump has neither of those things, so nabbing Pence would, at least in theory, provide some balance to the GOP ticket and help lure back skeptical Republicans who are wary of Trump’s competence and conservatism.

Pence is not without baggage, however, and two recent incidents merit a revisiting. Last year, Pence signed a “religious freedom” bill that would have potentially legalized discrimination against gay and lesbian Indianans by private businesses. Not surprisingly, there was an enormous backlash. Pence, however, defended the bill, saying it was “absolutely not” a mistake and that "we're not going to change" it.

Then, days later, they changed it. The legislature passed a revised version of the bill that specifically outlawed anti-gay discrimination, and Pence, backtracking completely, signed the changed version into law. In the end, he had effectively angered both liberals, who objected to the original bill, and a lot of conservatives, who resented him for backing down. It was a no-win. The governor was also mocked for his bumbling attempts to defend the bill, particularly in an interview with ABC's George Stephanopoulos.

A few months later, Pence became the focus of a derisive hashtag after calling for an investigation into Planned Parenthood’s activities in his state. It wasn’t long before #PenceInvestigates started trending on Twitter, and two weeks later, Pence closed the actual investigation after finding no evidence of wrongdoing.

Both episodes faded rather quickly, but the manner in which each proceeded is telling. In both cases, Pence attracted massive criticism by making high-profile decisions aimed at placating social conservatives. And in both cases, his attempt failed: The religious liberty bill was watered down, and the Planned Parenthood investigation uncovered nothing. For the governor, these were all pain, no gain situations.

Trump may want to think twice before putting Pence on the ticket. From an ideological level, he’s plenty conservative, and sure, that could conceivably help Trump with voter turnout. But Pence’s bungled attempts to actually enact conservative policies, along with his questionable rhetorical skill in live interviews, should give Trump pause. The last thing he needs in this election is a running mate who will draw even more controversy to the Republican ticket. Trump attracts more than enough controversy on his own.

More like this
Prince William Condemns “Unacceptable” Comments Made To A Black Guest At Buckingham Palace
By Shahed Ezaydi
Matt Hancock Broke a Major Rule With I’m A Celeb
By El Hunt
Mindy Kaling Explains Why 'The Office' Would Be "Inappropriate" Today
By Jake Viswanath
Dyson Is Dropping Futuristic, Air-Purifying Headphones
By Rachel Lapidos
Get Even More From Bustle — Sign Up For The Newsletter