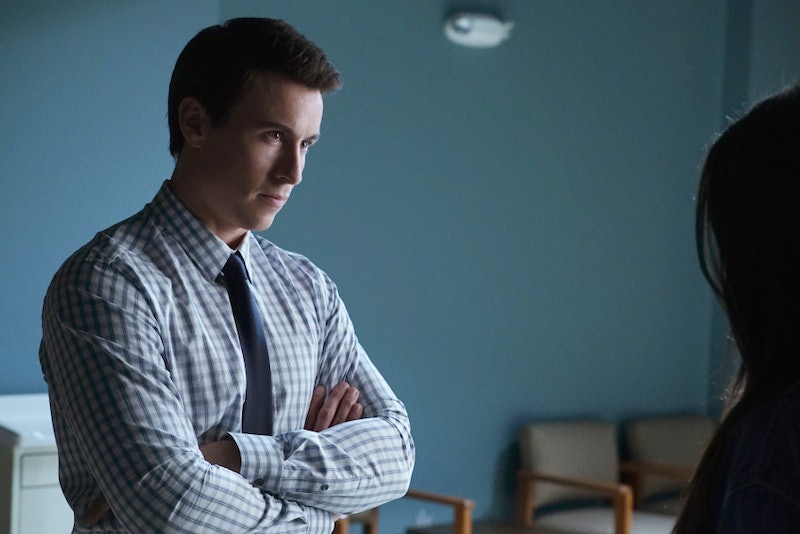 Pretty Little Liars is full of shady characters, but perhaps none are quite as secretly diabolical as Alison's new husband, Dr. Rollins. Fans were introduced to the psychologist during the Season 6B premiere, when we learned that he had been treating Charlotte for five years — and dating her sister, Alison, for at least some of that. However, that wasn't his whole story: we learned in the Season 6 finale that Dr. Rollins was secretly dating Charlotte and only married Alison in order to steal her Carissimi Group fortune. (Oh, and he's also secretly British, just to string one more lie into his web.) Now that Dr. Rollins has Alison locked in a mental facility to torture her for killing Charlotte — which she may or may not have done — it's only natural to wonder: is Dr. Rollins Uber A on Pretty Little Liars ?

Right now, it would make a ton of sense for Dr. Rollins to be the person looking to avenge Charlotte's death. After all, that's what he's currently doing with the mental hospital — he's making sure that Alison stays as miserable as possible in the facility as payback for what he believes she did to Charlotte. However, knowing what we do about Uber A, aka A.D., there are plenty of reasons why Dr. Rollins simply can't be this person.

The most obvious reason that Dr. Rollins can't be Uber A is because it's simply too easy. Dr. Rollins was revealed to be a foe of Alison and the Liars in the Season 6 finale, but PLL showrunner I. Marlene King made it clear in an interview with Variety that the Uber A storyline won't end until Season 7 does. There's simply no way that the show would make such a big deal out of Uber A, only to reveal that — surprise! — it was a guy we always knew was dangerous.

We also need to remember what we actually know about Uber A. Andrea Parker, who plays Mary Drake, told The Hollywood Reporter that Uber A goes by the name A.D. The first time we saw A.D. use this name was after they took Hanna, but we never knew for sure if they took her because he or she thought Hanna really killed Charlotte — A.D. could be playing the Liars simply to get their hands on them for some other, equally sinister reason.

It's also worth noting that at the beginning of Season 6B, the texts from A were signed with emojis — and those are the texts that would make sense to be from Dr. Rollins. After all, both Dr. Rollins and his "partner" Mary Drake don't answer to the name A.D., or even mention the initials as the name of a third partner. Is it possible that A.D.'s motives don't actually coincide with Dr. Rollins' mission to avenge Charlotte's death? I'm starting to think that he is working completely outside of A.D.'s jurisdiction, and that the two are messing with the Liars for completely different reasons.

We already know that Dr. Rollins is a bad dude, but I'm not so sure he earns the title of Uber A — it simply wouldn't be surprising enough for what could be Pretty Little Liars final season. Though it may seem like Uber A is working to avenge Charlotte, their true motivations could be the biggest OMG-reveal in PLL history — and have nothing at all to do with Dr. Rollins.

More like this
Everything To Know About A Million Little Things' Reported Final Season
By Brad Witter
Kaley Cuoco & Tom Pelphrey Just Made Their First Public Appearance As A Couple
By Hugh McIntyre
'Ghost In The Shell: SAC_2045' Was Only Supposed To Last Two Seasons
By Kadin Burnett
What’s New On Netflix: 'Stranger Things' & 'Somebody Feed Phil' Return
By Arya Roshanian
Get Even More From Bustle — Sign Up For The Newsletter