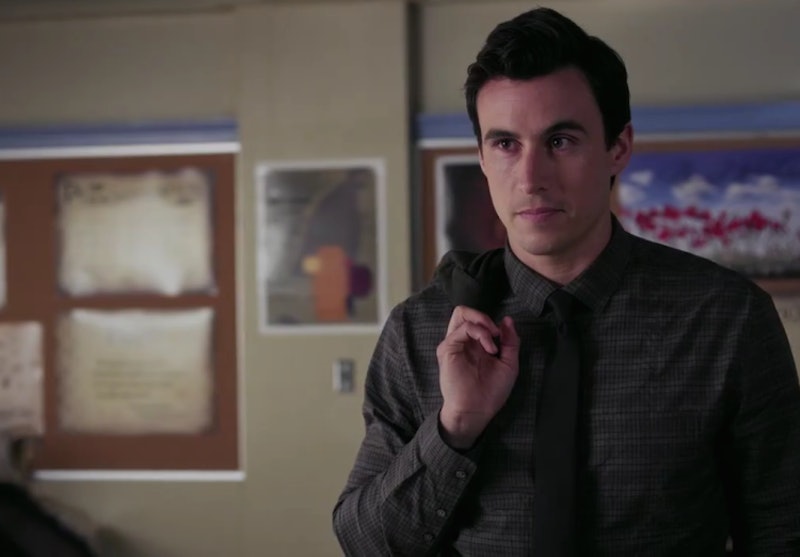 We're only five episodes away from the Season 6 finale of Pretty Little Liars, but as for who is the new person stalking the Liars, it's anybody's (A) game. While we know that Uber A is likely seeking revenge on the person who killed Charlotte — and that they blame the girls for Charlotte's death — the actual identity of the person remains a total mystery. That's not to say that we're completely without clues: in the flash-forward at the end of Season 6A, the Liars referred to the person hunting Ali as a "he," suggesting that, this time, the girls are running from a guy. The "guy thing" is making some fans point the finger at one person in particular: Ali's new love interest and Charlotte's former psychologist Dr. Rollins. But, could Dr. Rollins really be Uber A? Though the clues are strong, there's a real chance this guy could be an even bigger red herring than Sara Harvey was.

Any Pretty Little Liars fan should have been suspicious of Dr. Rollins from the get-go. Rosewood doesn't always have the nicest newcomers (remember Nate, aka Lyndon, aka Maya's killer?) and that's especially true when it comes to love interests. Dr. Rollins has a few strikes against him already because he's close to both Alison and Charlotte, two people who tend to attract shady people — because, well, they were pretty shady people themselves. But that's not the only reason why people are suspicious of this doctor. In recent episode "Do Not Disturb," Uber A is seen wearing clothing with a similar fabric to an outfit that Dr. Rollins wears in Tuesday's episode "Where Somebody Waits For Me." This was pointed out by user KayBonnie on Reddit, who wrote:

The gray sweater dr Rollins wore last episode looks like the same fabric/color as the "A with doctor gloves" was wearing while watching Caleb's badass virus thing... I think that doctor Rollins fell in love with Charlotte/cece.

So, is that our answer? Dr. Rollins Uber A, and the rest of the suspects can go home? I'm thinking maybe not, mainly because the show is working very hard to turn Rollins into a worthy suspect. In December, I. Marlene King told Variety that the conclusion of Uber A's storyline will end with Season 7 — not Season 6. That means that anyone who looks super suspicious in these upcoming episodes likely won't be the ultimate Big Bad — what fun would watching PLL be if the most obvious A suspect turned out to be the show's worst villain ever?

That's not to say that Dr. Rollins can necessarily be trusted — there's a real chance that he could be more foe than friend to the Liars, or even working with Uber A in the same manner as Sara did with Charlotte. Right now, Rollins is our number one Uber A suspect, but I'm not hedging my bets on this guy just yet.