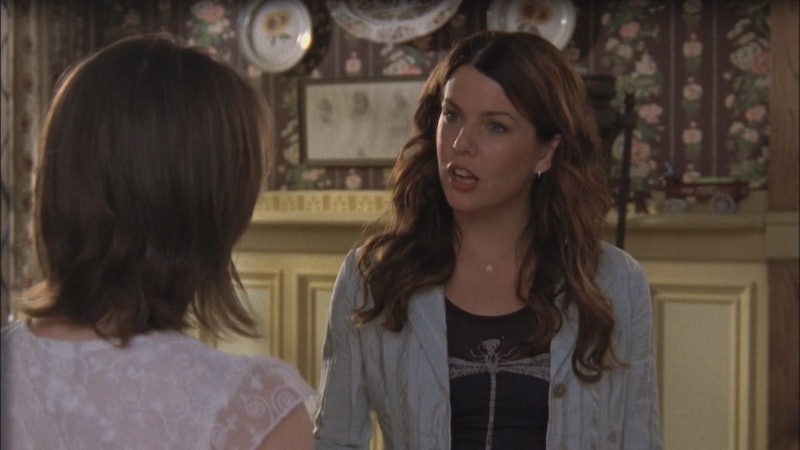 Considering there are 153 episodes of Gilmore Girls, taking up the task of choosing one episode to define a character like Lorelai Gilmore could mean sorting through a veritable smorgasbord of storylines and significant moments from the show. But, for me, it's an easy choice: I firmly feel as though Season 4, Episode 22 "Raincoats and Recipes" is the episode that completely lets the audience know Lorelai inside and out.

It's no secret that Lorelai's the best. She's mostly everybody's favorite character for countless legit reasons: she went from having everything to having nothing and doing just fine all the same, thank you very much; she's plucky; her repertoire of one-liners probably has Oscar Wilde turning in his grave with envy; and her pop culture references are so dense that if she was a real person, she'd have taken my job a long time ago. However, what I love about this episode is that it doesn't just highlight Lor's good qualities — it acknowledges the bad, and sees her take steps to move past them. The two qualities about Lorelai that are less appealing which this episode addresses? Her difficulties with commitment and her best-buddy style dynamic with Rory. The latter, though the heart of the show, turns out to be probably the more troubling of the pair: throughout the series, it's hard to push away the sense we got sometimes that Rory, not Sookie, is Lorelai Gilmore's closest friend. The thing is, though that's lovely and saccharine sweet, it doesn't always make for good parenting, because parenting involves eye-roll inducing things like discipline and boundaries.

Rory, though maybe not consciously, occasionally took advantage of Lorelai's buddy-buddy relationship with her — and this episode is one instance of that. When Rory starts taking advantage of her return to Stars Hollow to make eyes at her now-married ex boyfriend Dean, this feels distinctly off. If Rory's ever done anything that turns your stomach, this is probably it. Stars Hollow's most photogenic bookworm has kicked him to the curb many, many times in her past to opt for Jess instead. But now that Jess is single and pursuing her again while Dean's forbidden fruit, suddenly Dean is the more tempting of her romantic options. Which is both relatable and disappointing, right? Many of us have been there, but it doesn't make Rory's ultimate decision to sleep with married Dean any less painful to watch.

When Lorelai heads home on the night of her inn the Dragonfly's practice opening, she's in full-throttle BFF mode. She's rattling away about Kirk running about naked and how Rory's missing everything and why isn't she at the hotel dinner with everyone else? When she sees Dean coming out of her daughter's room and the pair both rumpled and out of breath, Lauren Graham's face is a masterpiece. We've never seen her look at Rory like this:

Dean leaves, and she heads straight to Rory's bedroom to find the sheets all messed up. We know Lorelai, for one of the first times ever, is in full mom mode. "So, what did he borrow?" she asks, parroting Rory's terrible excuse right back at her. Rory comes clean and 'fesses up — he wasn't really here to borrow anything. "But he's married," says Lorelai. "You don't understand the situation," says Rory, with the immense chill of a woman whose mom has been acting like her best friend for the last 20 years. "He's married," Lorelai reiterates. "Yes but —" Rory attempts, but Lorelai continues: "But then I understand the situation."

When Rory cites Dean's excuses, they sound flimsy coming out of her mouth: he's not happy with his wife. Lorelai swoops: so, he's leaving her? They're getting divorced? He's got a lawyer, they've begun dividing up the assets? Yes, this sucks for Rory, who's just lost her virginity in the most depressing way possible, but this is the first time we've really seen Lorelai playing bad cop, and it's a huge moment for both her relationship with Rory and her character. It shows us that Lorelai, despite her charisma, intense chill and quippy one-liners, puts her foot down when she needs to, even with Rory. As Lorelai says, "But I didn't bring you up that way," (aka, to disrespect other women by sleeping with their partners), it proves that despite their amazing connection, Lorelai's consciously been mothering Rory all along and trying to bring Rory's morals in line with her own. In short, Lorelai comes out of this scene with a lot more substance to her character: We realize she's not just a friend to Rory, she's first and foremost her mother and she's not afraid to play that card when she has to.

The episode also forces Lorelai to face up to her own somewhat morally questionable take on romance when, after a chance conversation between the guy Lorelai's sort-of-seeing (Jason) and the guy she's pined after forever and now is also be sort-of-seeing (Luke), Luke finds out he has competition and confronts her with the facts: he bought her flowers, something he's never done before; he walked her home from the wedding; he felt like "there was a moment," something she wholeheartedly endorses. "But you're taken," he says.

The episode simply builds on what we already knew: Luke's no player and he doesn't really do casual. He's old-fashioned and reliable in the best possible way and the world for him is more black and white than for other people. Lorelai knows this, she's known him for years after all — so why would she try and do the simultaneous dating thing? She hears him out and apologizes. This is significant: It shows she's making herself vulnerable by being open to criticism and is moving past her commitment issues. Instead of recoiling from Luke's very concrete avowal of his feelings, she's clearly into it — exhibit A, the kiss above. This marks bold new territory for the woman who once took a spontaneous road trip to avoid her own wedding. It gives the viewer hope — maybe Lorelai's capable of change.

Have I inspired you to dizzy new heights of Lorelai love? I hope so — if not, line up "Raincoats And Recipes" and get ready to see Lorelai at her best.