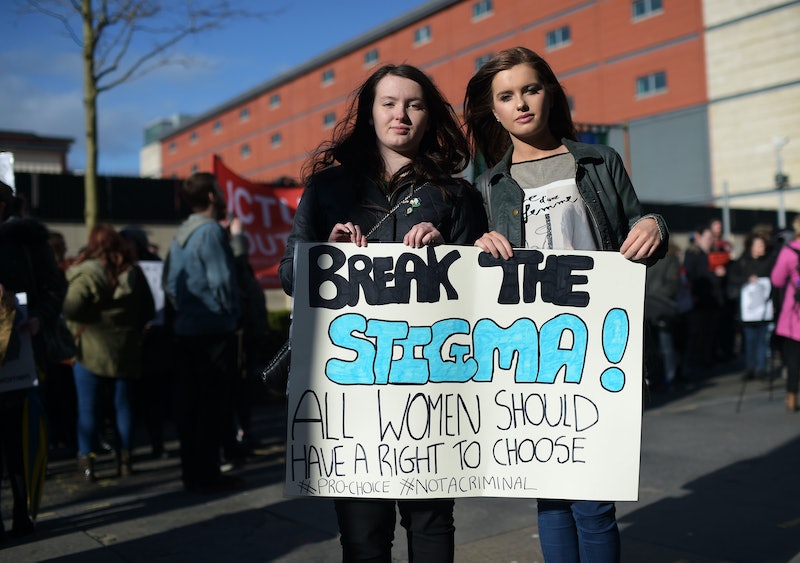 Reproductive rights have come under attack throughout the country over the past few years, and these attacks usually involve governing bodies consisting primarily of men debating choices mostly made by women. And Heidi Seltz's Minneapolis Star Tribune letter to the editor points out exactly what's wrong with that. Addressing backlash against the recent Whole Woman's Health v. Hellerstedt abortion ruling, Seltz's letter calls out men who want a say in women's reproductive choices.

If you're not familiar with the case, last week, the Supreme Court struck down Texas's HB2, a bill that would have severely limited access to abortion. It would have required that anyone providing an abortion in the state have admitting privileges to a hospital within 30 miles and that abortion centers meet the same standards as surgical centers, which could have left only 10 abortion centers in the state. The majority decision read that "both the admitting-privileges and the surgical-center requirements place a substantial obstacle in the path of women seeking a previability abortion, constitute an undue burden on abortion access, and thus violate the Constitution."

Pro-choice advocates celebrated this decision as a victory for reproductive rights. But apparently, not everyone was happy with it. In her letter, Seltz mentions that the Minneapolis Star Tribune published two letters by men arguing against the decision.

"It'd be nice if men would shut up and editors would help them," the letter reads. "Unless you have a woman's body, I don't want to hear your opinion on what women's bodies should or should not do." But the best part is the conclusion: "Perhaps newspaper readership among young people would grow if every time we opened a paper, we didn’t have to read old men’s fusty opinions about uteri."

That last line contains a hint of ageism, since older people aren't necessarily politically backwards, and it's important to note that there are women without uteri and people who aren't women who have them. The letter is otherwise on-point and pretty funny, though. Read it in full here:

Through this letter, Seltz points out that people shouldn't make a decision that affects many people without a personal understanding of that issue. But more importantly, nobody should be making a decision for other people regarding what they can do with their bodies. If it's your body, then it's your choice, period.

More like this
What The History Of Pride Month Means For Celebrations Today
By Jay Polish
10 Times Boris Johnson Got It Wrong On Trans Rights
By El Hunt and Sam Ramsden
Is TikTok’s “Villain Era” Trend Just An Excuse For Bad Behaviour?
By Chanté Joseph
How To Support Gun Control Reform Right Now
By Morgan Brinlee and Carolyn Steber
Get Even More From Bustle — Sign Up For The Newsletter