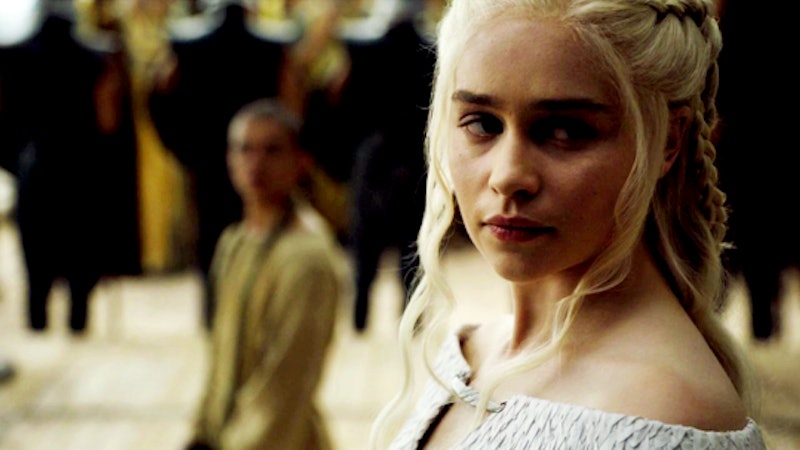 Just a few seasons ago, the mothers of Game of Thrones were the lowest of the low. But I believe the rise of mothers on Season 6 Game of Thrones gives us enough evidence to assume we already know who will win Game of Thrones : Daenerys Targaryen. And why Daenerys, who while often referred to as "mother of dragons" isn't even a biological mother and not, say, Cersei, who actually had children? Or if we're talking about women as symbolic mothers, why not Melisandre, whose resuscitation of Jon Snow's corpse implies she possesses the same ability to give life as mothers do? Ultimately, it's all about what good mothers these women are, whether literally or symbolically. Let’s review the evidence.

In the third season of Game of Thrones, mothers were presented as the most vulnerable of the cast — in the gruesome Red Wedding scene, two key mothers (Robb’s pregnant lover and Robb’s mother, Catelyn Stark) were subjected to acts of horrific violence — and let’s just say that the fact they were mothers was used against them physically. Fast forward three seasons on, and both literal and figurative mothers have become the most powerful characters on the show. But while mothers were rewarded in Season 6 Game of Thrones, one clear distinction has been emphasized on this show: bad mothers will be punished.

The bad mother trope is introduced to us in the form of Catelyn Stark’s sister, Lysa. Like in fairytale, Lysa is as bad as Catelyn was good. She’s duplicitous and abusive to Sansa, who she suspects of having designs on seducing her lover, Petyr Baelish. When Petyr kisses Sansa (who presumably doesn’t see this coming), Lysa threatens to kill Sansa by pushing her through the Moon Door. But bad mothers get their comeuppance and shortly after Petyr confesses he has only ever had one true love: Lysa’s sister Catelyn Stark, and with that, he pushes Lysa through the Moon Door to her death.

The bad mother, bad luck trope is most obvious with regards to Shireen Baratheon, Stannis and Selyse’s daughter. When Stannis Baratheon suffers some bad fortune, Melisandre suggests the Lord of Light requires a sacrifice and selects Shireen for the job. Shireen suffers a horrible death that her mother doesn’t protest at or try to prevent — relatively unsurprising, considering the ultra religious Selyse seemed to regard her daughter’s partially marred face as evidence of her innate sinfulness. The day after, Stannis finds Selyse has taken her own life. While Melisandre may have given a life (Jon Snow) she’s also taken one away (Shireen). As such, it’s no surprise when Ser Davos Seaworth discovers how Shireen dies and informs Jon Snow that Snow banishes Melisandre. Melisandre is also forced to suffer the effects of being a “bad mother,” making her seem an unlikely candidate for ending the show on the throne. Her decisions have left her alone, exiled and without support.

This same ethos also rules out Cersei for the throne. While Cersei’s worst decision in Season 6 — effectively handing over power to the Sparrows — was made out of a possessive love for her son, Tommen, and fear of losing him to his bride, Margaery, Cersei's scheme to extricate both her and Tommen from the grasp of the Sparrows was so insanely violent that it’s hard to truly believe it was done purely for the good of Tommen. The death of Margaery and Cersei's torture of the nun who once yelled "Shame" during Cersei's nude walk, implies revenge was at least half the reason for Cersei’s plan. When Tommen jumped out the window to his death after witnessing the explosion, it sealed the deal: Cersei inadvertently killed her own son with her bad decisions. I’d argue this circumstance implies that Cersei will suffer retribution under the karmic scheme of bad-mothership and will perish in the next season — ruling her out as the person who will end the game of thrones on top.

But what about Daenerys Targaryen? As her dragons have become wilder and wilder, her role as mother has only been emphasized. Dany also seems to grow closer and closer to the dragons themselves, with her decisions in Season 6 seeming as ruthless and strong as the dragons’ own brand of justice. When Dany beheaded a repentant rebel against the advice of her counsellors in Season 5, she ushered in a revolution. But the end of Season 6 proved her dictum of strength over diplomacy to be the only one to keep Slavers’ Bay as Dragons’ Bay.

Targaryen has also begun to act as a mother-figure for others on the show. When the Ironborn came to ask to form an alliance with her, she was open and welcoming to their support — on one condition. Dany asked that they give up the brutish, women-abusing behavior traditionally associated with their kin. Like a good mother, Targaryen is tough but fair.

Sure, there are tons of compelling arguments for why Daenerys Targaryen will take the throne, but I believe this is the one the show (as opposed to the books) is leading us to. It couldn’t really be more explicit: in the scene shown below (2:56 onwards), Targaryen even argues that their generation has a responsibility to not be like their parents ("our fathers were evil men"), but to leave the world better than they found it.

Ultimately, it’s a manifesto for being a good parent. Mothers rock and Dany is the mother who most powerfully acts as a force for good in the lives of her "children." This, to me, acts as the most compelling proof that it's Daenerys and Daenerys alone who will win Game of Thrones.

More like this
'Bridgerton' Star Nicola Coughlan Confirms Season 3 Will Focus On Colin & Penelope
By Grace Wehniainen and Alyssa Lapid
Everything To Know About The Possibility Of 'The Essex Serpent' Season 2
By Rachel Mantock
Drag Queen Drama 'Femme' Is A Fresh Take On The Classic Revenge Thriller
By Sam Ramsden
'Gentleman Jack’s Cast & Crew Are Keen On Season 3, Too
By Frances Stewart
Get Even More From Bustle — Sign Up For The Newsletter