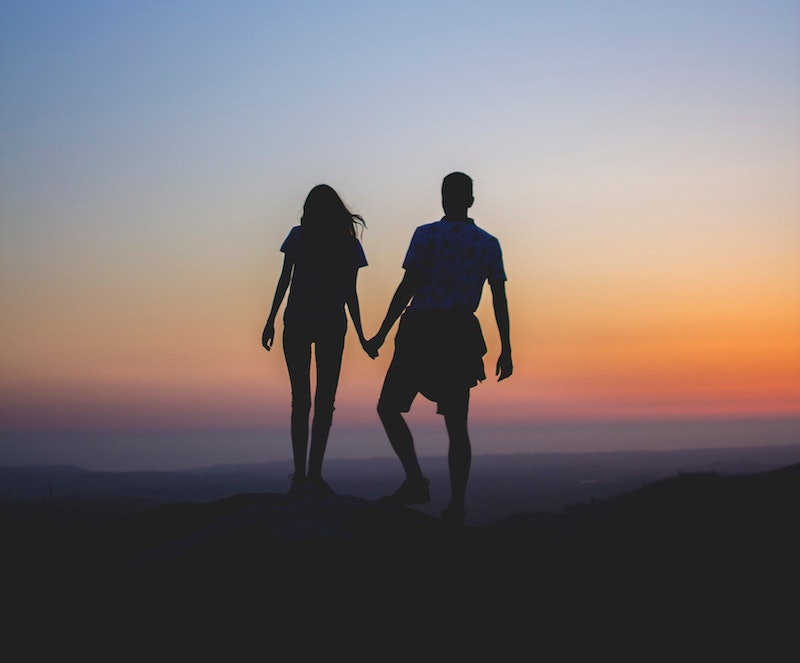 Isn't it a fantastic feeling when you stumble upon a column that makes you think, "I can't believe I survived without these stories in my life"? Ever since I read my first New York Times "Modern Love" essay, I was hooked by the series' concept of meditations on connection. The New York Times began publishing essays on the subject, written exclusively by NYT readers, in 2004. However, the series has experienced an upswing in popularity in recent months. This is mostly due to the excellently-produced Modern Love podcast (from WBUR) that's been around since January of this year. In each episode, a talented actor brings a favorite "Modern Love" article to life. Listening to an episode is a great way to freshen up your commute, or provide a soundtrack to your afternoon walk.

But with all these essays, podcasts, and even a Modern Love: 50 True and Extraordinary Tales book out there, I sometimes feel like there's an embarrassment of riches when it comes to "Modern Love." How on earth am I supposed to pick the best stories? Since I know I'm not the only one with this problem, I dug into the "Modern Love" archives from the past three years and picked eight of my favorite stories from 2014-2016. Whether you're a newcomer to the series or you've been a longtime fan, you'll enjoy this assortment of essays on all kinds of unlikely love.

1. Just One Last Swirl Around the Bowl

Dave Barry, the Pulitzer Prize-winning reporter and author of the New York Times' "This Land" column, wrote this essay about his daughter's dying fish. One of the few Modern Love pieces that isn't about romantic love, the essay explores his memories of his parents' deaths, and how he tried to care for them as best as he knew how during their final days. While his daughter comes to terms with the fish's imminent death, Barry, too, reflects on what it means to watch someone you love die.

You can also listen to Jason Alexander read this on the Modern Love podcast, and he does a bang-up job.

2. All Twisted Up by Genderbending

Delacey Skinner doesn't know what to think when she discovers that her ex-boyfriend is dating a trans woman. This information causes Skinner to question her own identity as a woman. She's never felt particularly comfortable in her femininity, so what does it mean that her ex now has a relationship with someone who presents herself as far more traditionally feminine than Skinner herself ever has? Skinner's essay is a poignant and thought-provoking take on gender identity.

3. Putting Love to the Stress Test

What happens when you meet a person so scarily similar to yourself that you assume something has to go wrong? In this essay, Jasmine Jaksic signs up for OkCupid and finds a man who's answered almost every question on the site in the same way as her. Since she and her new beau are both software developers, they decide to implement a real-life version of the "stress test," which is the practice of testing a computer program to its limits. What Jaksic discovers during the four weeks of their stress test changes the way she thinks about the necessities of a relationship.

After abandoning her life as an academic, Julia Anne Miller fulfills her decades-long dream of moving to New York City. While working as a writer for a test-prep company, she sets out to explore the city. Each of her coworkers nurses an artistic dream, and the test-prep job is only a way to pay the bills. Miller's dream: to perform. One night, she shares a cab ride home with a coworker, leading to a bizarre sexual experience. This forms the basis of her eloquent meditation on what it means to get what you want.

5. One Bouquet of Fleeting Beauty, Please

This stunning and lyrical essay will make you smell tulips and lilies as you're reading. Written by Alisha Gorder, it tells the story of Gorder's time at a floral shop, arranging and selling bouquets to people trying to communicate with their loved ones through flowers. People often send commonplace messages with their bouquets, such as "Happy Birthday" (H.B.), "Happy Anniversary" (H.A.), and "Thinking of You" (T.O.Y.). But sometimes, what they're trying to say isn't so simple. Gorder weaves those anecdotes into the fabric of her own life: when she was 18, her boyfriend of two years killed himself, and she was forced to learn an agonizing lesson about love.

6. One Thousand and One Nights of Laundry

Wendy Rasmussen, the author of this melancholy reflection on love and loss, married an Iraqi refugee and then divorced him. Her essay captures an episode of her life in which she went to his house with their sons to do laundry, since she didn't have a working laundry machine. One night, her drunk ex-husband told her a story about escaping from Iraq by crossing the Saudi Arabian deserts, and about the man he left behind in the sand. Rasmussen's essay is subtle, but evocative, and it's a read you won't forget.

7. Finding My Own Rescuer

Anna March brings us this story about the love of her life, a man disabled in a car accident when he was 16. Though he has to use a wheelchair, Adam is anything but helpless: he can cook, walk the dogs, and drive, and he helps keep March's life in order when they move in together. But their new house has more than one story, and while they're waiting for the proper ramps to be installed, the tables turn in their relationship. Now March is the one caring for him - and she doesn't know if she's up to the task.

This is the essay that made me start following "Modern Love" - mostly because I've seen the exact same story play out in my friends' lives so many times. The author, Jordana Narin, writes about the man who occupied the space between friend and boyfriend for so long that she hardly knew how to handle her relationship with him - especially because, as a Millennial and college student, she didn't know how to admit her feelings. If you've tried to navigate the muddy waters of hookup culture, this is an essay that will resonate with you.