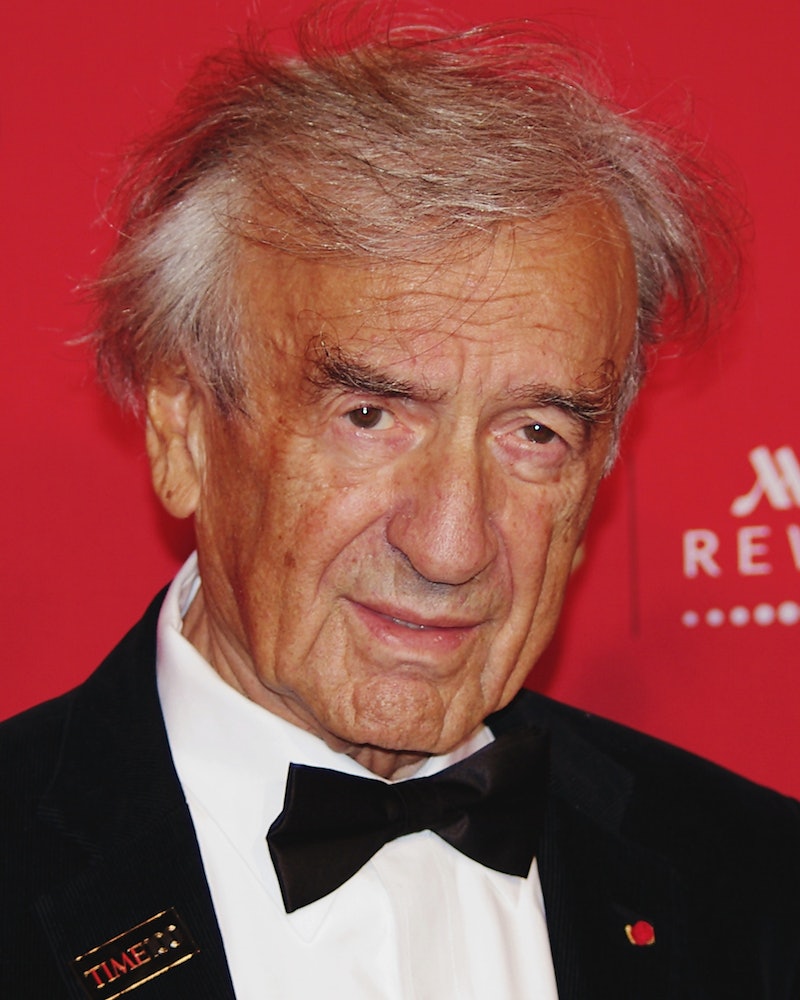 On September 30,1928, a boy was born in Sighet, Romania. That boy would go on to lead a long and creatively fruitful life, but his mother, father, and younger sister would all die during the second World War. Many years after the war, he would write about his experiences surviving the German concentration camps with such harrowing detail that it would bring the realities of Auschwitz and Buchenwald to life. This man, of course, was Elie Wiesel, who died on Saturday, July 2. During the course of his life, he won the Nobel Peace Prize and wrote, among other works, a critical piece of literature: Night. And if you've never read any of his work before, now is the time to begin. As the world celebrates Wiesel's contribution to the world — not only did he write 57 books, but he illuminated the terrors of the concentration camps so that others would understand what he and other prisoners experienced — take this opportunity to read Night.

The reason why I'm insisting is that Night is one of the most important books ever written. I don't say that lightly. In 1944, Wiesel (a Romanian-Hungarian Jew) and his family were deported to Auschwitz. For the better part of the next year, Wiesel would witness unthinkable acts over and over: his mother and baby sister taken away to the gas chambers, children burned in the crematoriums, a young boy hanged while the entire camp was forced to watch. Although he would survive, he would watch his father weaken during their forced labor, a death march through the snow, a bout of dysentery, and a beating by SS officers (which Elie, or Eliezer, as he called this version of himself, overheard but couldn't stop). Eventually, his father was taken to the crematorium. Three months later, the Allies liberated Eliezer's camp, but he would have to navigate his newfound freedom on his own.

Few have experienced anything like what Wiesel went through during World War II. It's sometimes easier to look at the number of Jewish men and women who died during the Holocaust — six million — and think, "I can't comprehend a tragedy on this scale." Night boils that tragedy down to one boy's struggle to survive, and, in doing so, makes the abhorrent waste of millions of lives seem shockingly close.

I first read Night three years ago, during a course on the literature of the World Wars. I had read Vera Brittain's A Testament of Youth, a somewhat interesting nurse's memoir, and Mrs. Dalloway: a lyrical novel, but one that often distances itself from the realities of war. I began reading Night, the next title on the reading list, around nine o'clock one night, and didn't stop until I had finished reading. Night is a slim book — the prose is spare and tight — but its short length and unadorned style make its words all the more electrifying. The following afternoon, after I'd taken a break for lunch, I returned once again to Wiesel's book. As I read sentence after sentence describing men watching each other die of starvation and sickness, I had a panic attack. My heart began to flutter in my chest, and my breathing came so fast that I was afraid I'd faint. I had to call my boyfriend and ask him to sit with me until I calmed down.

"Why did reading this make you so anxious?" he asked.

The answer was easy: because I couldn't get the horrors of what I'd read out of my mind. The images were burned there, and I hardly slept for days. Even still, when someone mentions the Holocaust, I think of Wiesel's descriptions of Auschwitz and Buna. I think of young Eliezer, watching the smoke that rose from the crematorium chimneys. I think of him struggling to care for his dying father as he recognizes that leaving his father behind gives him a better chance of survival. I think of him praying to have the strength to never abandon his father — to never give in to complete desperation.

Wiesel at Buchenwald. He's in the second row, seventh to the left.

Night is so crucial because it showed me that the Holocaust happened to individuals, not to a mass of strangers. It has changed the way the world conceives of genocide by putting a face and a name to such terrible suffering. And it shows the beauty in the broken: the fact that Wiesel survived and got a chance to write. Theodor Adorno famously said that "Poetry after Auschwitz is impossible." Because of Night, I know that Adorno is wrong. Writing literature about the Holocaust, and similar barbaric acts, is necessary. It creates a link between the reader and the writer — empathy, in other words. It makes us, the readers, recognize that the Holocaust happened and could happen again.

For all these reasons, Night embodies a terrible kind of beauty. It's the rare book that teaches us how to lead better, more responsible lives. To honor Wiesel's life and legacy, read it here.