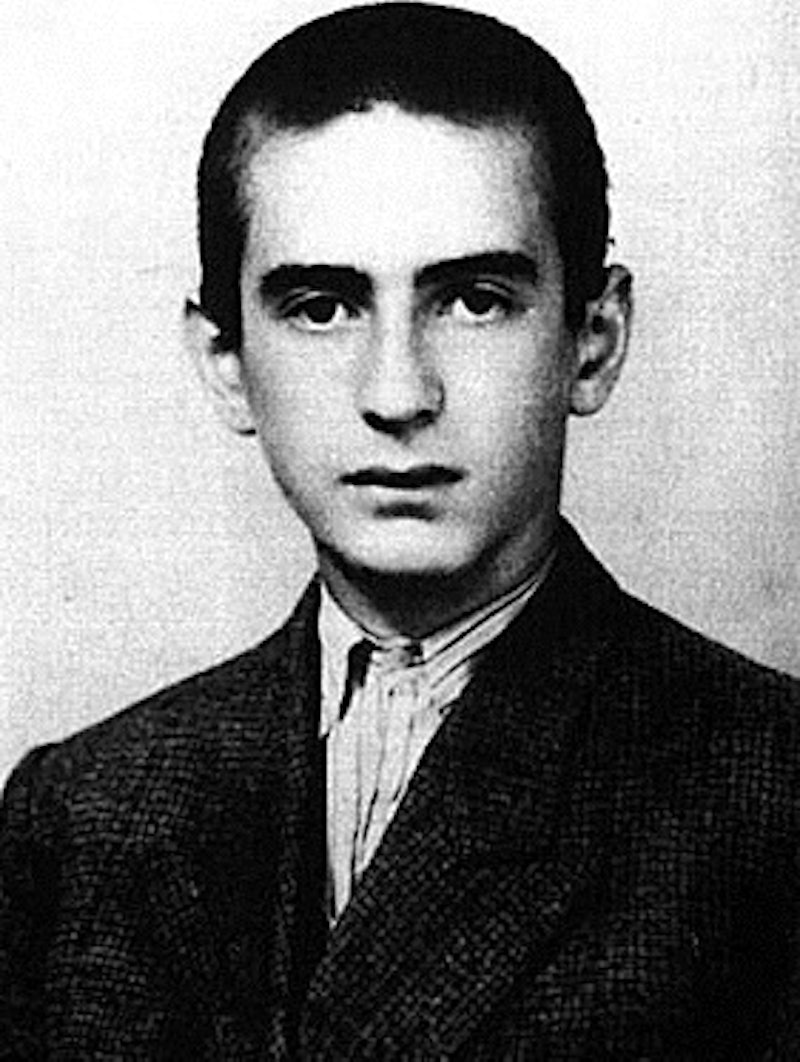 If you've attended high school and/or college in the United States, you've probably read Night, Elie Wiesel's masterpiece about the horrors of experiencing the Holocaust firsthand, and you've seen photos of Elie Wiesel as an empty-eyed concentration camp prisoner. After news broke of Elie Wiesel's death on Saturday, July 2, the world is honoring Wiesel's contribution to the way we all think about the Holocaust. Wiesel wrote many books (including Night) dealing with the repercussions of World War II, anti-Semitism, genocide, and other matters of political activism. In 1987, he was awarded the Nobel Peace Prize in recognition of his work. He was able to channel his memories of Auschwitz and Buchenwald, two of the concentration camps in which he was imprisoned, into a moving book that made the Holocaust feel frighteningly real. He's helped us to understand why the Holocaust was so horrific, and why it's crucial that we never let anything like it happen again.

Wiesel was born in Sighet, Romania, in 1928. He had two older sisters, Beatrice and Hilda, and a younger sister, Tzipora. As a child, he learned how to read Hebrew and studied the Torah extensively, like many Jewish boys. But as he reached his teens, his life was interrupted by the advent of Hitler's Nazi regime. At the age of 15, Wiesel and his family were forced to move to a ghetto: a segregated neighborhood occupied by Jews.

Most ghetto occupants would later be forced into concentration camps, and that fate befell Wiesel's family in 1944. Wiesel and his father were sent to Auschwitz and separated from his mother and sisters. His mother and younger sister were sent to the crematorium, where they died. His father, Shlomo, almost survived the war, but died several months before Allied forces liberated the concentration camps.

Wiesel at Buchenwald. He's in the second row, seventh to the left.

After World War II, Wiesel worked as a journalist, but refused to write about his experiences in Auschwitz, Buchenwald, and Buna for ten years. Finally, however, he was persuaded to pour out his thoughts. The first version of Night was a 900-page memoir that Wiesel eventually shaved down to 127 pages and titled La Nuit (Night in English).

At age 40, he married Marion Rose, another Holocaust survivor. Marion, pictured above in 2012, was the one who translated Night from French to English in 2006 (it had been translated before, but without much acclaim). This was the version that became a best-seller after Oprah Winfrey chose it for Oprah's Book Club. Elie and Marion had one son, Shlomo Elisha.

In 1987, Elie Wiesel won the Nobel Peace Prize. The committee who chose him wrote that "Wiesel is a messenger to mankind; his message is one of peace, atonement and human dignity. His belief that the forces fighting evil in the world can be victorious is a hard-won belief. His message is based on his own personal experience of total humiliation and of the utter contempt for humanity shown in Hitler's death camps."

After winning the Nobel Peace Prize, Wiesel continued his humanitarian and political activist efforts. He was one of the major catalysts behind the building of the United States Holocaust Museum in Washington, D.C., and he spoke out in favor of intervention in wars around the world, including those in Yugoslavia and Sudan. By the time of his death in 2016, he had published 57 books, founded several organizations advocating for Holocaust and genocide survivors, and fundamentally altered the way the world would remember the plight of concentration camp prisoners. His death takes away one of the most eloquent literary voices of the past century, but it's also a moment to honor his legacy and read his works - especially Night .

More like this
At 28, Minnie Driver’s Personal Life Was “Falling Apart”
By Kate Dwyer
16 Novels That Paint A Realistic Portrait Of Abortion
By K.W. Colyard
Why The '365 Days' Sex Scenes Are Good, Even If The Movies Aren’t
By Arya Roshanian
What Is Barack Obama’s Net Worth? He Makes *Way* More Now As An Ex-President
By Hugh McIntyre
Get Even More From Bustle — Sign Up For The Newsletter