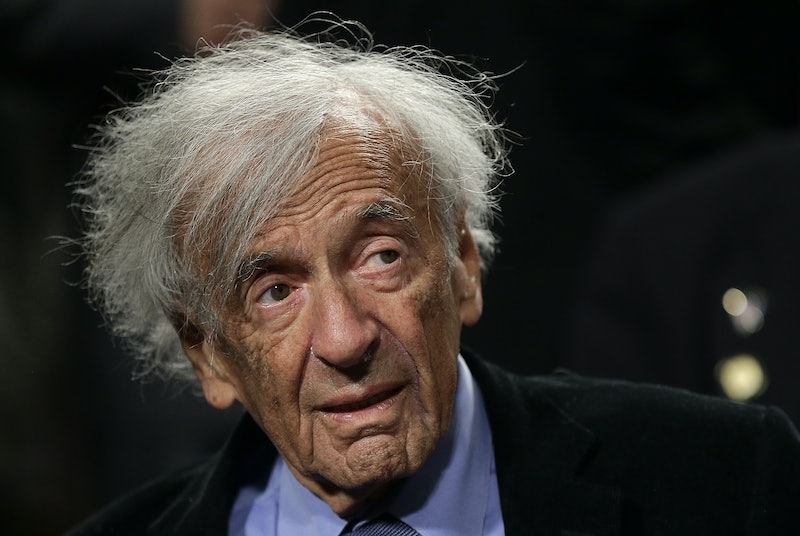 On Saturday, author and Nobel Peace Prize winner Elie Wiesel died at the age of 87, triggering an outpouring of tributes. Wiesel, who was born in Romania in 1928 and imprisoned at the Auschwitz death camp in 1944, was without a doubt the highest-profile living survivor of the Holocaust, a group that's getting smaller as years pass by. And he dedicated his life to ensuring nobody ever forgot what happened ― in that spirit, here's some of what Elie Wiesel said about the Holocaust.

Wiesel was tireless in keeping the history and faces of the Holocaust alive in the public consciousness, both as a way to give proper memorial to its millions of victims, and to caution the world against racism and fatal indifference. That last word, in fact, was one he famously described as the true opposite of love, rather than hate, and "the most insidious danger of all."

Here are five quotations from Wiesel's speeches, writings, and interviews, detailing what he experienced and has since come to believe about the Holocaust. Suffice to say he was a phenomenally eloquent and gifted man, and his history-spanning life is one that should be sorely missed, and hopefully never forgotten.

1. "I have seen something that will haunt me to the end of my life."

From a 1993 interview with Oprah Winfrey, Wiesel recalled the horror of watching the Nazis burn Jewish children alive during his first day at the Auschwitz camp.

I have seen something that will haunt me to the end of my life. That there were children, little children. And what they had done ― 'they' I mean the enemy ― they had dug pits. It seems there was no room anymore in the gas chambers. They would throw those children in the flames, alive. That we have seen that and not gone crazy is, that's a miracle. ... For a while I thought maybe I, maybe I was still a prisoner of my nightmare. But then I met friends, and I told them the same images, and I found documents corroborating it. What we have seen, it's true.

2. "To forget would be not only dangerous but offensive; to forget the dead would be akin to killing them a second time."

Wiesel spoke about why he fights to keep the memory of the Holocaust alive in his 1960 memoir Night.

For the survivor who chooses to testify, it is clear: his duty is to bear witness for the dead and for the living. He has no right to deprive future generations of a past that belongs to our collective memory. To forget would be not only dangerous but offensive; to forget the dead would be akin to killing them a second time.

3. "No one is as capable of gratitude as one who has emerged from the kingdom of night."

In his speech accepting the 1986 Nobel Peace Prize, Wiesel described his experience of encountering Nazi occupation and the Holocaust as a Jewish child as a foray into "the kingdom of night."

This is what I say to the young Jewish boy wondering what I have done with his years. It is in his name that I speak to you and that I express to you my deepest gratitude. No one is as capable of gratitude as one who has emerged from the kingdom of night. We know that every moment is a moment of grace, every hour an offering; not to share them would mean to betray them. Our lives no longer belong to us alone; they belong to all those who need us desperately.

4. "The Opposite Of Love Is Not Hate, It's Indifference"

As mentioned above, Wiesel was a staunch critic of indifference, viewing it as a negligence that can ― and in the case of the Holocaust, did ― have fatal consequences.

Wiesel also had a stated disdain for neutrality in moments of oppression and torment, as he voiced in his Nobel Peace Prize speech, calling for interference when lives are in danger and human dignity is in jeopardy.

We must always take sides. Neutrality helps the oppressor, never the victim. Silence encourages the tormentor, never the tormented. Sometimes we must interfere. When human lives are endangered, when human dignity is in jeopardy, national borders and sensitivities become irrelevant. Wherever men or women are persecuted because of their race, religion, or political views, that place must ― at that moment ― become the center of the universe.

More like this
Read Dan Levy's Heartbreaking Message After The Club Q Shooting
By Stephanie Topacio Long
The 'Love, Lizzo' Harry Styles Scene Is Just 1 Moment That Made Fans Feel Seen
By Brad Witter
Kate Middleton & Prince William Were Booed & Mocked On Their U.S. Visit
By Jake Viswanath
Here's The Role Lady Susan Hussey Played At Buckingham Palace
By El Hunt
Get Even More From Bustle — Sign Up For The Newsletter