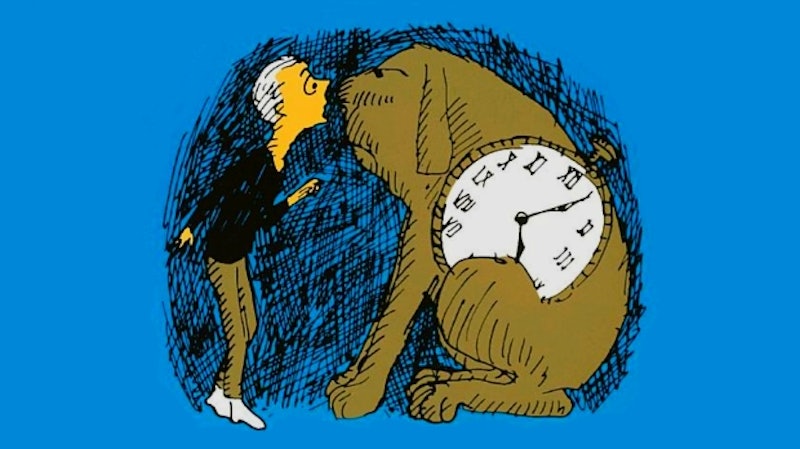 The Phantom Tollbooth by Norton Juster is a classic book for young readers, one that nearly every millennial I know read in elementary school. As you may recall, the story of The Phantom Tollbooth unfolds as a boy, Milo, discovers that a tollbooth and car have mysteriously appeared in his room. When he walk into it, he finds himself in an imaginative place called the Lands Beyond. He befriends Tock, a literal watchdog (whose body is partially made of a clock), and the Humbug, an insistent, beetle-shaped creature. The trio embarks on an adventure throughout the Lands Beyond, meeting a variety of strange people and places along the way.

The Phantom Tollbooth is an ode to the English language, with all of its strange idioms and wacky patterns. Many of the things Milo encounters are literal interpretations or anthropomorphic personifications of expressions. Milo saves princesses named Rhyme and Reason; he gets to the Island of Conclusions by jumping; he drives through the twin cities of Reality and Illusions. Everything in the Lands Beyond is a pun, making this classic a wildly fun romp that also taught us a lot about how language and the world work.

But, one of my favorite things about language is that it's constantly evolving. The Phantom Tollbooth was published in 1961 — over fifty years ago. Which means that (especially with the rise of internet language), English has changed a great deal. So that got me thinking: if Norton Juster had penned The Phantom Tollbooth in 2016, what modern-day devices might we see come to life? So, I give you a list of my ideas:

In the 2016 version of The Phantom Tollbooth, Milo would not just let Tock and The Humbug ride along in his car for free. Upon receiving his car, he'd immediately register with Uber or Lyft, and connect with them through the app. It would be the zaniest Lyft Line experience ever, and the Humbug obviously wouldn't tip.

Every time anyone goes into the little village of Thursday, they're flung, catapult style, a few miles back.

Milo would encounter a gigantic sea called the Internet, filled with hundreds of tiny fish called Clicks. He would string clickbait onto a fishing line and try to catch them. Clickbait would probably look a lot like cotton candy.

Like the opposite of the Lethargians, a meme would be a tiny little creature who would pop up again and again as Milo travels, making the same jokes over and over. There'd be many different species of meme. In my mind, they look a lot like Pokemon and have squeaky voices.

Milo goes to a party that is, in fact, very brightly lit. As the party becomes more fun, it becomes brighter and brighter.

In the Lands Beyond, these would be like mosquitos, buzzing around and latching onto you, blooming into a label. They'd seem to pop out of nowhere. For instance, when something mildly cool happens to Milo, suddenly a "#blessed" tag would zoom in and bite him.

In the Lands Beyond, a squad goal would be a literal goal. As a sport, you and your friends would run into it in, and block other squads from getting in. Milo and his new acquaintances would obviously give this game a shot.

Snapchat in the Lands Beyond would be an actual language, wherein speakers snap their fingers and strike poses in order to communicate.

Of course, we can't forget about the verbification of the name "Google." Perhaps Milo would encounter The Googler, a Sherlock Holmes-type who instantly knows all knowledge at the drop of the hat.

In the Lands Beyond, I think "YAAAAS" would have to be embodied by a person/creature called The Yas. She would have a huge amount of energy at her disposal, with the ability to instantly heal and lift up any person she encounters.