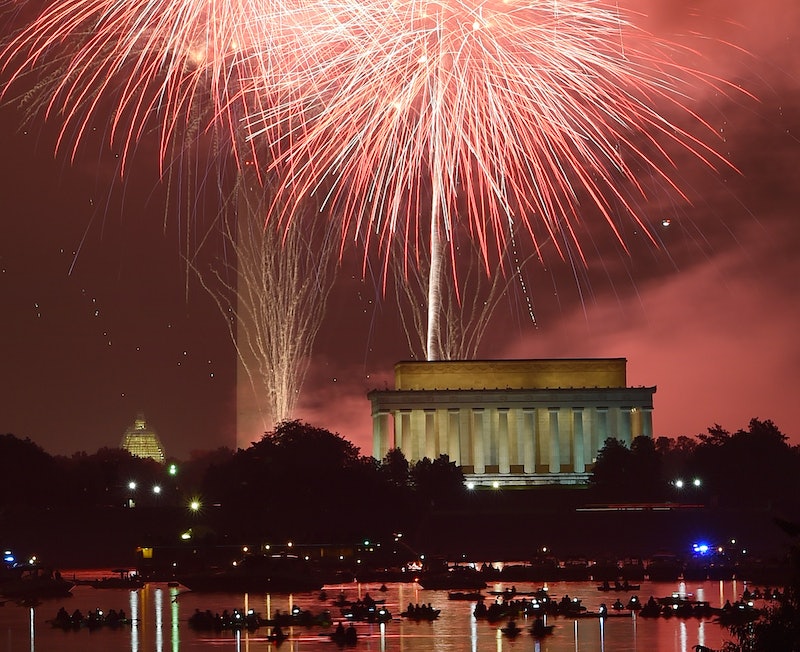 Every year, July 4 is brought to a close with the most American of traditions: Setting explosives on fire and enjoying the colorful, deafening aftermath over the remains of a barbecue. It's a staple of Independence Day celebrations, but have you ever wondered why we set off fireworks on July 4? It's a tradition that's existed as long as the country itself, and we have John Adams to thank for suggesting it in the first place. (He was also on the committee that drafted the Declaration of Independence and was partially responsible for one of the most hilariously dishonest election campaigns in early American history, so the man clearly led a busy life.)

Fireworks are thought to have been invented more than 1,000 years ago in China, where early firecrackers may have been used to ward off unwanted guests (or spirits, depending on the account). According to Smithsonian, soldiers later attached these pyrotechnics to arrows and catapults. As gunpowder spread to other countries on the Silk Road, fireworks became a common part of celebrations and holidays.

This brings us to July 3, 1776, aka the day after Congress voted for independence from England and before it officially adopted the Declaration of Independence. In a letter to his wife, John Adams declared that the United States' newfound independence should be celebrated in ways that will sound oddly familiar. According to the American Pyrotechnics Association, here's what he wrote:

The day will be the most memorable in the history of America. I am apt to believe that it will be celebrated by succeeding generations as the great anniversary festival... It ought to be solemnized with pomp and parade... bonfires and illuminations from one end of this continent to the other, from this day forward forevermore.

According to Slate, the first Independence Day fireworks were set off in 1777 in Boston and Philadelphia, possibly as a way to boost morale in the ongoing Revolutionary War. The tradition spread to other parts of the area, and over the next century, cities unofficially competed for the best displays. Meanwhile, pyrotechnics became available to the public — in fact, U.S. News reports that the streets often became unsafe during Independence Day celebrations. This led many cities to begin cracking down on the sale of consumer fireworks, but it hasn't stopped Americans from attending official displays.

There you have it! Considering how popular fireworks displays are today, you'll be enjoying the ever-so-American tradition of bright colors and deafening explosions tomorrow whether you like it or not.

More like this
25 Quotes About Love To Share During Pride Month 2022
By Madeleine Aggeler and Emma Garza
How To See The Lunar Eclipse On May 15-16, 2022
By Kaitlyn Wylde
Photos Of Boris Johnson Drinking At A Downing Street Lockdown Party Have Surfaced
By Bustle UK
How To Protect Your Digital Privacy If You Need An Abortion Post Roe v. Wade
By Kaitlyn Wylde
Get Even More From Bustle — Sign Up For The Newsletter