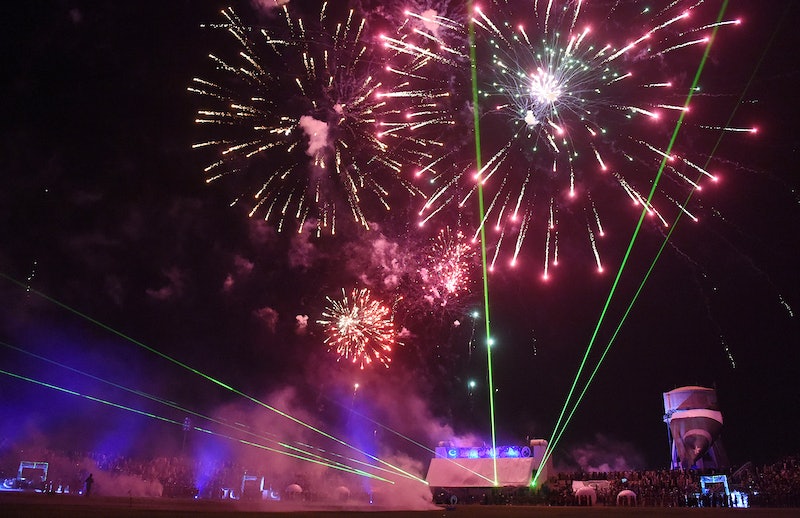 The Fourth of July may nominally be about the day the United States wrote Great Britain its final breakup letter, but every American knows what it's really about: Massive fireworks displays. (Also, hot dogs.) But are fireworks legal? Depending on where you live, there may be a snag in your plans to demonstrate your patriotism in the most colorful, explosive way possible; although many states allow the use of consumer fireworks permitted by federal law, you should definitely find out if they're legal in your area before boasting about the epic pyrotechnics you have planned this year. After all, police and/or firework-related injuries tend to put a damper on things.

Aside from the addition of color and aerial shells, fireworks haven't changed much since their invention in China more than 1,000 years ago. As The Verge explains, "Fireworks today [have remained] much the same: a shell, an explosive, and a fuse." The operative word here is "explosive" — they may be dazzling, but even consumer fireworks, which typically contain weaker explosives than the professional variety, are still capable of causing serious injury.

With that in mind, it's no surprise that many states have stringent laws regarding what types of fireworks can be sold for public use. Here's your guide to the legality of fireworks across the United States — but remember that regional laws may supersede the state's, so it's important to check your local regulations.

According to the American Pyrotechnics Association, there are three states where consumer fireworks, including sparklers, are totally banned: Massachusetts, Delaware, and New Jersey.

Only The Small Stuff

The Pyrotechnics Association notes that Illinois, Iowa, Ohio, and Vermont only allow novelty fireworks like sparklers and noisemakers.

Some (Or All) Types

Other states allow the sale of certain non-aerial, non-explosive fireworks like fountains and ground spinners, although you may have to apply for a license. Finally, some states allow the sale of most or all consumer fireworks, including the aerial variety. However, the specifics vary in even these states, so check out the Pyrotechnics Association's guide to individual state laws for your local regulations.