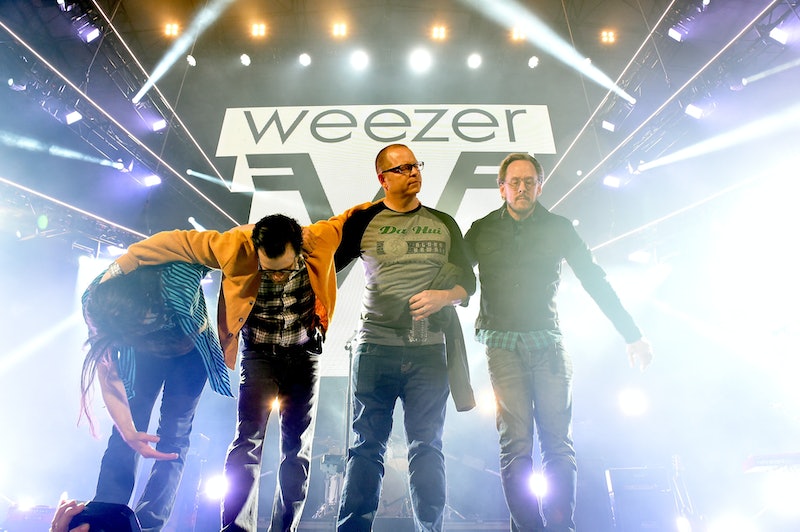 Sound the horns, wave a flag, and roll out the red carpet, because Weezer is out with new music. It's not just any new music, either — it's some very pointed, very timely patriotic music. Case in point, not only is it a good fit for the Fourth of July weekend, but it's a jam you'll be playing throughout the entire summer. And, I don't know about you, but I always love a two for one type of deal. As the lyrics to Weezer's new song, "I Love The U.S.A," express, it's nothing what you'd expect, but that's what makes it so great.

The unexpected part probably also has to do with the exceptionally cool but strange reason for the song's release in the first place. Entertainment Weekly relayed that the band put out this song for "NASA’s Juno, a spacecraft set to reach Jupiter’s orbit July 4." I mean, not to steal the thunder from my pal Drake, if that doesn't spark the song of Summer '16, than what will? The publication also reported via annotated lyrics by Weezer's Rivers Cuomo on Genius that the song stemmed from the fact that, "We were on tour abroad, and it got me thinking a lot about America, which lead to me write 'I Love The U.S.A.'" I mean, it makes sense to me.

As interesting as the behind-the-scenes information about the song is, the actual finished product is what's really enticing about it. It's the absolute perfect song to sing along to, with vigor.

Just take a look at the first verse and you'll know what I mean:

Ain't that bad a placeI was born that wayI bite my fingernailsStill got bills to payYou sure know what to sayI'll put you in your placeLand of the free, I'm on my way

Why does it have song of the summer potential? Well, because it's unflinchingly honest, perhaps a bit uncomfortably so, and yet still somehow sentimental. Cuomo wrote the below about the last verse of the song, which reads "Planes up in the sky/There's a missing man/A boy who didn't make it."

Pop some jiffy pop“Invincibles” is onin the mausoleum

We can do the mathDeath from birth subtractSwaddling our children

The lyrics are relatable because they're genuine. EW pointed out that Cuomo even references in the Genius notes the "I bite my fingernails line" as one he stuck in there because it's one of his lifelong habits. And, if that doesn't hook you, the belt-able chorus most certainly will. It goes a little something like this:

Simple and to the point, but true. Also, extremely Instagram caption-able am I right? I can envision all of the Fourth of July and Labor Day posts as we speak. But, back to the summer-at-large thing. The seasonal references are ripe in the following verse:

Stop at coffee beanThis is like a dreamLet's run across the beachMama, what's the deal?Nothin's wrong with meStill waters running deepHome of the brave, dog on a leash

More than anything though, the lyrics pull you in and are relatable because they're genuine. And, in my humble opinion, it's high time a song of the summer packed this sort of punch in an understated sort of way. The back and forth, good vs. bad feelings on a nation the band loves but may not always like seems reflective of where the country is at now. Leave it to Weezer to get the job done.