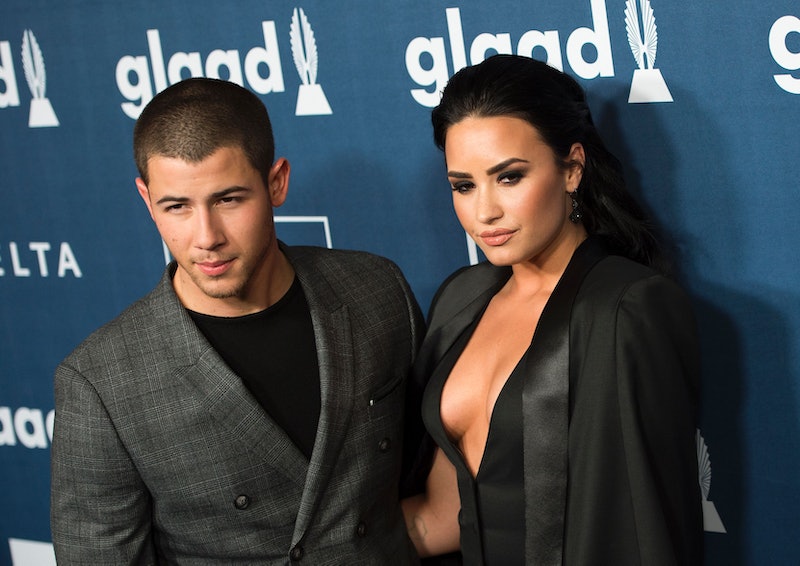 In a somber yet uplifting move, Demi Lovato and Nick Jonas are doing their part to make sure that no one forgets about the shooting at Pulse nightclub in Orlando, or the people who lost their lives and loved ones because of it. And the stars are doing it in the best way they know how: through music. Over the weekend, the duo sang an ode to the victims while on their tour, but somewhat surprisingly, it wasn't any of their songs that they chose to perform. Instead, Lovato and Jonas invited Andra Day to sing her song, "Rise Up" with them for Orlando, and not only was it incredibly moving, it spoke to a greater issue at hand. The song is all about seeing a problem and doing something about it, not just talking — in other words, rising up.

It was incredibly moving, partly because Day wasn't the only person included in the performance. Lovato and Jonas had, as Entertainment Weekly points out, "an 'extremely special' person named Hank" to address the crowd in a less melodic, yet still poignant way. The spirit of the prayer Hank asked the audience to join in on with the performers was less about any specific deity and more about a sense of togetherness in the here and now. Most of all, it seamlessly connected to Day's "Rise Up" and made the whole thing come together.

Day's incomparable vocals along with the heartfelt tune made honoring the Orlando victims all the more sentimental. This was a musical moment that will stay with you, one that you will be glad to call yourself a fan of Lovato and Jonas for. The reverence given to this special, public moment is something to be thankful for, because it continues to bring awareness to the issue at hand, and Hank's words speak to that.

He proclaimed this about the "deadliest shooting in America's history," saying:

We want to pause in the midst of this exciting night, in the midst of this beautiful night, and we want to pause and say a prayer. A prayer of healing. And for you, a prayer is just an ask, so what I want you to do is just want to invite you to join us in praying to whatever God is to you, but I’m going to ask that we do this together, so when we pray together, we heal together.

He went on to say,

You can see for yourself when you watch the "Rise Up" performance below: