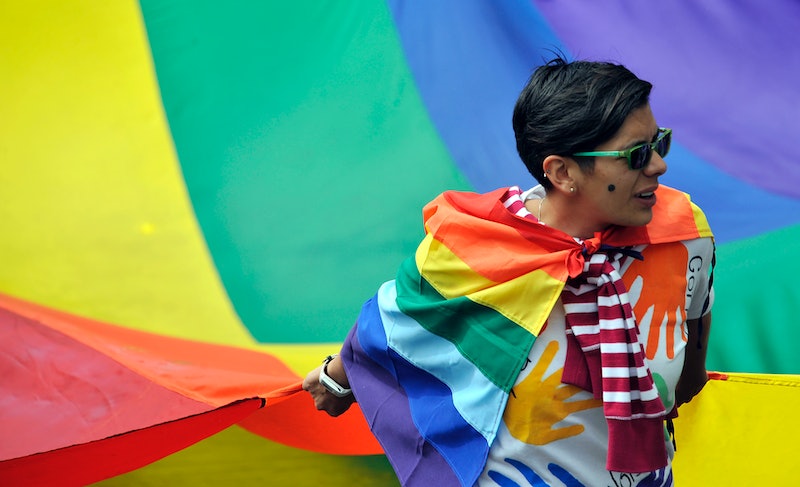 When I come out to people, I'm generally asked to explain why I use "queer" instead of lesbian to identify myself. There isn't really a short answer; there are a lot of reasons why I make this distinction for myself. But while I of course can't speak for anyone else, and each individual's definition of the word is deeply personal, a big part of it is the fact that "queer" is a word that actively resists definition — and the freedom afforded by such a term matters in a big way.

As I mentioned, what "queer" means will vary from person to person; in order to get an idea of some of the ways people might use the term, though, let's take a look at a few possible meanings. The University of Michigan's Spectrum Center offers two definitions for the word "queer," the first of which is, "An umbrella term sometimes used by LGBTQA people to refer to the entire LGBT community." While this definition is certainly true for many people, it's not the reason I categorize myself as queer; to be under the proverbial umbrella isn't something that all queer people want, and in fact, may wish to actively resist.

The second definition, however, is a little more involved, and it resonates much more for me and for a lot of queer people within queer communities. It reads:

An alternative that some people use to "queer" the idea of the labels and categories such as lesbian, gay, bisexual, etc. Similar to the concept of genderqueer. It is important to note that the word queer is an in-group term, and a word that can be considered offensive to some people, depending on their generation, geographic location, and relationship with the word.

Instead of being an umbrella term, this definition wants to be a fringe term or an alternative way for people to define themselves. That's powerful to me — so in that spirit, here are seven reasons I prefer to use "queer" instead of lesbian.

Perhaps somewhat ironically, "queer" can serve as a label for people who resist labels. It can mean something different to everyone, and generally those people who identify as queer probably aren't straight or cis, but might also not be strictly bisexual, pansexual, gay, or lesbian. Queerness can also apply to gender — to be genderqueer means to resist the binary. When I say I'm queer, it doesn't explicitly reveal my gender or sexuality, or my partner's gender and sexuality, which can be incredibly useful if neither my partner nor I fit into a male/female or gay/straight binary.

2. It's Important To Me To Reclaim Previously Harmful Language

"Queer" has historically been used as a derogatory term — and as sometimes happens with derogatory and historically oppressive terms, some members of the receiving group of the insult are reclaiming it. This means that instead of allowing their oppressors to insult or commit violence against queer people by using the term, queer people ay identify themselves with it to take the power away from the oppressor. To me, it's an important word not to shy away from, because it keeps power in my hands. However, it's also worth noting that to some people in the LGBTQ community, the word is still a painful slur. Both reactions to the word are valid and important.

Perhaps many of you have heard the word heteronormative — when binaries and heterosexuality are presented as the norm — but homonormativity is also something that exists. Within the LGBTQ community, homonormativity is the practice of deliberately or subconsciously policing bodies and opinions of LGBTQ people in order to encourage them to assimilate to mainstream, heterosexual culture. For example, the movement for marriage equality is built on the homonormative idea that LGBTQ people want to and should participate in the institution of marriage — something which is largely part of a heteronormative culture. By identifying as "queer" instead of "gay" or "lesbian," I am refusing assimilation into mainstream politics and culture, which is important to me as someone who doesn't always agree with either of those things.

While many gay and lesbian communities are overwhelmingly cis, monogamous, and white, many queer communities are non-gender conforming, sexually fluid, and have varying levels of monogamy. For me, identifying as queer means aligning myself with a community that shares my values.

6. It's A Helpful Term If You're Not Strictly LGBT

Many people know that they're not straight or cisgender, but they don't quite feel that they fit L,G,B, or T properly. As such, "queer" can be a fantastic umbrella term as they explore their identity, and also certainly after they get closer to figuring it out.

Calling myself "queer" gives my sexuality and gender room to grow, breathe, and evolve. Nothing has to be static, and the freedom to change is one of the most important ones there is.