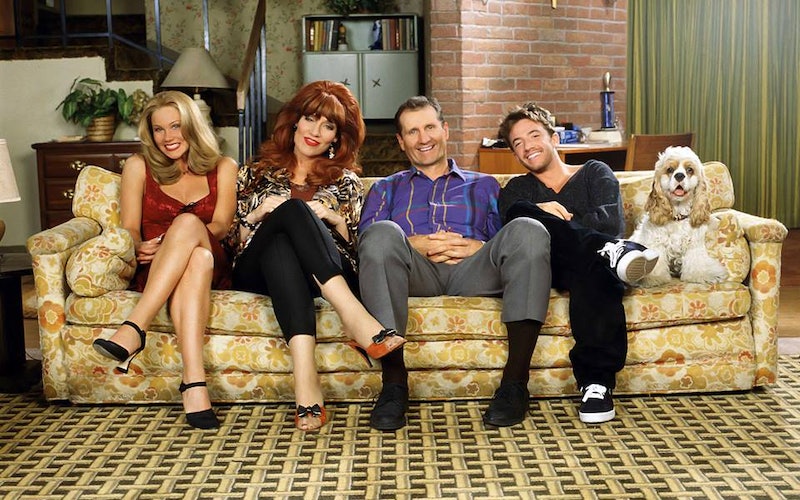 Looking back now, the '90s seem like an innocent time of flannel, Tamagochis, boy bands, and more. On television, the decade was the era of NBC's "Must-See TV," and ABC's "TGIF" lineups, along with the dawning of The WB's teen dramas. But there were certain shows that weren't "must-see" for all ages — because they were "adult" '90s TV shows that your parents would never let you watch. I mean, some peoples' parents are more strict than others when it came to regulating TV consumption, but still, there were a lot of '90s shows that weren't meant for kids — and you probably didn't understand them as a child, either.

These days, there are so many options for TV watching, it's hard to know where to start — Netflix, Hulu, HBOGo, all the shows taking up your DVR, or good ol' live TV (if you even watch that anymore). On most of those platforms, profanity and nudity can be used, envelopes are pushed, and not much is sacred anymore. Back in the '90s, everyone mostly just turned to the broadcast networks and cable for their TV fixes.

Here are some of the '90s TV shows that your parents wouldn't let you watch — but you might have still tried.

Can you believe that this long-running cartoon was seen as "rude" and "crude" when it first premiered in 1989? In 1992, then-President George H.W. Bush said in a speech, "We are going to keep on trying to strengthen the American family, to make American families a lot more like the Waltons and a lot less like the Simpsons."

The glamorous teens of West Beverly High drove expensive cars and got themselves into many adult situations, like pregnancy scares, drug addiction, sexual assault, and mental illness.

As a spin-off of Beverly Hills 90210, the nighttime soap did not hold back when it came to the lives and loves of the tennants of a Los Angeles apartment complex. Remember Kimberly? Enough said.

The HBO comedy ushered in an era of frank female discussion about sex, love, and cosmopolitans.

It's no wonder Tony Soprano had anxiety — the critically-acclaimed HBO drama had lots of whackings, sex, strippers, and violence. Definitely not suitable for kids.

It's hard to believe this wacky and mature cartoon (which featured so many nipples) once aired on Nickelodeon as a kids show.

This isn't your mom's alien TV show. The Fox series often pushed the envelope with many scary stories that'll even haunt you in 2016. For instance, check out the legendary episode "Home." You'll never forget it.

This Showtime series was about sexual awakenings and, well, lots of sex.

This ABC police drama always seemed to have an intimidating "Viewer Discretion is Advised" warning before each episode, and it tackled the heavy topics. Also, three words: Dennis Franz's butt.

They killed Kenny! And any notion that cute cartoon kids could be just cute and innocent — this daring Comedy Central comedy never shies away from biting satire or simply being gross.

Even though you may not have been able to watch these shows in the '90s, you sure can enjoy them now and get nostalgic.