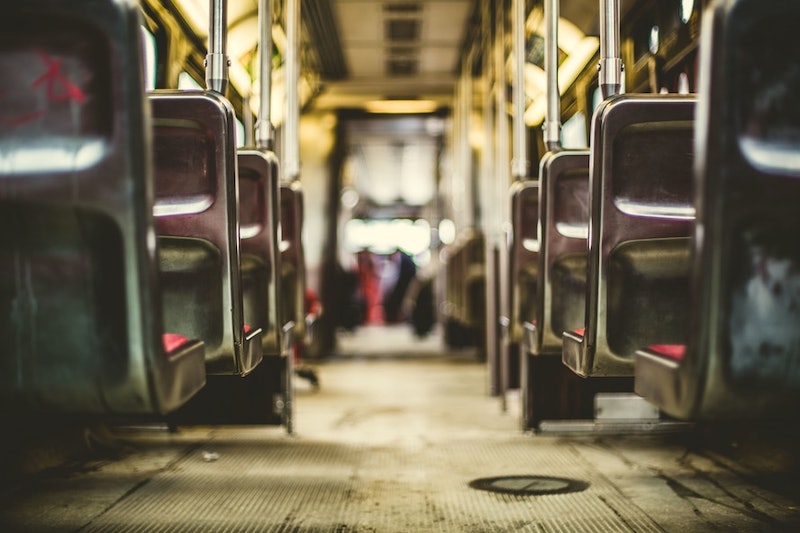 After working in a daycare center, followed up by an airport, something in me clicked, and I learned a rather life-changing lesson: Don't. Touch. Anything. Every surface is teeming with bacteria; and don't even get me started on public transportation. Have you ever wondered how dirty the subway is? It's probably filthy, right? Crawling with germs, right? Well, it turns out germaphobes can rest just a little easier, because a new study found that it might not be as dirty as you think.

A study published in the American Society for Microbiology tested the seats, walls, and poles in three different cars belonging to the Boston subway system, and the findings were rather interesting: While the surfaces were indeed covered in microbes (big surprise), they weren't the kinds that can hurt people. What's more, most of the microbes found already exist in our bodies; and in some cases, they exist in greater quantities. Yes: The inside of your body is dirtier than the subway.

Kidding. But you get the idea.

Now, I'm not telling you to go ride the subway and then lick your fingers afterward. But the point is that if you're a generally healthy adult, you don't really need to be concerned.

Our immune system — which is made up of cells, tissues, and organs — works to protect us from illness. Our white blood cells (also known as leukocytes) also play a huge role in fighting off the bad germs. So, our bodies are always working hard at keeping us healthy and protected. Still, be sure you properly wash your hands throughout the day — something we should all be doing no matter what. And if I'm being honest with myself, I don't care what any study tells me: I'm still going to open doorknobs with my sleeve.

It's important to note one limitation of this study: It focused on the subway system in Boston, so we can't really draw any conclusions about other subway systems from this study alone. Regardless, it's comforting to know that public transportation isn't automatically going to give you some infectious disease.

This isn't the only study that has looked at germs on subway systems. A team of scientists in New York once spent 17 months collecting microorganisms from the New York subway system, and their findings seem to back up the previous study — that we really shouldn't lose sleep over subway germs. Ironic, considering some of their discoveries: Almost half of their samples didn't match any known organism; 31 percent could affect immune-compromised people; 28 percent were resistant to standard antibiotics; and some were found to be associated with anthrax and the bubonic plague.

Still, at the end of their study, they insisted that subway passengers shouldn't be scared and are not in danger.

To be completely transparent, this study has the same limitation as the previous. Furthermore, it's an extreme example, since the New York subway system is the largest in the world, moving 5.5 million people each day. And finally, the study has been criticized for publishing misleading results. Does that mean we should disregard it? No. Should we be responsible and read from a variety of sources? Sure!

What's the takeaway, considering some of these mixed messages? It sounds like as long as you keep your hands away from your face and wash regularly, the subway should be your friend, not your enemy. If you can avoid touching surfaces directly, do so. And please don't be one of those people who sneezes into their hand and then grabs the pole. Thank you kindly.