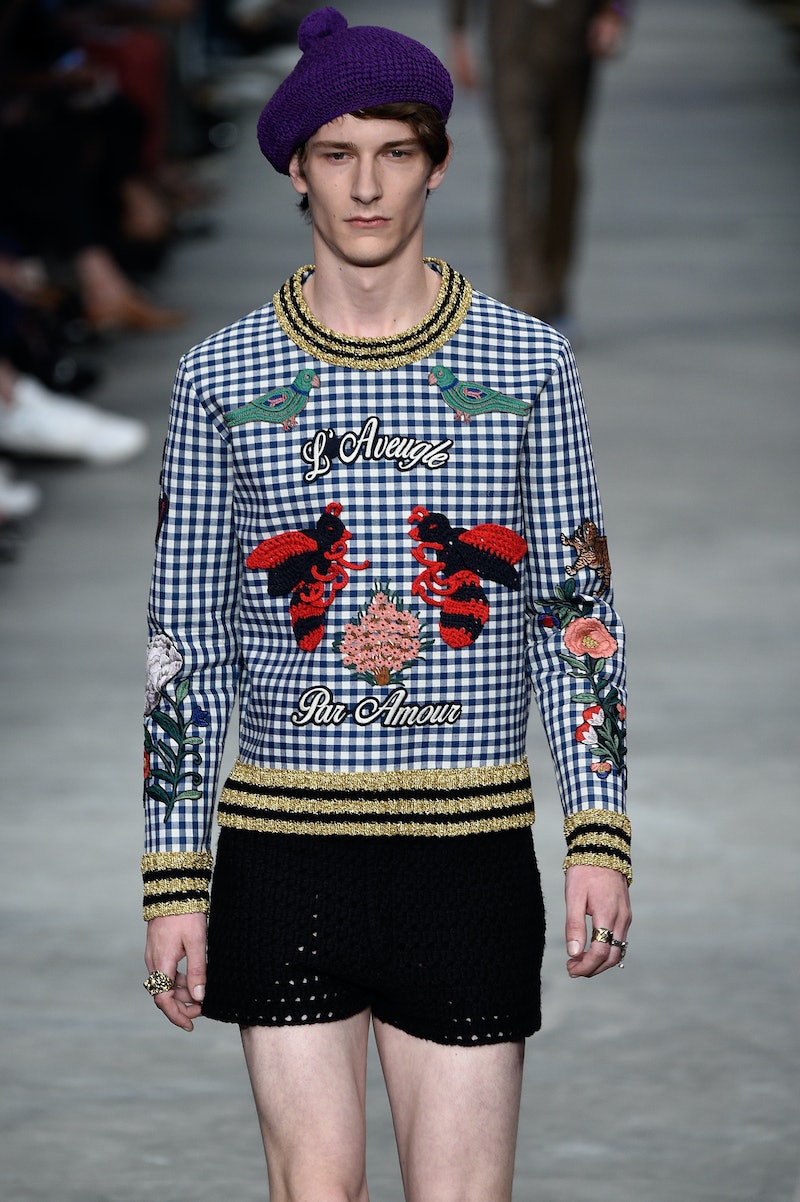 Since childhood most of us have been taught that there are "boy clothes" and "girl clothes," and one didn't encroach on the other. But there are commonly feminine pieces that anyone can wear, regardless of gender. Why? Because it could be argued that times are slowly changing. While we were in grade school, girls were taught that they wore dresses and bows, while boys typically wore pants and polos. Sure, girls could wear trousers and shorts if they so chose, but you wouldn't see many boys show up to class in skirts or tights. While masculine items seem to be wildly accepted as universal, feminine pieces have a habit of being rigidly assigned to one gender.

That is, until now. In the past couple of years the sartorial world has seen a push towards a more androgynous look, where the issue of gender seems to play a smaller and smaller role when it comes to getting dressed. Men walk down runways wearing skirts and floral designs, looking like they borrowed from a woman's closet. Picking up on that thread, let's keep a good thing going and look at all the commonly feminine fashion items that all genders could wear. Get ready to become inspired.

In the humid, hot blaze of summer, everyone should be allowed to wear the booty shorts that were so popular in the '70s. Why should only women enjoy the relief that is zero fabric sticking to their thighs? Slash why do we think cargo Bermuda shorts are somehow sartorially less obscene than a big flash of thigh? No matter your gender, enjoy a short hem if you want to.

Jaden Smith opened up our sartorial minds when he went to prom wearing a minimalist dress and baggy blazer, proving that all genders could pull off a shift seamlessly.

While for years most women and festival-goers have been enjoying the playful aesthetics of crop tops, it's time to broaden the shirt's scope. You don't have to be a fit twenty-something female to enjoy this option — you can be 75, curvy, and any gender when it comes to this sassy top. As long as it speaks to you, take it along to the changing room.

While images of Dolly Parton in the '80s classic 9 to 5 could come to mind when one thinks "pussybow," the detail doesn't only have to be earmarked for feminine women. The option is open to everyone's interpretation. It could work as a bold subversive move, a classic detail in one's outfit, or just a playful dalliance in a new look to shake things up in your wardrobe. When it comes to the pussybow, one doesn't need to adhere to gender limitations.

The mini skirt could be played up to flirty, feminine proportions or played down to masculine toughness, or left in a neutral space somewhere in between. The point is it's actually a very versatile piece, and shouldn't be met with raised eyebrows if worn by someone outside of the female gender. Fashion has too many possibilities to be restricted in such a way.

Images of chic French women or 1970's college girls might come to mind when one thinks "beret," but it's a piece that could be enjoyed by all genders. Whether you go for an understated beatnik one or a Steve Zissou inspired one like in this Gucci example, if it matches your outfit you should feel comfortable trying it on.

While florals might feel strictly feminine, they can actually look amazing on any garment. Take this Agender catalog photo as an example — no matter the wearer's gender, you have to admit those pants look bomb when matched with a tie-dye shirt. That fact doesn't change.

It's often times seen as unmasculine or inappropriate if someone that's not female plays with wild motifs and look-at-me patterns. But after looking at examples I think it's safe to deduce that anyone with a playful personality and an eye for mixing and matching shouldn't be denied the fun of pattern clashing. Why would someone's gender stop them from expressing themselves?

Regardless of your gender identity, if you have long hair that's prone to fall into your face you should be able to scoop it back with a chic headband. No arguments.

If you don't like the proportions your long knit sweaters are giving your look, feel free to try on a cropped one instead. Flashing a little belly has never hurt anybody.

If the look becomes elevated or complete with a sweet pair of flats (rather than, lets say, boots or loafers,) then the option should be available to you. Shoes shouldn't hint at anything about our gender or sexuality — fashion can be completely detached from that.

Clothes are there to have fun with, be creative with, and as tools to best express ourselves to the world. Because of that, it's time to stop looking at certain items as "hers" and "his" and instead see it as "ours." Think of the possibilities if we got on board with that idea.