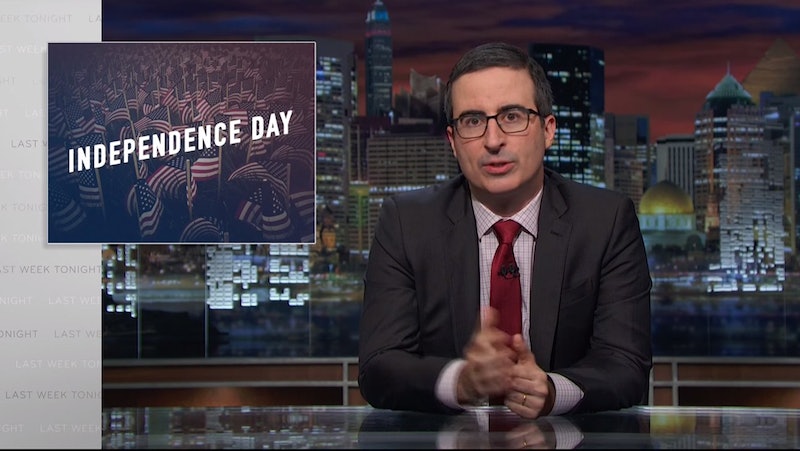 Last Week Tonight may be on hiatus until the end of July, but host John Oliver has an Independence Day message for Americans. The comedic host broke his show's temporary summer hiatus Monday with a web exclusive listing all that America lost when it declared its independence from Britain in 1776.

In an effort to remind Americans busy celebrating their nation's independence this Fourth of July of all they left behind when the United States broke away from Britain, Oliver put together a short list of four things America lost when it gained its independence.

"Since 1776 you've done very well as a nation but it might be worth thinking about just a handful of things that you gave up when kicking Britain unceremoniously out of this country," Oliver says. "First, there's the matter of your accents. These beautiful vowel sounds could have been yours but instead, from sea to shining sea, you speak like you just burnt your tongue on a hot apple pie."

Bowler hats, cuisine, and pessimism round out the list of things Americans gave up in exchange for sovereignty. Among the British cuisine denied to US citizens are meat pies, which Oliver describes as "a lot like British people themselves: a hardened outer layer gives the impression of composure but under the surface, it's just a hot fucking mess."

But sexy accents, fancy headwear, and hot meat pies all pale in comparison to the thing Americans should be most upset about missing out on. "The thing that Americans are really missing out on is pessimism," Oliver says. "Americans are optimistic people who believe the sky is the limit whereas in Britain we are painfully aware of our limits... British people never make the mistake of developing self-esteem because no matter what we achieve deep down we know we'll never be as good as the Queen, which is to say, an elderly woman who frowns for a living."

But with Britain still sorting itself out in the wake of June's European Union referendum — in which the country voted to leave the 28-member bloc — the British comedian and Last Week Tonight host concludes there may be no better time to be free of English rule. "Take a moment on this July the Fourth to think about all that you've left behind and I think you'll realize, honestly, you're probably way better off the way that things are," Oliver says.

New episodes of Last Week Tonight are not slated to return to HBO until July 24, leaving fans like myself to battle some serious John Oliver withdrawals.