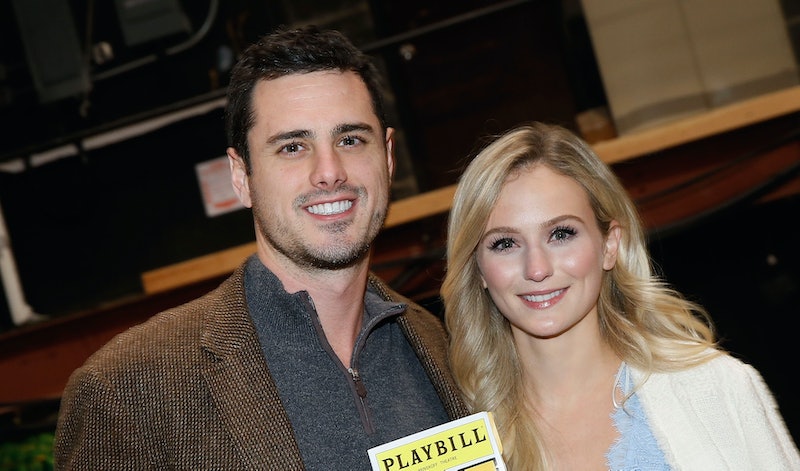 The Bachelor and The Bachelorette are compelling television shows, no doubt. These days, though, social media has added a whole new aspect to reality TV, since, you know, the show follows the real lives of people, which is also reflected on Snapchat, Instagram, and Twitter. It's a fascinating look into the lives of the contestants and you'll want to fire up that follow button, because there are so many Bachelor and Bachelorette stars Snapchat names worth adding to your follow list. The story-building app seems to be where it's at right now and Bachelor Nation is following suit.

With all the information out there about The Bachelor and The Bachelorette, sometimes spoilers occasionally fall through. Last year, Bachelorette Kailtyn Bristowe accidentally spoiled the winner of her season by posting a cuddly snap of her and eventual winner Shawn Booth. Whoops. But even if spoilers aren't being snapped, the Bachelor and Bachelorette folks' Snapchat accounts give the sense that yes, these are real people with real lives. And while you’re on a fab follow spee on the app, Bustle’s Snapchat (bustledotcom) is worth a follow, too.

Check out the following Bachelor and Bachelorette Snapchats below and get your follow on.

This season's Bachelorette is a must-follow.

Get a glimpse of JoJo's frontrunner for her heart.

The host with the most is on the app, too. He's usually talking about all of the contestants, so Harrison's Snapchat is a fun window into what the host's like is actually like.

There are no more spoilers to be had (I think), but it's still fun to follow the adventures of her and Shawn.

Former Bachelor Ben Higgins isn't on the app, but his fiance Lauren is and she's documenting all their engaged fun.

The Bachelorette contestant and his protien shakes was eliminated by JoJo, but you can keep track of his workouts on Snapchat.

He and new wife Jade Roper are too cute and now they've taken their adorableness to their precious snaps.

Are you missing cutie Wells on The Bachelorette? Me too. At least there's Snapchat to still follow his post-show life.

He's still in the running for JoJo's love, so Snapchat is a nice glimpse into what he's feeling as he's watching the show.

The former Bachelorette posts fun filters, as well as snaps of her dog and current pregnancy.

The tell-it-like-it-is former attorney and Bachelorette takes her smarts to her snaps.

The former Bachelor villain turned commentator is definitely worth throwing a follow to.

So now that you've got all your Bachelor and Bachelorette Snapchat followings, it's like you can have the shows with you 24/7. Technology is so great.

More like this
JoJo Fletcher & Jordan Rodgers Got Married In A “Playful & Fun” Wedding
By Grace Wehniainen
Becca Tilley Confirmed Her & Hayley Kiyoko’s 4-Year Romance With A Heartfelt Note
By Brad Witter
What’s New On Netflix: 'Stranger Things' & 'Somebody Feed Phil' Return
By Arya Roshanian
Twitter Has Very Mixed Feelings About The New 'American Idol' Winner
By Jake Viswanath
Get Even More From Bustle — Sign Up For The Newsletter