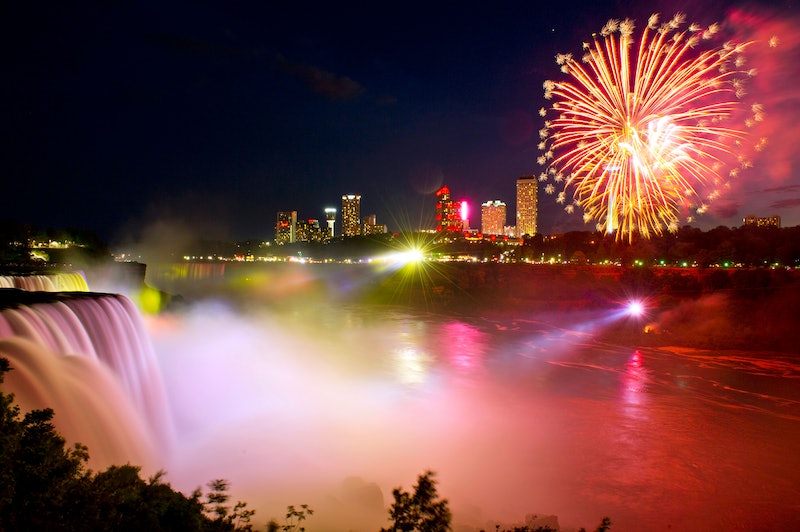 Across the U.S., this year's Independence Day was more than an excuse to wear starred and striped leggings with a fanny pack; it was also an excuse to stay up late on a weeknight watching the rockets' red glare and the (celebratory) bombs bursting in air. If you didn't stay up late, the best July 4 fireworks photos will show you what you missed this year.

It was expected to be one of the most heavily traveled and most tightly secured Independence Days in recent history this year. More than 43 million Americans were expected to travel during the holiday weekend, with the large majority of them hitting the country's highways, according to American Automobile Association (AAA). Those who headed to the airport may have seen longer security lines, as transportation security officials announced last week that they would increase security around airpots, ports, and train stations in the wake of recent terrorist attacks in Brussels and Istanbul. Tighter security measures were also planned for public celebrations in large cities like New York and Chicago, according to Reuters.

In some cities, such as Washington, D.C., and Baltimore, Maryland, rain threatened to wash away some of the planned festivities. In the end, plenty of shows did go on and plenty of fireworks went off. The displays lit up the country's skies and the world's social media platforms in an oh-so-American way. Here are 18 of the best July 4 fireworks photos from around the country:

Where cloudy skies didn't prevail, fireworks lit up the nation's skylines on Monday night, from sea to shining sea. It's an historic tradition that dates all the way back to America's first birthday — when long airport security lines and millions of people on the roads weren't a concern. This year, those concerns, and others, were present, but Fourth of July celebrations continued as celebratory as ever nonetheless.

More like this
What To Know About Taking More Than 1 Piriteze Per Day
By Bustle UK
The 6 Best Balaclavas To Keep Your Face, Head & Neck Comfortably Warm
By Jenny White
How To See The Lunar Eclipse On May 15-16, 2022
By Kaitlyn Wylde
30 Expensive Mistakes You Don't Realize You're Making With Your Car
By Claire Epting
Get Even More From Bustle — Sign Up For The Newsletter